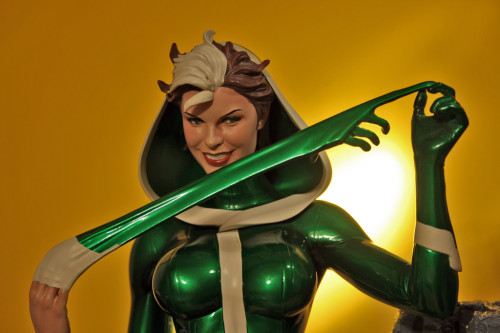 The next statue in Sideshow’s line of Adam Hughes Marvel girls is here, and it features The X-Men’s very own Rogue.

One of the most striking things about these Adam Hughes statues is their scale. Rogue stands a full 16″ tall and is in scale with the previously released Emma Frost, Mary Jane, and Black Cat. The other most striking thing about this line is that it features some exaggeratedly alluring poses and looks from some of Marvel’s most recognizable females. The statues got some mainstream publicity when the media flew into a frenzy to create a controversy about the Mary Jane statue, which only served to help sell that one out and drive its secondary market value up. There hasn’t been a whole lot of buzz about the Rogue comiquette, but she’s definitely deserving of attention and praise. 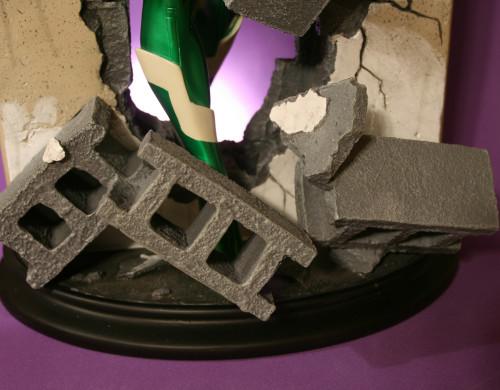 Sideshow and Adam Hughes opted to go with a short-haired version of Rogue, dressed in her green and white costume with the cowl raised. Baring only her face and one hand, Rogue is the most clothed of the Hughes comiquettes to date (Black Cat comes close, but her low zipper trumps a partially ungloved hand). We find Rogue grinning as she steps easily through an exploding block wall. The falling blocks are a neat addition and look nicely suspended in air when you get the whole statue assembled and displayed. 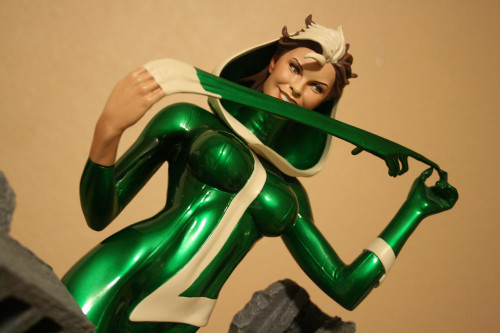 The statue comes in the box in six pieces: the base with wall segment, the Rogue figure, Rogue’s right hand and glove, and three block pieces. It all comes together fairly easily, except for the hand and glove. You should be able to slide the right hand into the right wrist via a peg and hole assembly, and the fingertip of the glove should fit between the fingers of the opposite hand. There’s a common problem with this statue that cropped up with mine as well that has the right hand not fitting exactly correctly into the peg, causing the glove not to go between the fingers in just the right position. I was able to fudge mine by carefully manipulating the glove tip around the left hand. I was pretty successful but advise caution, as it would be extremely easy to break this thing. 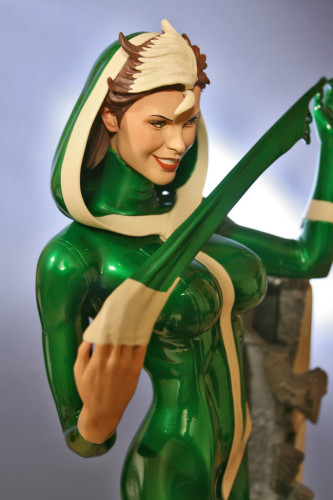 Assembly woes aside, this is one very nice collectible. As an added bonus, the Sideshow exclusive version of the statue comes with a print of Adam Hughes’ control art, on which the statue was based. That’s the edition I got and couldn’t be happier. 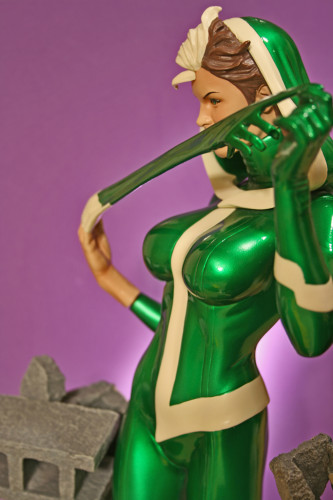 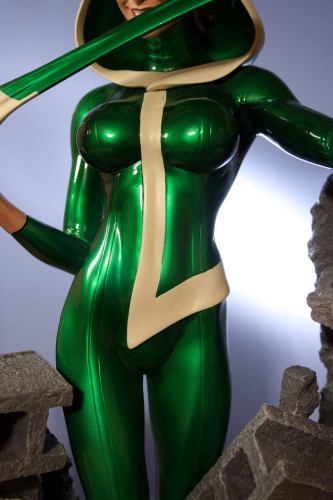 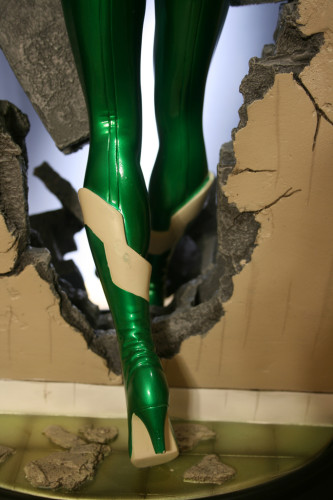 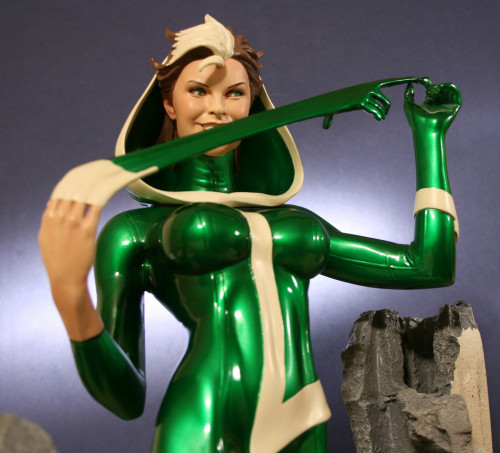 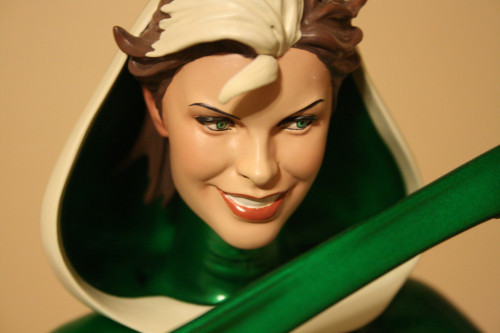 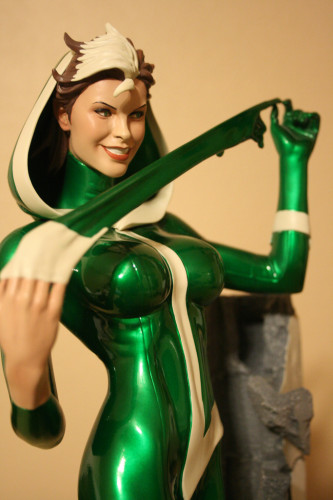 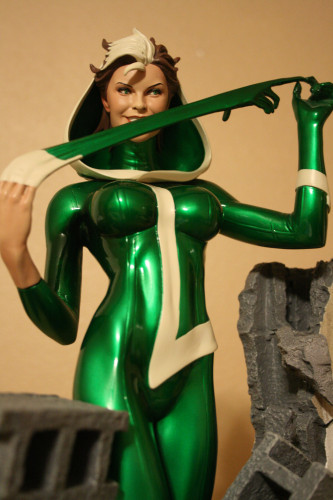 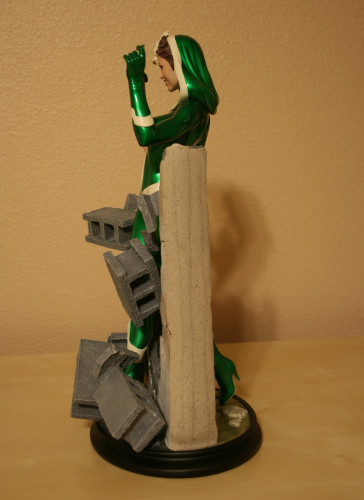 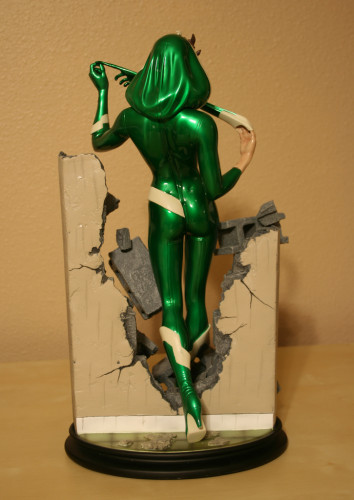 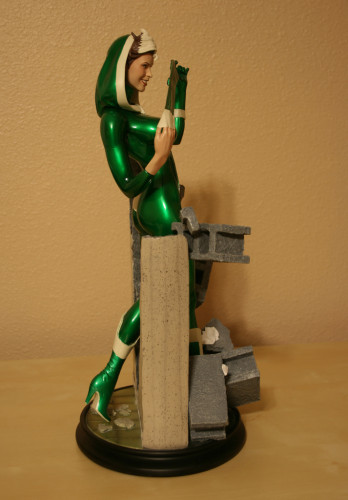 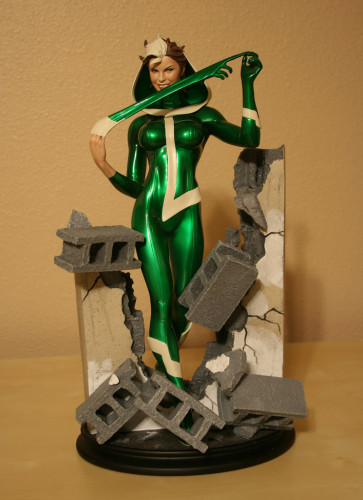