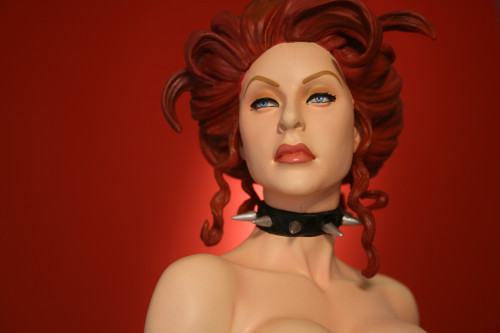 Adam Hughes has a long reputation of being a “good girl” artist. That is, he is known for his gorgeous comics illustrations of heroines and the nicer set of comic book females. His line of comiquette statues from Sideshow Collectibles so far has reflected his penchant for good girls, but the newest release takes a detour into villainy with the Black Queen Comiquette.

The Black Queen is Jean Grey’s Hellfire Club incarnation from the classic X-Men Dark Phoenix Saga storyline in which she was mind controlled into eventually unleashing deadly and apocalyptic powers upon the world. The pose chosen for this representation of Jean is appropriately aloof, her head held high while her black cloak swirls around her legs and feet. Jean holds the obligatory black whip in her right hand, and her corset and underwear leave little to the imagination. Despite its accuracy to the comic book story, this isn’t a collectible for the kiddies. 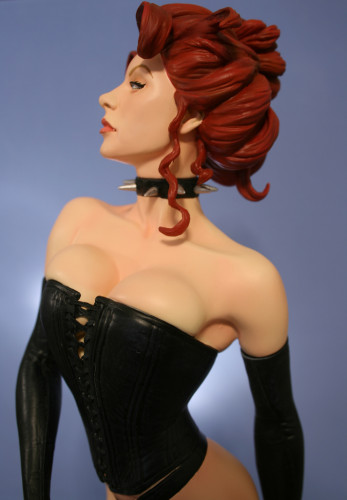 Two versions of the Black Queen Comiquette were offered: a standard one with an edition limit of 1500 pieces and an exclusive one that comes with a print showcasing Adam Hughes’ control art for the piece that is limited to just 850 pieces. The statue itself is identical between the two editions. Jean stands 16.5″ tall, making for an awesomely imposing statue. The sculpt and paints on this one really are impressive, and I would go so far as to say that this is the best of the Adam Hughes line to date. That’s really saying something, given the high quality of the previous releases. 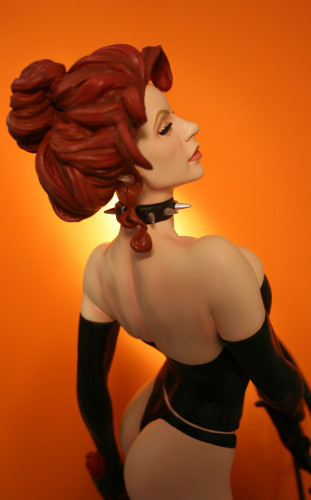 When Sideshow initially advertised the prototype images of this statue, I wasn’t overly impressed with Jean’s face. This is one of the rare situations, however, where the final production statues look better than the prototypes. The face beautifully conveys emotion, and even the curly tendrils of hair are excellently sculpted to translate a haughty head toss. The whip is highly detailed and molded from a semi-rigid material, a great choice, given the skinny parts that would be easily breakable if it were cast from polystone like the rest of the piece. Jean’s cloak is similarly impressive, swishing around the base of the statue and giving the whole piece an amazing dynamic quality. I think the cape really is the dealmaker for me on this one. 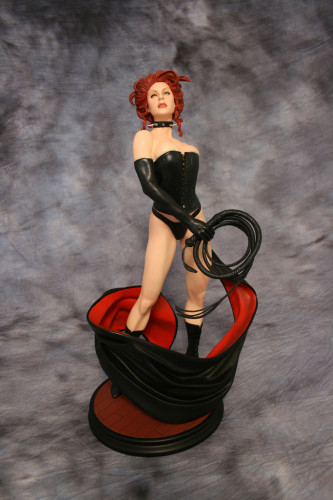 I previously reviewed Bowen Designs’ take on the same character, and it would be hard to review the Sideshow piece this soon afterwards without drawing some parallels and comparisons. The first and most obvious difference between the two statues is scale. Bowen presents Jean Grey in their typical Marvel statue scale, standing around 12.5″ tall. Sideshow, on the other hand, goes with their own typically massive scale, clocking Jean Grey in at a full 16.5″ tall, right in line with the other figures in their Comiquettes line (I previously reviewed Dagger and Rogue). The second difference that will jump out at you is that, while the Bowen Black Queen is properly tarted up in black lingerie, the Sideshow version is the much more “mature” one. From anatomical sculpting choices to the briefness of the costume to the basic pose, Sideshow’s statue is heavy on the cheesecake while Bowen’s is more about representing the character in a typically Bowen museum pose. If you’re going to choose between the two, I personally think the Sideshow statue is the most dynamic, but it really just comes down to your own collecting tastes and what sort of panty-clad woman you feel comfortable displaying in your home. 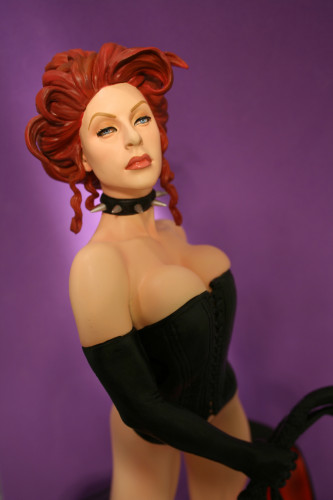 I am a big fan of Adam Hughes’ work in both 2D and 3D, so adding this statue to my collection was a no brainer for me. It’s definitely not a piece for those who would feel uncomfortable displaying some gratuity among their comic heroes, but it really is an accurate portrayal of Jean Grey at that point in X-Men history. The Black Queen Comiquette is a great statue for fans of the Dark Phoenix Saga, of Adam Hughes, or of Sideshow’s female statue line, and I readily recommend this one, provided you’re in the target demographic.