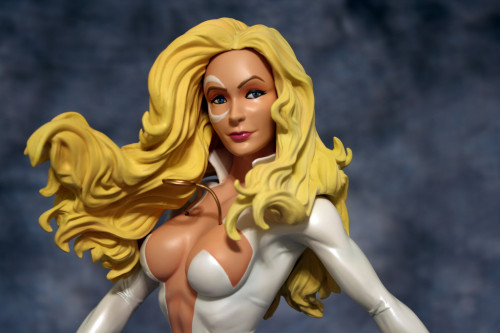 Sideshow Collectibles is one of the most popular companies turning out pop culture collectibles these days, and the newest piece in their Marvel statues line validates their popularity. Here’s a look at the recently released Dagger Comiquette.

The only thing I like better than consistently awesome quality in a collectibles line is consistently awesome quality following a theme, and that’s what Sideshow has been excelling at providing for the past several years. It’s not enough that they have some of the best looking high-end collectibles featuring characters from Star Wars, Marvel comics, Lord of the Rings, and Buffy, but now they also have some fantastic comic book talents tied in with the projects. 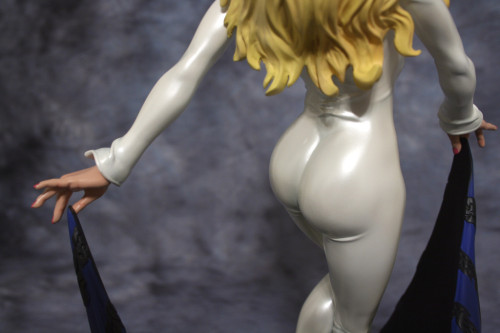 It started with their still-running line of superheroines designed by Adam Hughes. I’ve previously reviewed some of those statues, including the marvelous Rogue Comiquette from 2008. Now Sideshow has added another top-notch artist to their creations in the form of Mark Brooks, perhaps best known for his work in the Marvel X-Men universe. The Dagger Comiquette is the first release in a new series featuring heroines designed by Brooks, and she’s a stellar start to the line. 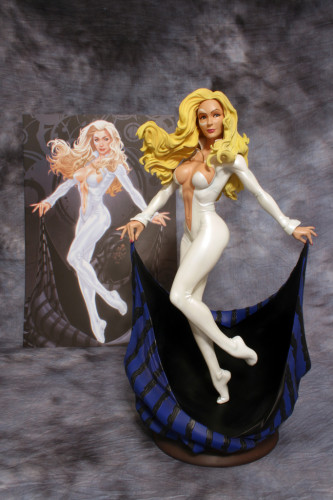 The original art upon which the statue is based has Dagger floating up from Cloak’s, well, cloak, and holding the draping edges in her hands. This statue faithfully recreates the scene with the one notable exception that Cloak’s head is omitted from the final production. A limited print of Brooks’ art is the special pack-in with the Sideshow exclusive version of the statue and will look great displayed alongside it. 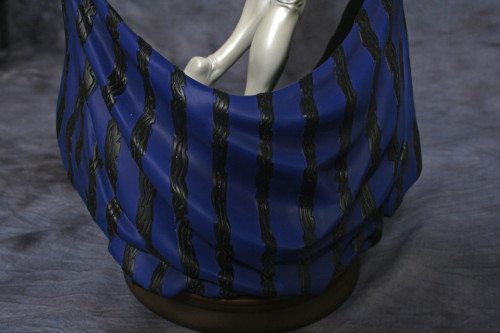 The comiquette comes packaged in three pieces in the box: Cloak, which serves as the base; Dagger’s gold necklace; and Dagger herself. A large peg in Dagger’s foot inserts easily into a hole inside the Cloak base, but you’ll want to be careful while setting her up. Her hands are positioned to mimic holding the cloak’s edges, so there’s not a lot of wiggle room. If you pop her onto the base too quickly, you just might amputate a few of her fingers. Once Dagger is safely ensconced in the base, the real fun begins: fitting her with the necklace. There are two holes in Dagger’s chest, where the ends of the necklace can fit. The necklace is positioned to be flipping upwards as in the art, but I had some trouble with getting it all to look right. In the end, I had to carefully bend the necklace piece a little before again attempting to insert the ends into the chest. Again, be careful here. With too much haste you just might break the necklace and / or scratch up Dagger’s chest. 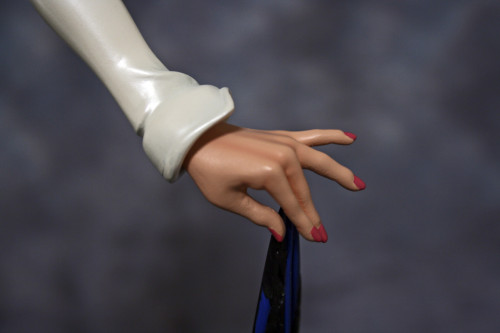 The sculpt and paint job on this one are superb. I would have preferred a little shading and variance in the skintones and hair (both are just painted as flats), but those are small quibbles. This is a top notch statue, and there’s very little to complain about. She really looks like she flew right out of the comic books. 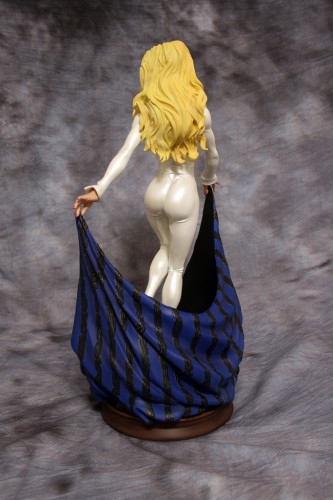 Aside from the paint flatness, my only other complaint with the statue is with the necklace. Having it flip up in the air does convey motion, but it also looks a little silly. Compounding that, the holes in Dagger’s chest are a bit too big for my taste. Even after inserting the necklace, you still can see the edges of the holes bordering it. This definitely is not a deal-breaker, though. The quality of the rest of the statue more than makes up for these little problems, and I have no hesitation in recommending it to fans of Marvel, Mark Brooks, and Sideshow’s female figurines. 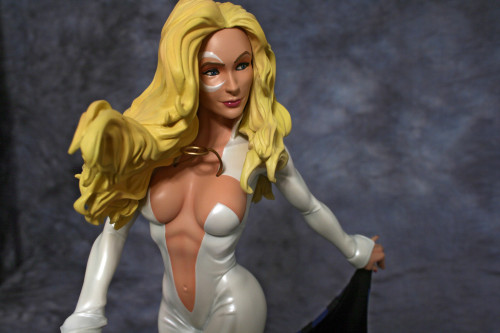 Dagger stands around 17″ tall. The standard edition of the statue is limited to 1000 pieces, while the exclusive that comes with the Brooks art print is limited to 500. Both are sold out from Sideshow now, but you can get onto the wait lists for both versions and hope to score your own Dagger if and when they become available again.