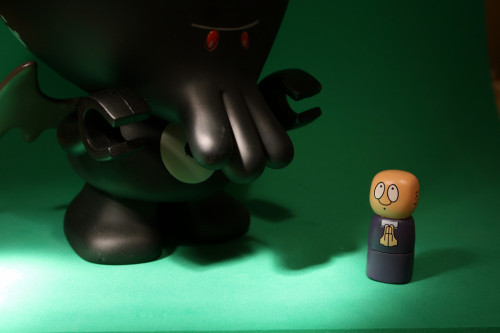 I’m a big fan of Cthulhu and most things Lovecraftian, and I loved the previously released My Little Cthulhu figure, so I couldn’t pass up the new Dark Edition of the figure. Here’s a look at the little fella and his two unfortunate victims.

The My Little Cthulhu toys are designed by John Kovalic, creator of the hilariously geeky Dork Tower comic, and they’re produced by Dreamland Toyworks. I like Kovalic’s art style a lot, and I really enjoyed the original My Little Cthulhu with the green paint scheme. One would think that the new Dark Edition would deliver the same awesomeness, just with a new paint deco, right? Well, not quite.

Dark Edition Cthulhu’s sculpt is exactly the same as the original. He has an enormous noggin, little wings on the back, and little arms with Lego-like hands. The legs are part of the body and definitely unmoveable. The head and arms, however, look like they might be poseable, but I haven’t been able to reposition them and don’t want to use too much force, lest I end up with a headless and limbless Elder God. The paint scheme looks good overall, but I don’t really like the grey “O” they chose for his belly. The original MLC has a yellow “O” there that just looks like patterning over the green. On the Dark Edition, it looks like a weirdly enormous belly button. That aside, I like the blacks and greys chosen for his body and spots, and I like the red eyes and brown wings. 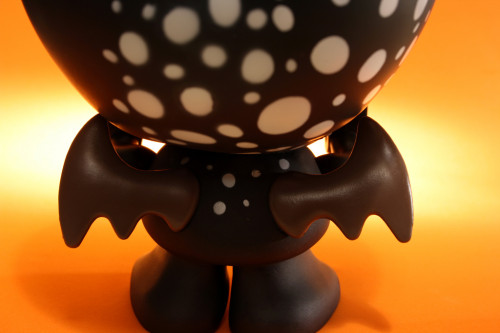 The awesomeness starts to break down when you look at how it all really comes together. I think it boils down to unfortunate choices or conditions in the factory where this guy was produced. The paint deco by and large looks good, but the grey spots on Cthulhu’s back are strangely smudged and faded in some places. It looks to me like the paint was applied and then blotted off or rubbed against something before it was dry. I also have issues with the arms and wings. The basic body and head are produced from a standard PVC common to lots of collectibles like this. The arms and wings that were attached seem to be from some different sort of plastic that feels somewhat sticky. The wings only suffer slightly from this, but the arms are a mess. They are much shinier than the rest of the figure, and they feel very sticky to the touch. I’ve had old action figures get that feel years and years after production, once the chemicals in the paints and plastic start reacting and breaking down. I wonder if there’s a similar reaction already going on here. 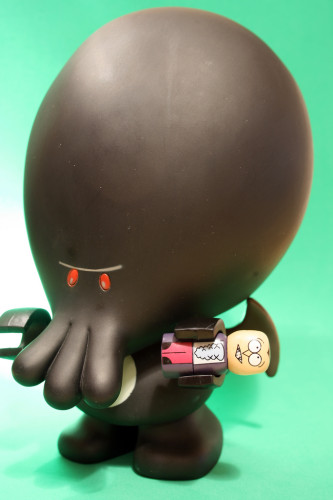 The Dark Cthulhu comes with two victim figures, just like the previous one. This time they are a little praying man and a Lugosi-esque vampire. Each of the little figures is segmented into three parts: the head, the upper torso, and the legs. You can pull them apart to let Cthulhu have some dismembering fun. Or at least you can in theory. Try as I might, I couldn’t get either of these guys to pull apart at all. It took some time and force to pull apart the figures that came with the green Cthulhu, but these new guys just won’t budge. I suspect it could be something to do with the paint on the different segments sticking together or maybe the plastic connectors forming some sort of bond. Whatever the reason, it’s kind of disappointing that they won’t pull apart. 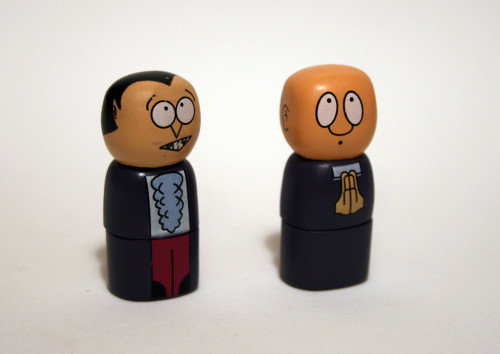 Functionality aside, there are issues with the paint on the little figures as well. For the most part the paints are okay and represent Kovalic’s art well, but it really looks like these guys went through a rock tumbler after being made. There are scuffs and scrapes in numerous places, and the paintjob is rubbed off in enough places to make the figures unfortunately unsightly. My vampire’s mouth is scuffed to the point of absurdity, and he also is missing a chunk of paint from the top of his hair. The praying man didn’t fare much better.

In planning and concept, this variant on the My Little Cthulhu figure is a cool idea and a great collectible. It’s just unfortunate that the final execution leaves so much to be desired. I have a very hard time recommending this one to anyone, due to the shoddy paints, weird sticky plastic, and roughed up mini figures. If you want a Cthulhu, go with the original green version. 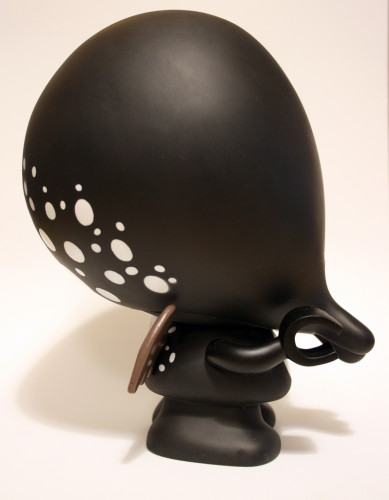 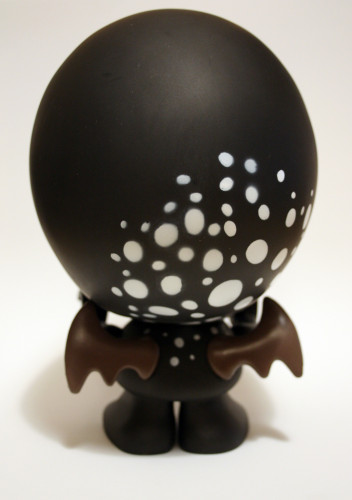 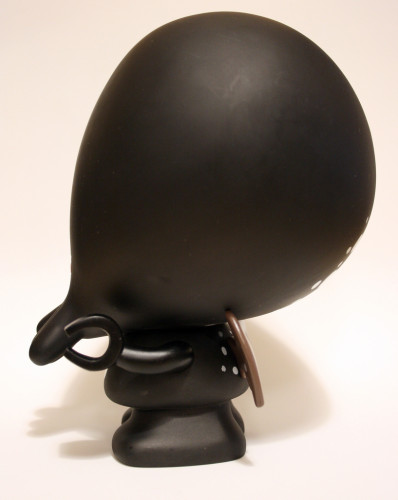 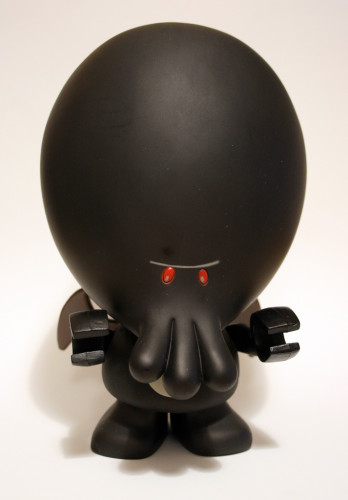