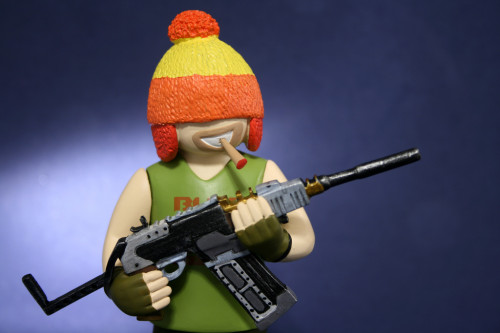 Quantum Mechanix has been cranking out some really cool animated-style sci-fi collectibles, from their recent Stargate SG-1 Teal’c to their upcoming Battlestar Galactica pieces. As far as I’m concerned, though, the line that put them on the map is their Little Damn Heroes series of Serenity characters, chibi-fied up. Mal and Kaylee were the first two releases in the line, and the third, just released, is none other than Jayne Cobb.

The LDH line is, appropriately, little. Jayne, limited to 1000 pieces, stands somewhere around 4.5″ tall and is presented with three iconic pieces: his trademark hat, his gun “Vera”, and his Blue Sun t-shirt. In true Jayne fashion, he’s sculpted proudly cradling his gun, a cigar chomped in his mouth. The design choices on this one make Jayne look a little goofier than Mal or Kaylee, but somehow it works.

Jayne ships in four pieces in the box: the main figurine, the base, Vera, and the cigar. You’d think assembly would be a snap, but that’s just not the case (unless you’re referring to the “snap” of Vera’s stock breaking off). Luckily I Googled the Jayne statue before I did anything to damage it, as I just couldn’t figure out how to get him to hold the gun like he’s supposed to. It turns out that his right arm (the one that will hold the back end of the gun) is removable, something that should have been mentioned somewhere in the package but wasn’t. I’ve heard from a lot of folks who broke either Jayne’s hand or the gun as they tried to squeeze it all together. For shame, Quantum Mechanix! Once I knew to remove the arm, the gun went in easy-peasy. 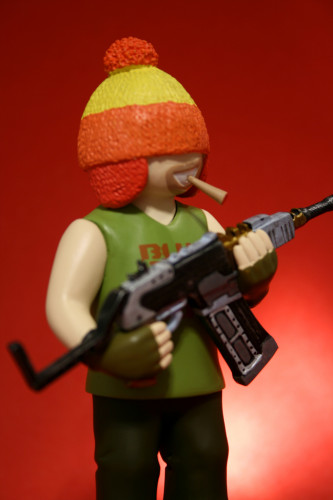 The cigar is another issue in itself. It fits into a hole in Jayne’s face, but it’s not secured in any way. A slight bump to the figure or shelf on which it’s display will dislodge the tiny cigar to bounce off into the realms of never-seen-again. I don’t know why they couldn’t have put a metal peg on the mouth end of the cigar to secure it, but no such peg is there. You just have to plug the cigar into the hole and hope for the best.

Assembly and design issues aside, this really is a cool little statue. The sculpting and paints look good, and he’s a fun addition to any Browncoat’s collection. The base is a plain black circle, as with the other LDH releases, and he displays well alongside his shipmates. My only reservation in recommending this guy is the riskiness of assembly and the shakiness of the final assembled piece. I just know he’s going to lose that cigar one of these days, which might help his lungs but not my collection.