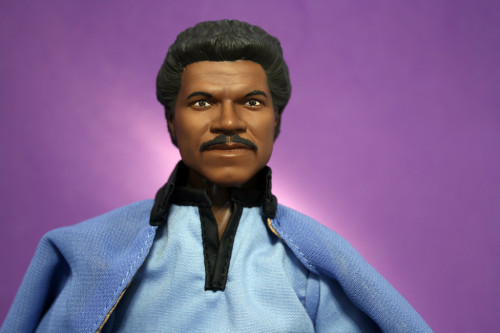 As technology and artistry progress in collectible and toy creation, the realism and accuracy of facial likenesses stuns me over and over. Most often Hot Toys is the company that surprises me with their eerily lifelike recreations of actors, actresses, and creatures, but this time it’s Sideshow. They’ve really knocked it out of the park with this Lando figure, and the face is uncannily and undeniably Billy Dee Williams. 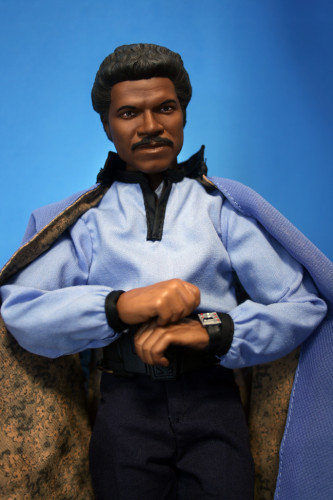 Lando uses Sideshow’s Prometheus body, giving him over thirty points of articulation. That means you can bend and twist him into just about any position you’d want, something I’m sure Chewbacca wanted to do quite a few times during The Empire Strikes Back. Sideshow presents Lando in his trademark Bespin outfit here, and the recreation is fantastic, from the ultra ’70s pants to the billowy-sleeved shirt down to the fantastic pointy-toed shoes. I think the feet on the Lando figure just might be my favorite feet in this Star Wars 1/6 scale series. 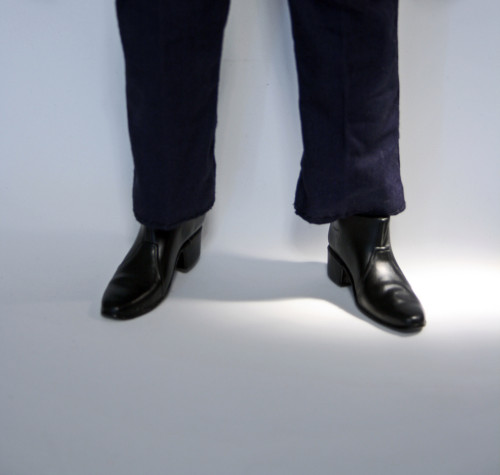 The accessories and other details included with Lando are all nice touches as well. He comes wearing his Lobot wrist controller, and his trademark cape is included in the package. The cape really looks nice and is detailed on the inside with a gold patterned design. It doesn’t have a clasp to attach around Lando’s neck. Rather, there’s a bendable wire in the collar of the cape. You can form that around his neck and shoulders to make the cape stay in place. Aesthetically, this is a very clever choice, because there aren’t any unsightly strings or clasps across his neck. Practically, it occasionally fails, though, as the bendy wire isn’t the most stable of support mechanisms. I’ve had the cape fall off a few times with a slight bump or tug. 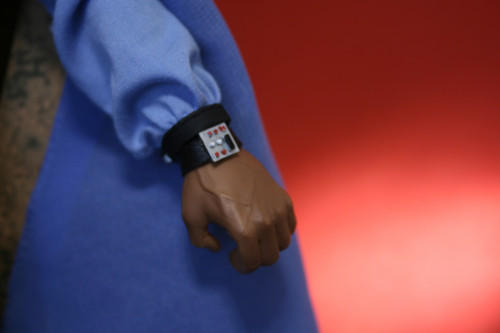 Along with the cape and wrist controller, you’ll also get an extra set of hands, as well as two different guns: one Imperial blaster and one Rebel blaster, suitable accessories for Lando’s shifting allegiances. The final inclusion is the Star Wars display base that comes with all the 12″ figures in this series from Sideshow.

From the convincing likeness to the outstanding costume design and engineering, this is a definitive Lando Calrissian collectible and belongs in any Star Wars fan’s collection.