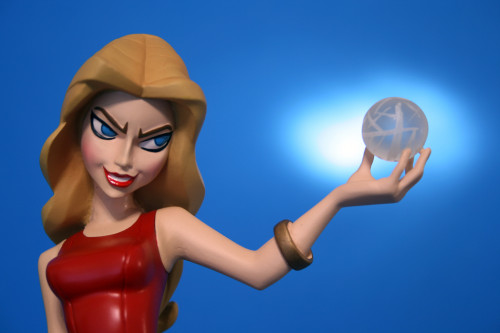 Before I begin this review, there are two facts that I must disclose to anyone who hasn’t been following my posts: First, I am a completely devoted fan of Buffy the Vampire Slayer and all things therein associated. Second, I absolutely love animated and cartoony versions of non-cartoon subjects. When Electric Tiki combined Buffy with their Tooned Up TV Maquettes line, it was like putting peanut butter into my jelly. It was just meant to be. So it’s with that admitted bias the size of Texas that I enter into this review of their newest release, Glorificus, also known as Glory.

Prior to Glory, the animated Buffy statue line consisted of four statues but just two characters. They’ve made two versions of Buffy herself, along with regular and evil Willow. I thought Glory was a really interesting addition to the line as the third character. She’s admittedly an awesome villain, but she isn’t what I’d call a top tier figure in the Buffyverse. Glory (played wickedly by Clare Kramer) poured evil into Sunnydale throughout season five of the TV series, but she otherwise didn’t really affect the story. It makes sense, then, that a character with lower popularity would have a more limited release, and Glory is limited to just 500 pieces worldwide. Somewhat ironically, this has made her probably the most sought after piece in the Buffy animated collection so far. 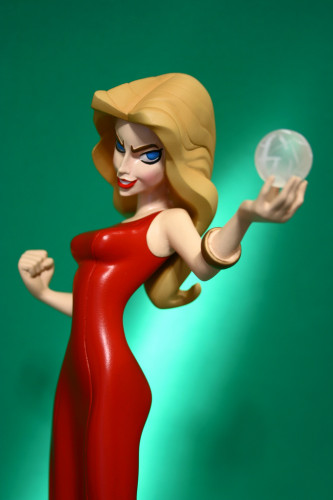 It’s obvious that the Electric Tiki folks are fans of the Buffy mythos, given the attention to detail in the statue design here. Glory is depicted in her trademark red dress and heels, just about to punch the crap out of the Dagon Sphere, clasped in her left hand. You see, (Buffynerd cap on) the Dagon Sphere is basically like Kryptonite to Glory, who is a hell goddess stranded on Earth (Buffynerd cap off… mostly). The Dagon Sphere itself is semi-translucent with some really cool magic-wavy details covering it. It’s immediately recognizable and a welcome nod to the show. Perhaps even cooler is that the base, which stylistically matches the Buffy and Willow bases, is smashed under Glory’s feet. On the TV show she brought down a whole building with a temper tantrum, and that’s what’s reflected in the faux-concrete on which this statue stands. 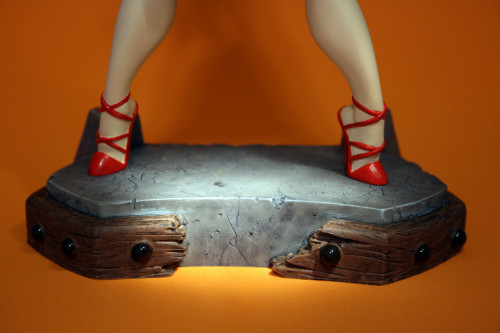 From head to toe, this is one great collectible, especially for die hard Buffy fans like me. The sculpt is true to the Electric Tiki cartoonish style and looks fantastic with this pose, while the paints are suitably flat throughout most of the piece with just a bit of shading on the face. The next character upcoming in the Buffy line is Faith, bringing the series back to the popular characters after this foray into lesser known ones. I’m definitely appreciative for this overt acknowledgment of the Buffy fanbase, and I highly recommend the Glory statue to any of my fellow Whedonites’s collections.