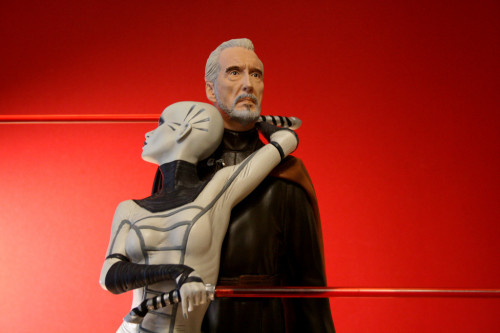 Gentle Giant has been very prolific with their Star Wars license, releasing loads of statues and busts based on scenes and characters from the movies and expanded universe. This time they really got creative, though, and produced this gorgeous piece based on art from a Star Wars Insider cover. Here’s my review of the Asajj Ventress and Count Dooku statue.

This is a pretty sizeable statue, coming in around 14″ tall, from the top of Dooku’s head to the bottom of the base. The sculpture is inspired by a piece of artwork that shows Asajj Ventress leaning on and draped seductively around Count Dooku, while he stares away resolutely. The art translates beautifully into this statue, and it’s one of the best 2D to 3D creations I’ve seen. I’ve never thought of Asajj as a particularly seductive character until now, but here she is sculpted with just the right amount of allure without losing her vicious scariness. Dooku obviously isn’t a seductive guy (sorry, Christopher Lee) and isn’t supposed to be here. He’s enduring Asajj’s affections but stands upright, his gaze on the horizon. It comes together into a very nice juxtaposition of emotion. 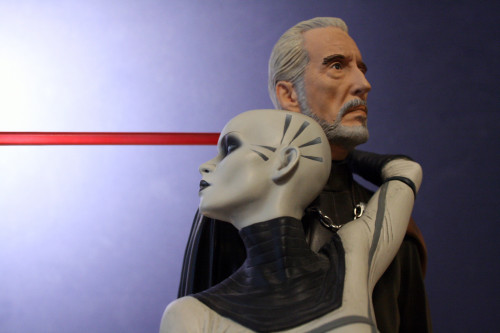 The statue ships in a big box that has the original artwork displayed on the back. I like that a lot, as it allowed me to compare the source to the final result, and I was very happy with how things turned out. Inside the box, the statue itself is packed into seven pieces: the round base, the Dooku figurine, the Asajj figurine, Asajj’s left arm, and three red lightsaber blades. It’s all fairly simple to assemble, and the only issue I had was that some of the protective tissue paper in the box stuck to the metal post on the attaching end of Asajj’s left arm. That made it difficult to slide the post into the hole on the Asajj figurine. I was able to remedy that by carefully scraping the stuck paper off with an Xacto knife, and it all ended up fitting together nicely. 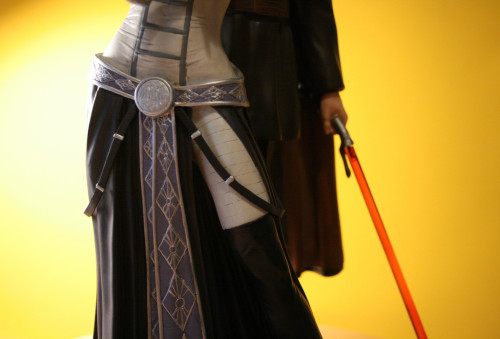 The Asajj sculpture is gorgeously detailed, and I have a new appreciation for the character and her costume. After looking at the statue, I picked up on details I’d never noticed before, like the two straps hanging down at her hips and the ornate decoration on her skirt. All the sculpting and paints are superb on her, and this just might be the definitive Asajj Ventress collectible. I think I’m even more impressed by this one that I was by the Sideshow premium format figure. 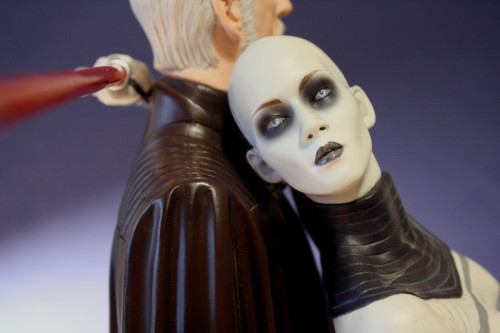 Count Dooku looks amazing as well. There have been a lot of collectibles that really have nailed Christopher Lee’s likeness, and this one continues the trend. He’s very recognizably Dooku, dressed in his usual black outfit with the brown cape. The cape clasp is made from a small metal chain affixed to the statue’s chest. The detailing is great overall, down to the ridges on his curved lightsaber hilt. The front of the Dooku statue is a little flat and smeared, for lack of a better word, to accommodate the Asajj piece, which stands directly in front of and almost against him. The undetailed portion of the Dooku statue is completely hidden by Asajj, so it’s not an issue at all. 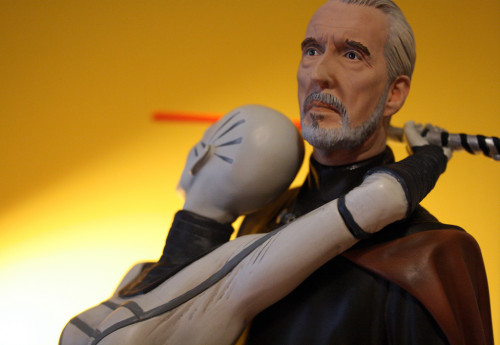 There are so many little things I love about this statue, from the expressiveness of the characters’ faces to the simplicity of the round, black base. One detail in particular that jumped out at me was the tapering of the lightsaber blades. Most or all of the other Star Wars statues I have that include lit lightsabers portray the blades with translucent rods that end in a blunted, round curve. This statue, however, shows the lightsaber blades as tapering to softly pointed ends, something that looks more accurate to how one would expect lightsabers to look, and something that lends an extra layer of polish to an already high-grade collectible.

The Asajj Ventress and Count Dooku statue gets a big thumbs up from me, and it has become a centerpiece for my Star Wars statue collection. 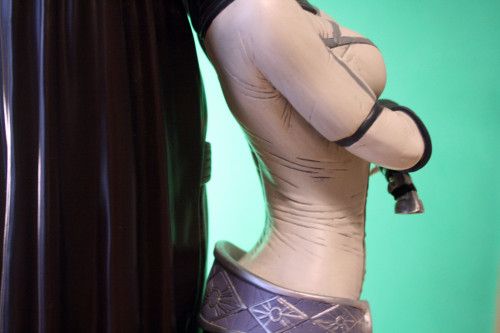 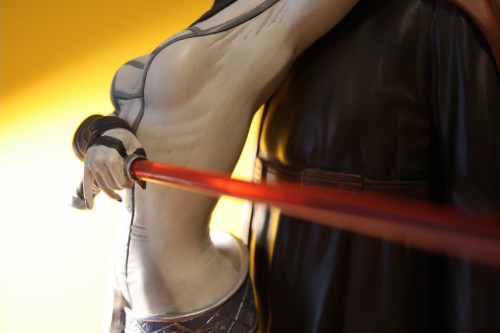 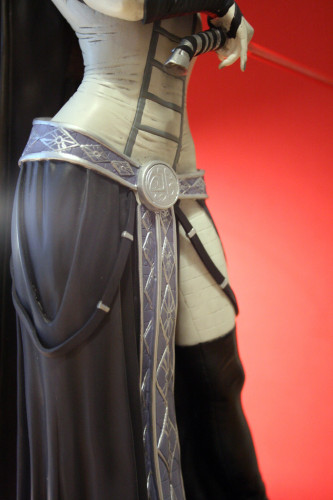 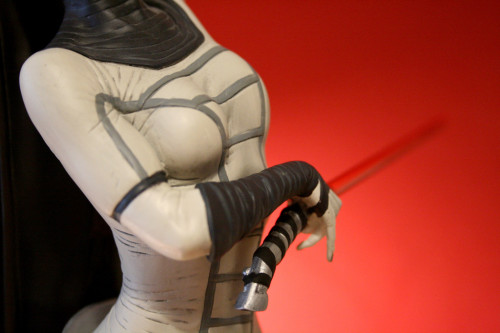 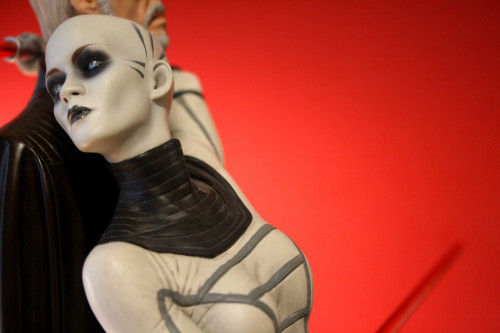 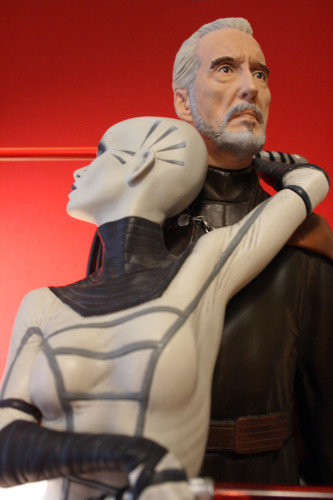 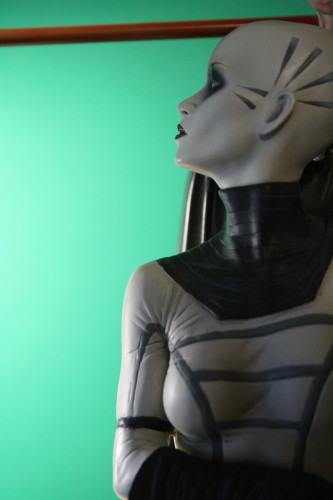 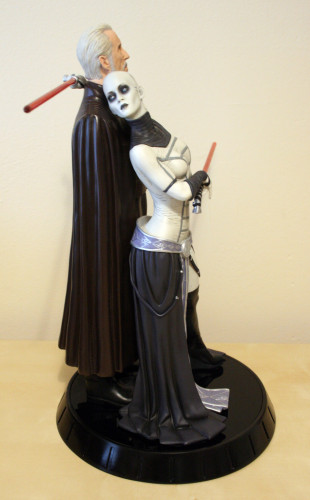 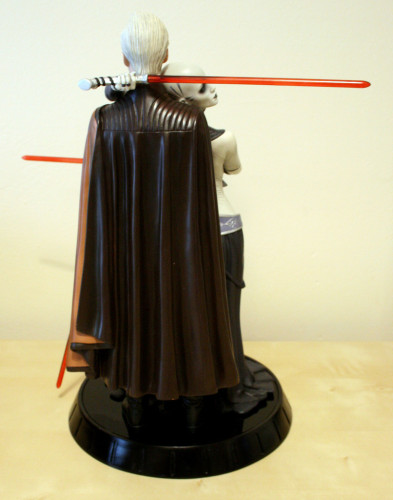 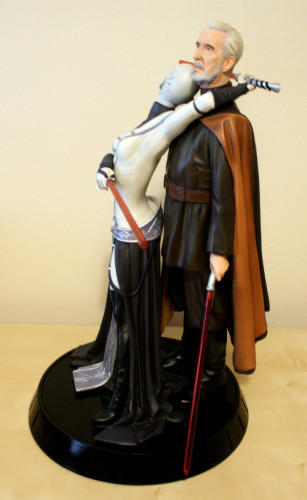 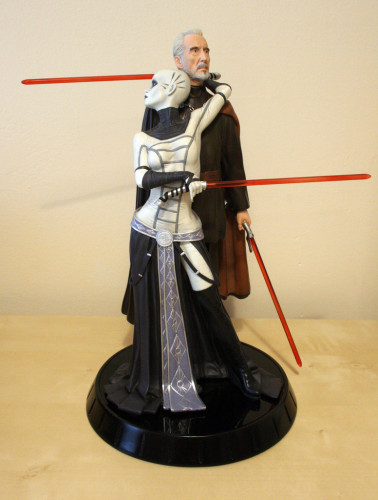