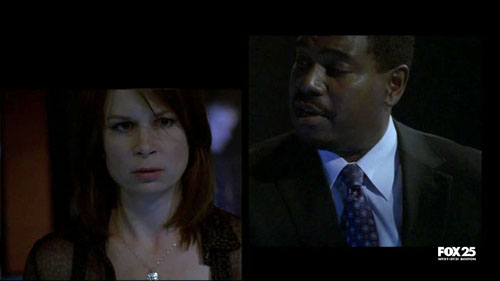 We left Season 8 only an hour ago in real time but an awful lot has happened since the EMP took out all of CTU’s systems.

No human injuries (dammit! I was hoping Dana would die a grisly death). Hastings wants Kayla to return to the UN building for evac with Ma & Pa Hassan, and also to ID terrorists working with Samir. Hastings tells her what a schmuck boyfriend Tarin is to have used her the way he did, and explains that Tarin is still alive.

Jack calls NSA and has all bridge and tunnel traffic into NYC shut down, leaving only one way for the terrorists to bring in the nuclear rods: by boat across the East River. Samir learns that CTU systems are down, and has the rods ready to go, when he gets a warning that a black SUV is approaching… Jack, Cole, and two tac teamers. Samir orders snipers to fire on the vehicle. Cole sees something that indicates trouble ahead, so Jack tries calling NSA again, to no avail, and he realizes comm is scrambled, and their butts will be dust. There’s some pretty fancy driving here, which almost makes up for the fact that Jack doesn’t even say “dammit” when he knows they’re under fire. Their tires are blown out, all four scramble from the SUV, using it for cover, backed by a wall. Snipers are firing, but so what? Jack’s there firing right back, with Cole alongside, plus those two other agents. 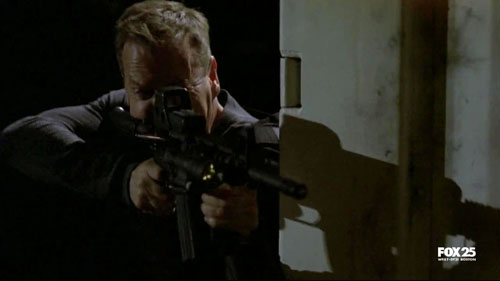 Samir doesn’t seem that worried, even though he knows of Jack’s rep as the country’s major badass, so he begins to take the boat carrying the rods across the river toward Manhattan. Jack knows he must call NYPD to block Samir, but can’t because the comms are jammed. He spies a red call box about 100 yards of open space from them, but there’s no way to get there without being blasted into next year. Like always in 24, he comes up with a great plan: disassemble the SUV they’re hiding behind and use the armored panels for cover, making it feasible for all four of them to snake slowly across the open space protected by bulletproof armor. Little does he know that the two young agents aren’t too good at following commands, but we’ll get to that in a minute.

Meanwhile, back at CTU as Hastings assesses the damage, NSA’s senior engineer, Haynam, gets there to get the system up and running again. He alerts Hastings that they’ve been unable to call Jack back due to scrambled comm, which vexes Chloe, who wants Hastings to send a rescue team for Jack. Hastings can’t spare any resources until the systems are back up. I’d hate to have a real Homeland Security guy like that. What Hastings does is send Chloe to help Haynam, but Haynam refuses to listen to her. This is intentionally irritating as hell because we all know Chloe is a genius and the other guy is no match in the brain department.

Chloe knows they can speed up the repairs by tapping into the trunk line, which Haynam thinks too dangerous. She begs, she pleads, she snarks, but gets nowhere. She calls Renee and fills her in on Jack’s situation, telling her she knows how to get the system back up but they won’t let her. Renee, who has lost that lost look, is suddenly like Jack in a bra. She says, “Do what you have to do, Chloe.” Chloe’s expression tells us that she’ll do just that because, well, it’s Jack who’s in trouble and needs her help. 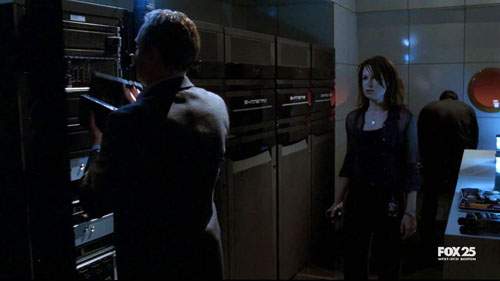 Dana the dipstick finds the parole guy, Prady, and informs him that the surveillance video (the one that would show her guiding Kevin and his pal during the NYPD warehouse robbery) has been melted in the system breakdown. Good luck in finding Kevin, she says. Prady, who never blinks no matter what, indicates he doubts what she’s saying because he knows she was involved. Each frustrated, they part company.

Meanwhile, Chloe tries one more time to get Haynam to tap into the trunk line and, again, he refuses. So Chloe pulls a gun and orders him and his men to get out of the room so she can work on getting the systems back up. Incredulous, they have no choice but to leave, and go running to Hastings whining about Chloe. Hastings has the server door drilled through, and confronts Chloe.

Haynam thinks the plan will fail so Hastings asks Dana, who agrees that it will fail. After all the times Chloe stood up for her, she betrays Chloe. Bitch. Chloe, however, won’t be dissuaded and reminds Hastings how well she’s done for CTU all day long. Hastings, for once, listens to her, and asks everyone to leave. Chloe fires up the tap… there’s a spark… and power is back up, with satellites coming back online. Chloe alerts Hastings that Renee is out looking for Jack. 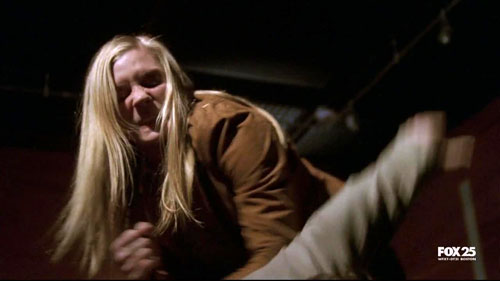 Prady had asked to see Hastings, but Dana went instead. Dana proceeds to Hulk out, kicking parole guy in the crotch and garroting him, just like Clemenza did to Carlo in The Godfather. At last we know where her brains are: in her muscles, not her head. She stuffs his body in the wall and phones… you guessed it… Samir! A mole!!! Maybe the dumbest mole in history, but still moleworthy. She promises to get Samir and the rods “out of there.”

Those two young agents who don’t listen to commands, even Jack’s, break the slow stride necessary to keep the bulletproof SUV walls as protection, and all hell breaks loose as they try to run for cover, unprotected. One gets shot but doesn’t die. Jack and Cole make it to cover with the other agent. The surviving agent tries to hero out, against Jack’s explicit orders to leave the first guy out there or he, too, will get killed. He goes out to get his buddy and gets plugged dragging him back. They both die, despite Jack’s CPR efforts. Jack is determined to run for that red call box. There he goes… running… running… will he make it? He has to make it. He’s Jack Bauer! OH NO, he gets shot and falls to the ground. Very tension-filled scene, to say the least.

The POV is Jack’s head in the sniper’s sights. The sniper is about to fire, when shots ring out, killing him. It’s Renee!!! 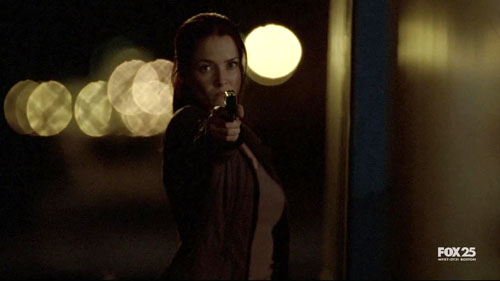 Time to stand up and scream Emmy for her! Emmy for her! She saved Jack! She and Cole then take out the rest of the snipers. Wow! This is 24 at its absolute most what-you-love-this-series for. Never mind that Jack has a collapsed lung. For him, that’s nothing.

At CTU, Hastings is briefed on the situation, and has Chloe tell NYPD to divert all units to the shore, laying down a cordon to stop Samir and the rods. He also takes a moment to say to Chloe: “Thanks. You were… ” but Chloe cuts him off, snarking, “I’m not good with praise.”

Unfortunately, Samir, Tarin, assorted villains and the rods are already in Manhattan; in fact, they’re in a taxi.

Tune in next week. I know I will.