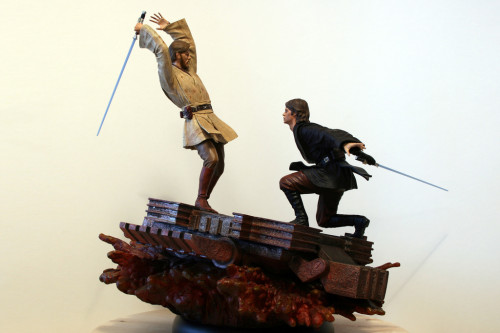 Today’s review is of a statue that has been out for a little while but that I haven’t covered before. I just noticed that Sideshow has it available again on a Second Chance offer, so it seemed like the perfect time to take a look at their first Star Wars diorama: Obi-Wan Kenobi Vs. Anakin Skywalker from Episode 3. If you’re a Star Wars fan and don’t already have this statue, I heartily recommend you rush over to Sideshow and place an order right now before the last of the 1250 sell out.

Based on the climactic battle in Revenge of the Sith, this is the very first piece in Sideshow’s ongoing Star Wars Diorama series. The other pieces announced and / or released so far are:

All of these statues are remarkably detailed and feature some really dynamic and exciting poses. I got the Yoda Vs. Dooku statue before I got the Anakin Vs. Obi-Wan one, and I was surprised with both by the scale of the pieces. From the top of Obi-Wan’s saber hilt to the bottom of the base, the Episode 3 statue measures a full 15 and a half inches.

The Obi-Wan Vs. Anakin diorama ships in five separate pieces: the huge display base, Anakin, Obi-Wan, Anakin’s right hand with saber attached, and Obi-Wan’s right hand with saber attached. Assembly is very easy. Anakin fits onto the base via a block and peg on the bottom of his foot, and Obi-Wan attaches by a similar metal peg on his foot. Obi-Wan’s saber-wielding hand plugs directly into his arm with a peg, and Anakin’s attaches with a magnetized peg that holds it stable, even at the descending angle the pose features.

The display base itself is a true work of art. It places the two figures on the metal slab they rode while dueling, and splashes of lava support the underside. The lava is painted in a convincingly fiery hue, and the platform has a fantastic rusty-metal finish to it. The detailing on the base is superb, with lots of defined edges. The platform is slightly tilted on the lava, which gives the statue an even more dynamic look. 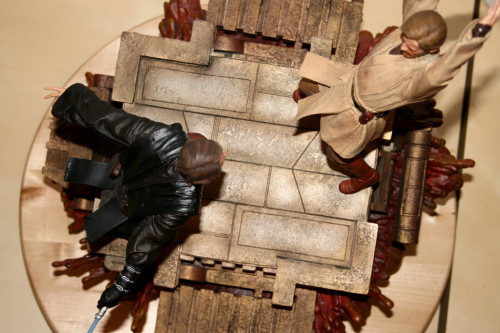 Anakin is the highlight of the piece for me. The likeness really captures Hayden Christensen, and the face sculpt is intense and expressive. The details on Anakin’s saber hand are very cool, and you can see all the straps and parts to the glove covering his robotic hand. 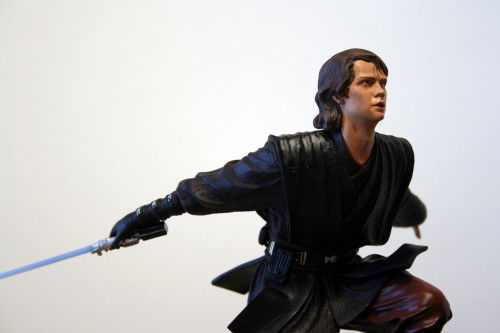 Obi-Wan is great as well, and the attention to detail on his outfit make the figure stand out. In addition to the usual faithfulness to the Jedi garb and belt, there are lots of scorch marks and burns over his clothes, singed from the ash on Mustafar. My only quibble with Obi-Wan is that he suffers from a little bit of crazy-eyes syndrome. If you look straight on into his face, you’ll see that he looks a lot more savage than I remember him being in the movie. Then again, I too might get a little wide eyed if I were in the midst of a laser sword battle on a teetering metal slab over a river of liquid magma.

I have no hesitation in recommending this statue. It looks great on its own and will be even better displayed with the rest of the series once they’re all released. Hurry to get it, though. The piece is limited to 1250, so there probably aren’t a lot left. The Obi-Wan Vs. Anakin Diorama sells for $279.99. 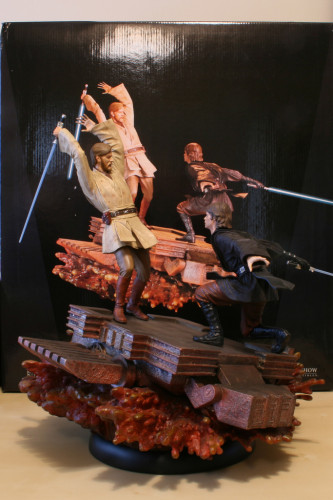 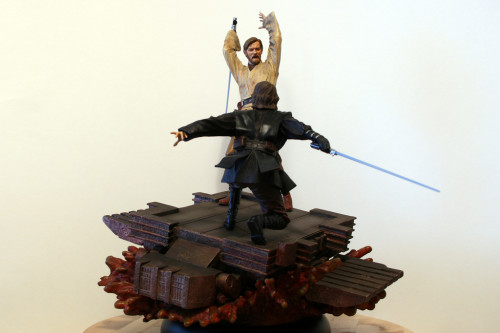 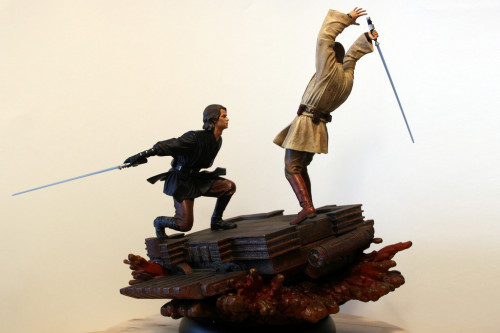 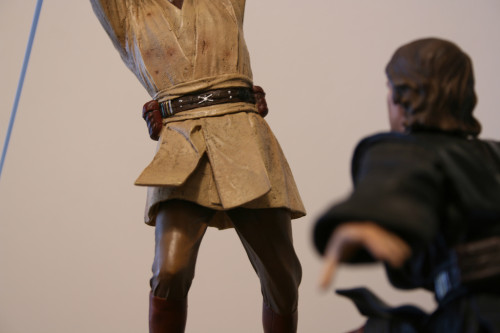 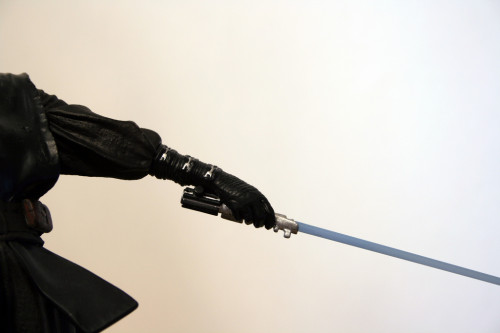 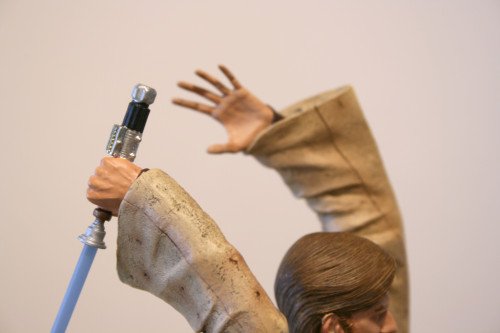 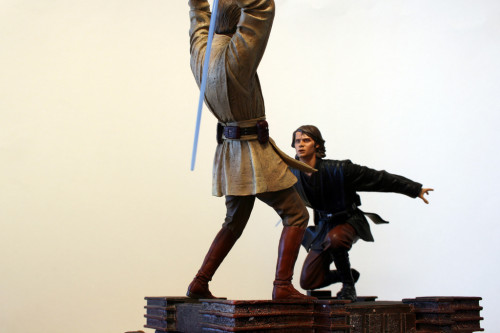 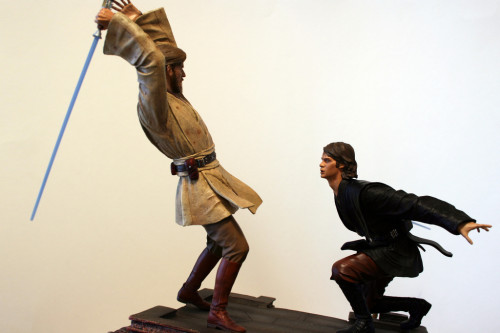 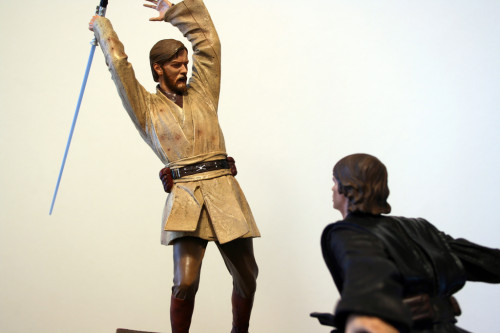 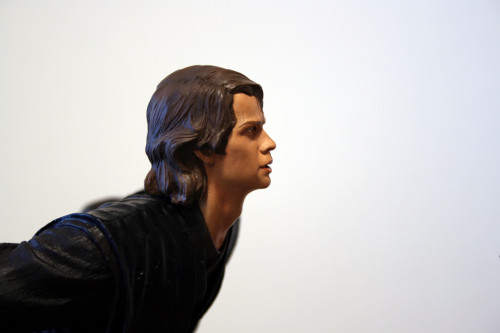 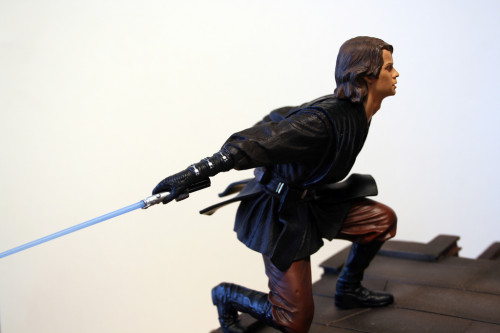 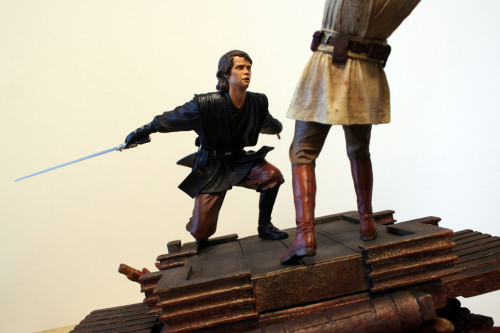 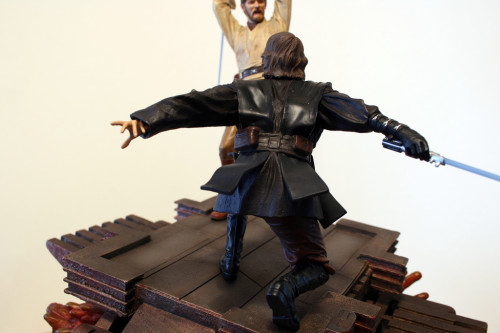 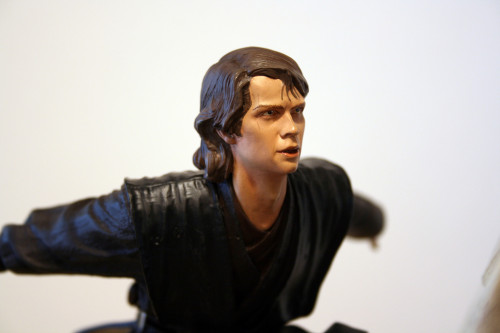 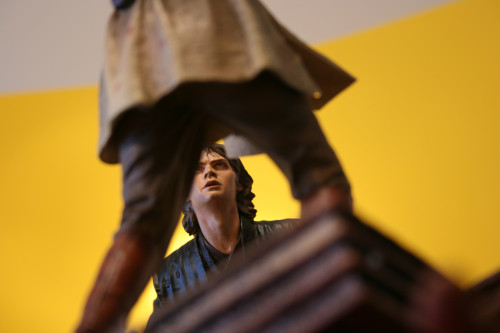 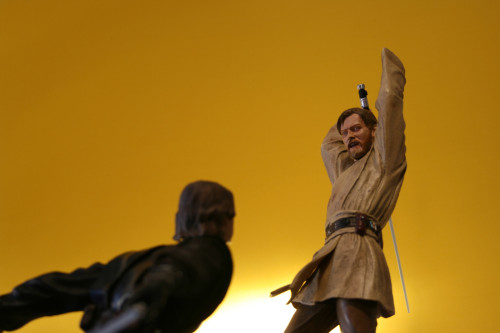 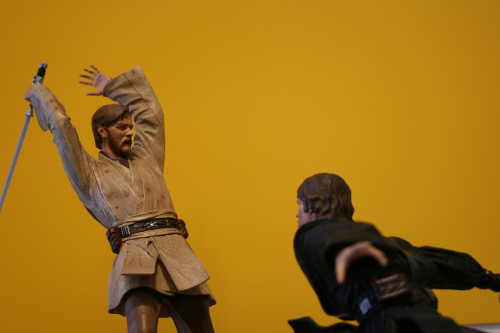 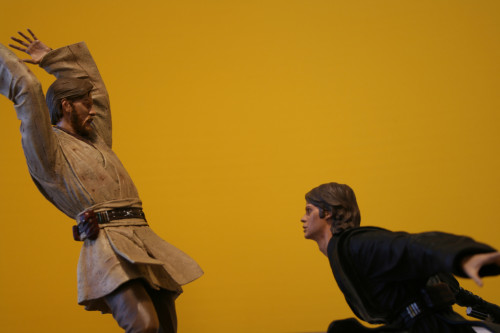 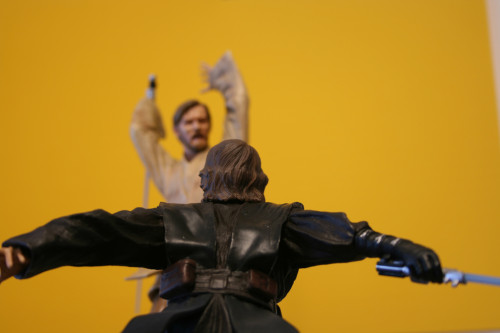 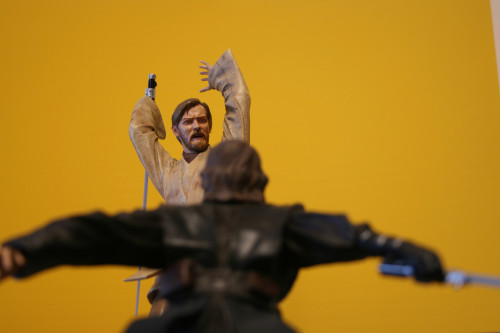 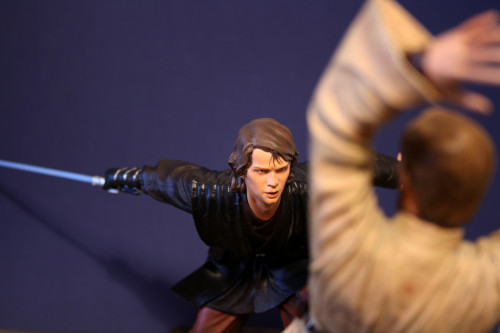 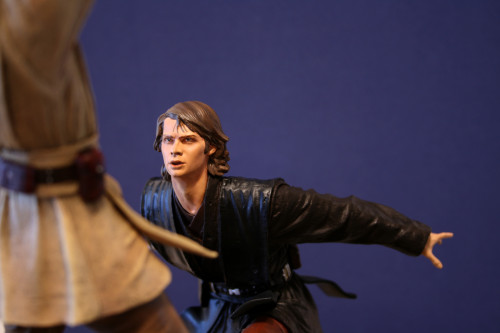 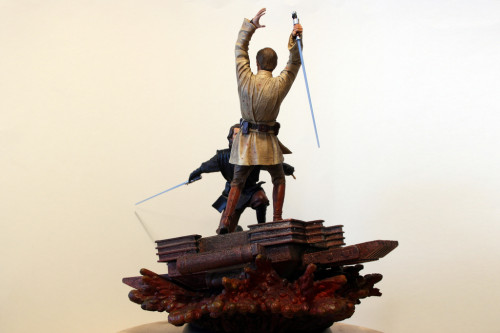