Sideshow Collectibles’ newest entry into their line of Star Wars premium format figures is Princess Leia in her slave outfit from Return of the Jedi. Here’s a closer look at this new collectible.

The Slave Leia premium format figure is a long-awaited piece that just started shipping from Sideshow this month. Sideshow’s premium format collectibles are 1:4 scale polystone figurines, usually clad in authentically styled fabric costumes. Characters ranging from Al Pacino as Scarface to Elvis Presley have been immortalized in this high-end format, and now it’s Carrie Fisher’s turn. This is actually the second time she’s shown up as a premium format statue, as Sideshow produced one based on Leia’s look in A New Hope a couple of years ago. 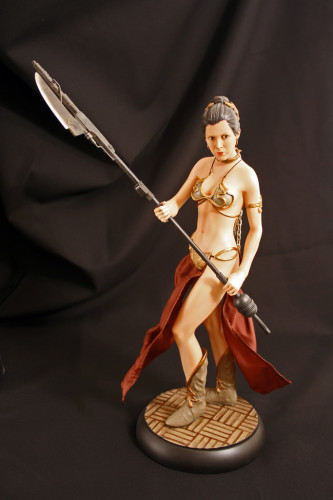 Sideshow offered the Slave Leia statue in two editions: a Sideshow exclusive version that was limited to 750 pieces, and a standard edition that was limited to 1250. The exclusive came with a special to-scale Salacious Crumb figurine to help complete the Jabba’s palace scene. I was able to get my hands on one of the standard versions, featured in these photos. The Leia figurine is the same in both versions, so this review only leaves out the added Salacious Crumb figure. 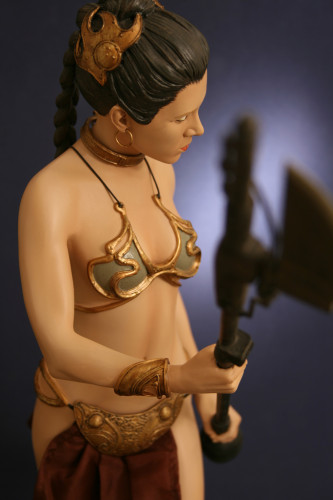 Cast from polystone, Leia stands around 16.5″ tall, a little short for a premium format figure, but definitely in scale, as Carrie Fisher is shorter than most of the people who have been featured in the line. She’s posed in mid-step with the lance weapon from the movie at the ready. The famous gold bikini is sculpted onto Leia, but the top straps are made from black string, and the red skirt is fabric. One neat touch with the skirt is that it has little wires sewn into the edges of the fabric, allowing you to bend and pose the skirt in nearly any position. 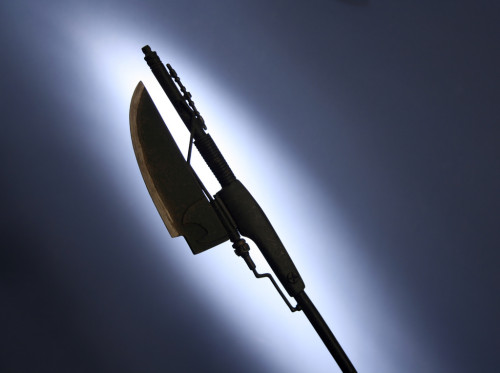 The choker around Leia’s neck is separate from the rest of the statue and can be rotated but not removed. There’s a metal chain attached to the choker that hangs freely. I was expecting for the chain to be a standard smooth-linked one, but it actually has some texturing on the metal itself, just one of the many cool details on this statue. 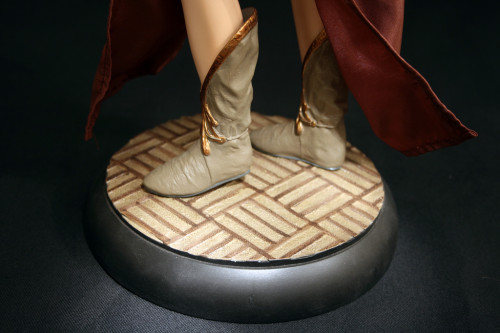 Leia’s face is sculpted in a determined and angry expression, different from Gentle Giant’s and Kotobukiya’s Slave Leia statues. The likeness is good, but it’s not quite as close as Gentle Giant’s. Her hair is sculpted on and not rooted, which is a good choice for this line. We’ve seen rooted hair on a premium format figure before (sadly, as part of the Elektra figurine), and most collectors agree that the sculpted route looks much better. 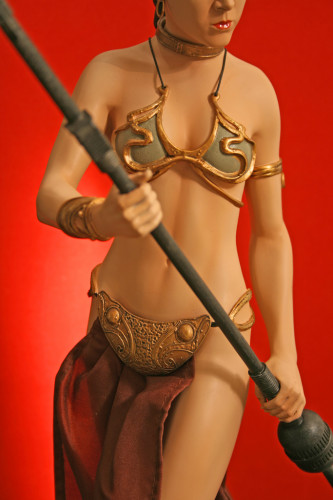 The Slave Leia premium format figure ships in three pieces inside the box: the main figure, the detached weapon head, and the separate base. The figure attaches to the base by a single peg in the bottom of one of Leia’s feet. Similarly, the weapon head attaches to the handle by a peg and hole. It’s all very easy to assemble, but I advise putting the base where you want it before you add the figure on. Once assembled, it’s not easy to move around in one piece. 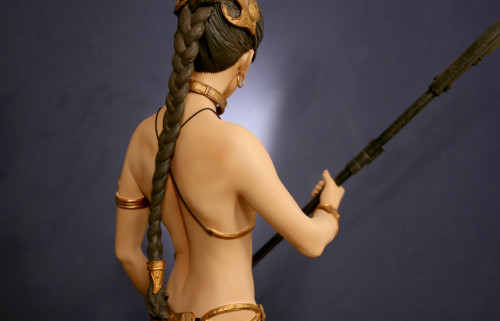 Both versions of the Slave Leia statue have been sold out from Sideshow for some time, but you still can get onto the wait lists in the hopes of grabbing one up when someone else cancels their order or has a credit card decline. 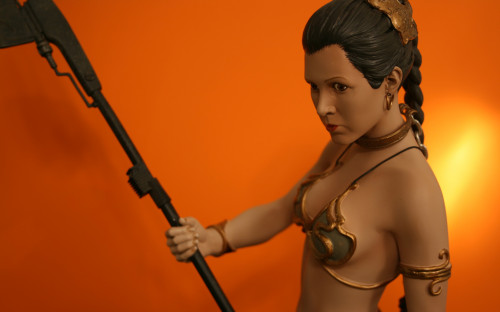 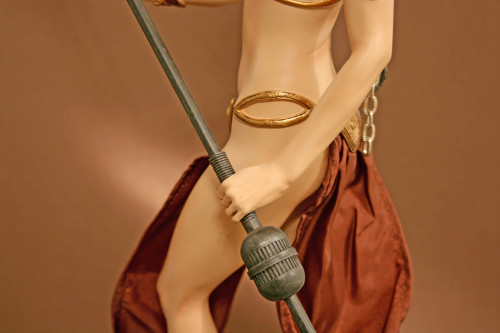 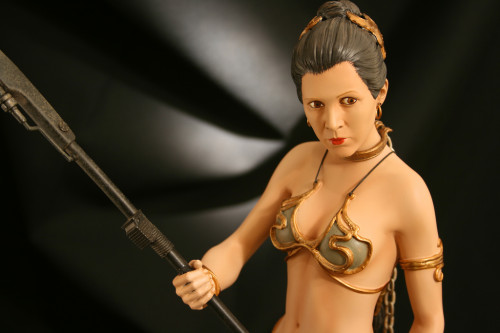 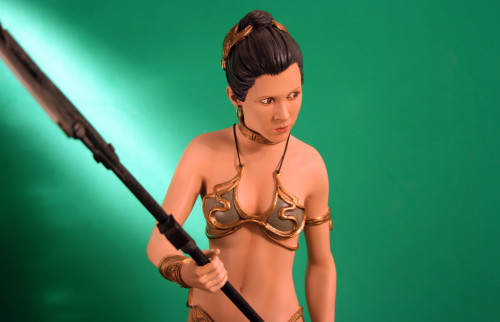 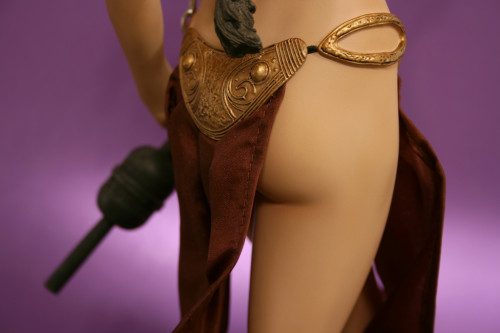 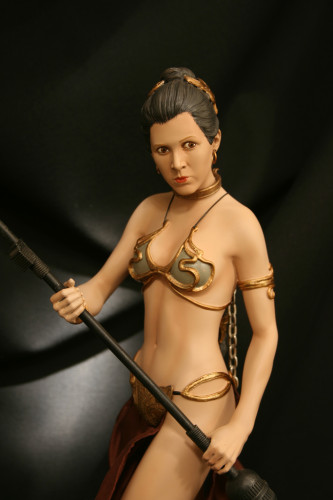 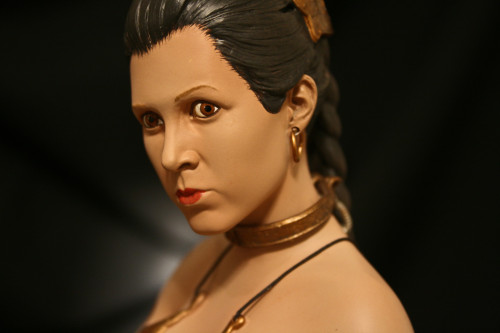 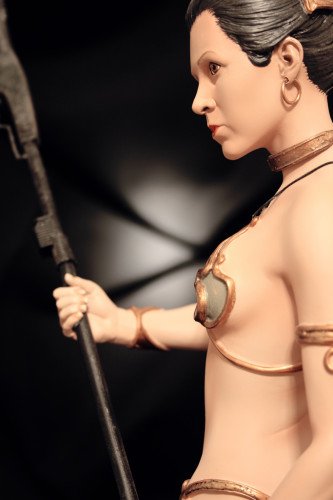 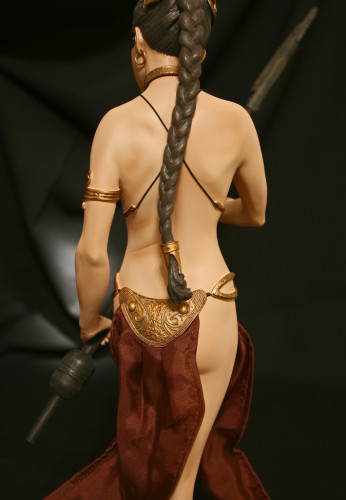 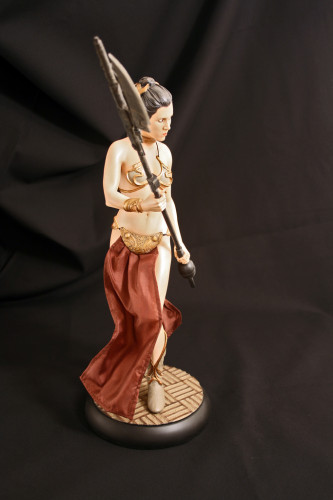 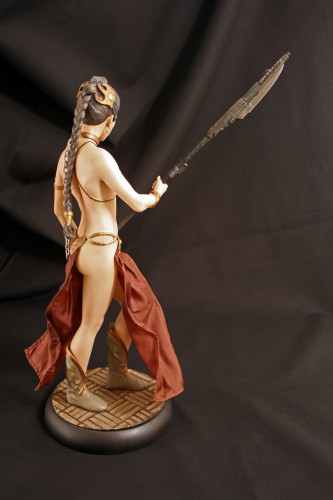 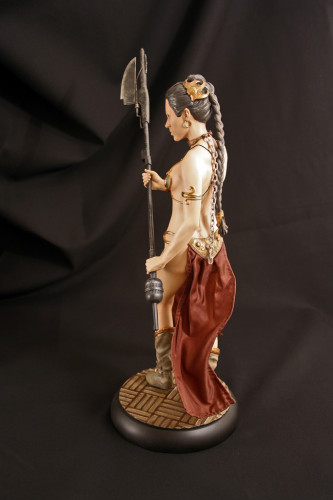