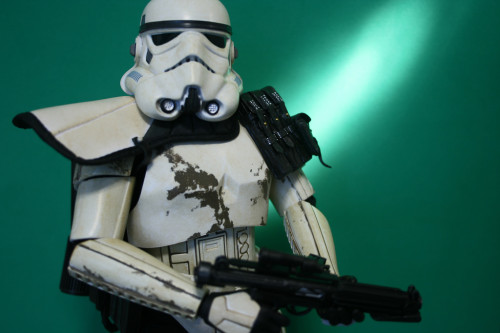 Sideshow Collectibles’ line of Star Wars 12″ figures is the most prolific and definitive 1/6 scale Star Wars figure line to date, and it shows no sign of slowing down. Once Sideshow designed and produced their Stormtrooper armor, we’ve been getting a steady stream of armored characters, from the Clone Wars version of Obi-Wan Kenobi to various flavors of the troopers themselves. Sideshow goes back to A New Hope for this newest trooper release, presenting their first Sandtrooper from the “Look sir, droids!” visit to Tatooine.

This inaugural Sandtrooper is a sergeant, designated by his white shoulder pauldron. The more popular squad leader Sandtrooper is also in the Sideshow pipeline, coming next year with his orange pauldron. The armor design for this guy is pretty much the same as for the standard Stormtroopers that were previously released. Unique to this one, however, is an overall brushing of brown and grey, giving the armor a weathered desert look. It’s a very nice touch that actually looks like dirt and sand caked onto the white armor. There’s also a bit of heavier grunge painted on. It looks good from a distance but is just a little too “painty” and not textured enough to be convincing when you examine it up close. Still, the overall look of weathered use is well done. 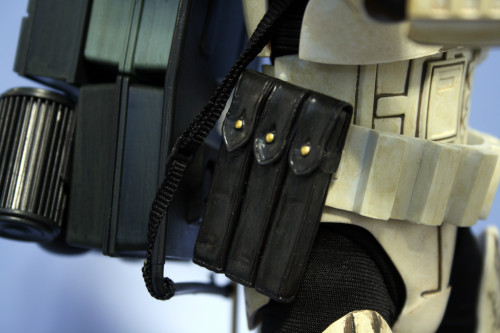 I’m used to seeing a nice assortment of accessories packed in with Sideshow’s 12″ figures, but there’s a ridiculous amount of stuff included with the Sandtrooper. In addition to the figure itself, the white pauldron is packed in separately. You also get a heavy duty backpack, a ginormous gun, a standard Imperial blaster, an extra pair of differently posed hands, the standard Star Wars display base that’s included with all of Sideshow’s 12″ Star Wars figures, and a couple of other pieces that elude my identification. I’m a super huge Star Wars fan from birth, but even I don’t know what all this stuff is. I’m sure the pieces I couldn’t identify (what looks like a little satellite dish on a stick and a second black rod) are somehow integral to the Sandtrooper’s design or accessorizing, but I haven’t a clue what they are or where they go. Still, it’s better to get too many accessories than not enough, right? 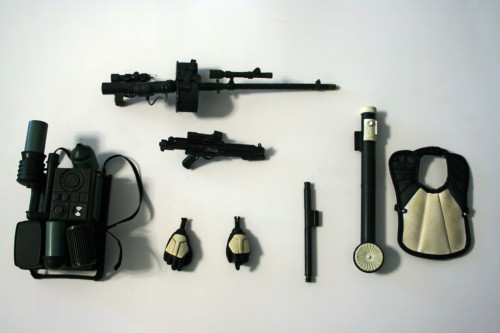 I had a little trouble in getting everything put together, so I wanted to include a word of caution here. In order to properly place the shoulder pauldron on your trooper, you’ll need to pop his head off (it’s removable, like many 12″ figures’ heads and limbs these days) and then slide the pauldron onto his arm, placing the neckhole around his neck peg before sticking the head back on. Doing it any other way will open you to the very real possibility of snapping the little cord that’s supposed to run under his arm, as I learned the hard way. I was able to do a simple repair on it, but it’s best to go into this knowing what you’re doing. The straps on the backpack are similarly fragile, so be careful when you’re suiting your guy up for battle. 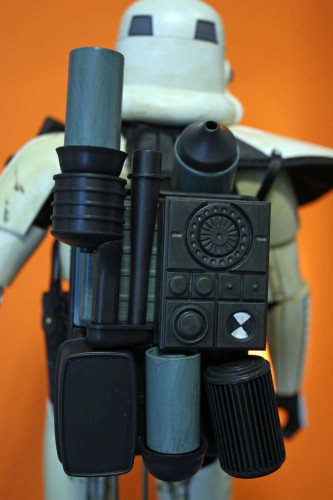 Until the Sandtrooper squad leader comes out next year, this is the definitive 12″ Sandtrooper and looks great displayed alongside the rest of the Imperials in Sideshow’s Star Wars line. I have no reservations in recommending this figure, especially to collectors wanting to fill out their troop ranks with a little variety.