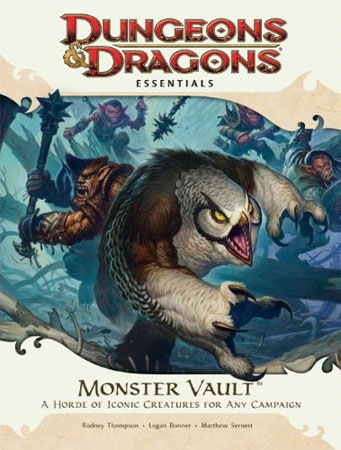 As a kid who grew up on a steady diet of Dungeons & Dragons books and accessories but without a real grasp on how to actually play the game, I remember my favorite book was the Monster Manual and then later the Monstrous Compendium. Fabulous and scary creatures and beasts are at the core of any good adventure, and the D&D monster guides delivered those in spades. Decades later, the newest incarnation of this fantastic release is here with the Monster Vault, the newest addition to the growing line of Dungeons & Dragons Essentials products.

The Monster Vault comes in a weighty box whose cover promises “a horde of iconic creatures for any campaign.” It becomes clear that Wizards of the Coast is serious about fulfilling that promise as soon as you lift the lid and dig into the contents. The first thing you’ll encounter is “Cairn of the Winter King,” a 32-page adventure booklet optimized for fourth level characters. A fold-up map accompanies the adventure, as do ten thick cardboard sheets, each containing a bunch of monster tokens you can punch out for use in the game. The adventure makes good use of a variety of the monsters and is ready to run right out of the box, provided you have a few characters of the appropriate level ready to go.

The real reason to pick up the Monster Vault, however, is the last thing you’ll come to in the box. It’s the main Monster Vault book, a chunky paperback styled to fit alongside the previous releases in the Essentials series. The 320-page book begins with an overview about how to use the book, how to read monster stats, and what various types of monster abilities mean and how to use them. After the introductory pages, the book launches into a big A-Z compendium of creatures that runs through the rest of the volume.

There are all manners of supernatural ghouls and critters here, ranging from Angels down to Zombies. Every monster type begins with a few paragraphs that introduce the flavor and nature of the creature being presented, followed by some general stats and abilities. The monster entries then delve deeper, showing different variations and specific types of each archetypal monster. For example, the section on Goblins begins with general information about the Goblin race and the species’s overall disposition and place in the world of Dungeons & Dragons. It then proceeds to describe no fewer than 11 different types of Goblins, including the Goblin Sniper, the Hobgoblin Beast Master, and the Bugbear Backstabber. Following the A-Z monster guide is an appendix focusing on non-monstrous animals. More mundane creatures appear here, including bears, horses, and even sharks.

As with all the Dungeons & Dragons Essentials releases, accessibility and ease of use are some of the most important aspects of this book, and its organization and clarity are fantastic. The sub-creature descriptions are well laid out within each section, and they generally begin with the weakest variant and proceed up to the most threatening. This least-to-greatest organization extends into the index as well, providing a list of monsters and their page numbers arranged in order of their threat levels and roles. It makes for easy and quick searching if a Dungeon Master is in need of an immediate threat for a specific group of adventurers, mid-adventure.

The Monster Vault is a welcome addition to the Dungeons & Dragons Essentials line and packs a lot of punch with its array of fiends and dragons to challenge players. It makes for fun reading for anyone interested in fantasy creatures and is a truly essential guide for anyone running a D&D campaign.