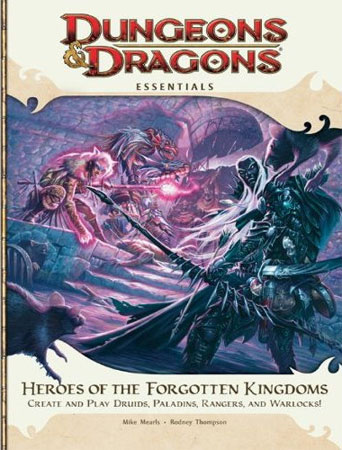 If you’ve been following my recent Dungeons & Dragons coverage, you’ll already know I’m a big fan of the new D&D Essentials rulebook series. The last release was Heroes of the Fallen Lands, a guidebook to half the races and classes in the game. Now Wizards of the Coast is back with the companion book, Heroes of the Forgotten Kingdoms, detailing the second half of the character creation options.

Like the other books in the Essentials series, this one starts with an introduction first to roleplaying in general and then to the specific rules of Dungeons & Dragons. It’s a good bet that anyone reading either of the Heroes books also will have read the Rules Compendium, but it’s still useful to have the basics included at the start of each Essentials volume. These first few chapters serve as a good refresher course in how to play D&D, and they cover basic concepts like skill checks and combat in order to get readers ready for the deeper topics addressed by the later chapters. The introductory sections conclude with two chapters on character creation and understanding power before moving into the meat of the book: classes and races.

Heroes of the Forgotten Kingdoms covers the four main character classes that Heroes of the Fallen Lands didn’t touch: Druids, Paladins, Rangers, and Warlocks. The organization and layout of the class chapters match those of the Fallen Lands book. Each class chapter begins with a general overview of the chapter, as well as a ground up description of what players can expect from playing in that class. After going over the general traits for the class, the chapter moves on to specialty builds with instructions on how to generate ability scores, suggestions on complementary races, and even a rundown of equipment common to that archetype. There’s at least one specialty build within each class, and some have two. This section of the book will show you how to make a Hexblade out of your Warlock, how to develop your Druid into a Sentinel, and the difference between a Ranger Hunter and a Ranger Scout.

Following the chapters on classes, there is a smaller section that details six playable races that were not covered in the Fallen Lands book. Each race discussed here has details about racial benefits, suggested classes, and even tips on roleplaying effectively. The six races described in Heroes of the Forgotten Kingdoms are the Dragonborn, Drow, Half-Elf, Half-Orc, Human, and Tiefling.

The last section in the book is a set of three chapters covering skills, feats, and equipment. The skills chapter is identical to the one in Fallen Lands and expands upon the skill rules outlined at the beginning of the book. The chapters on feats and equipment do have some differences from their sibling chapters in the previous volumes, but they largely are the same as before, down to the same tables and illustrations. It’s all great and necessary information, but if you’ve read these sections in one book, it’s a safe bet that you can skip them in the other.

The Heroes books truly are essential reading for players who are putting together new characters and need some insight into the paths they’ve chosen. The depth and variety of information included about each type of character concept, as well as the clarity and organization of all this material, makes both volumes key reads even for seasoned players. Not even the most devoted D&D player will have a firm grasp on every race and class combination, and the Heroes books come to the rescue for nearly any character build.