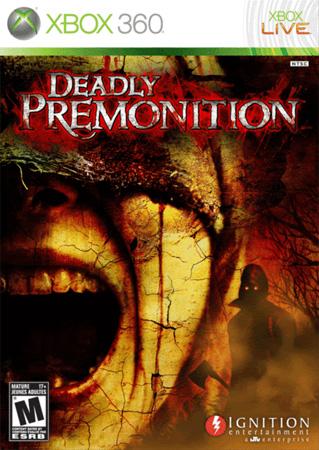 Ignition’s new survival horror game, Deadly Premonition, arrived last week, and it’s taken me this long to figure out how to review it. Leading up to the game’s release, all the text promotion touted the game as a tense survival horror about brutal murders in a small town. The trailers, however, painted a stranger game with dated graphics and oddly perky music. Between the promises of danger and horror and the visual indications of a trainwreck of a game, I really didn’t know what I was getting into. And, to be honest, it took me a couple of hours of actually playing to realize that Deadly Premonition is not merely a survival horror game. Rather, it’s a brilliantly made spoof of the survival horror genre. Admittedly, I’m not sure whether the spoof is intentional, but it works so perfectly that I hate to imagine that the game is supposed to be taken seriously. 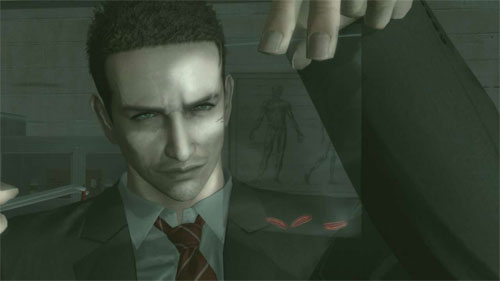 You’ll step into the loafers of FBI agent and all-around weirdo Francis “call me York” Morgan, dispatched to the small town of Greenvale to investigate the latest in a series of murders. From the very beginning you’ll realize there’s something “off” about this game when Morgan (I refuse to call him York, even if “everybody else does”) carries on a conversation with his imaginary friend Zach before flipping his car into the zombie-infested woods outside Greenvale in the most bizarrely unnecessary single car collision I’ve ever seen. He then has to fight his way into town on foot but never thinks to mention his encounter with monsters to the cops he meets upon arrival. 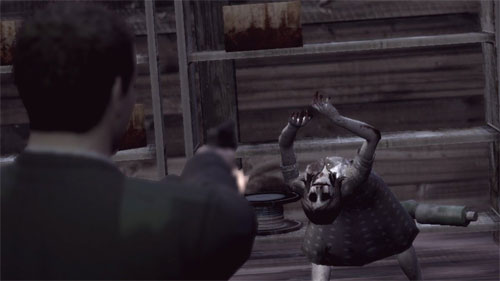 The monsters themselves are pretty much your garden-variety zombies with a few neat twists. Rather than just shamble or run at you, they move jerkily in a fashion reminiscent of Ju On (aka The Grudge, for the more Gellar-prone) and Ringu (or The Ring, for those who don’t like the letter “u”). They also do some killer backbends and scuttle around backwards, movements that are probably the most unsettling and horrifying things about this game. They also have some interesting-bordering-on-amusing moans they like to belch out, either before or after Morgan has shot them in the head. Oh, and he always congratulates himself (or Zach?) on the marksmanship with a “Good shot!” The creatures’ arrivals reminded me a lot of the Silent Hill series. Whenever they’re around, everything transforms into a nightmare version of the actual town. There’s even a frequently looming bad guy who drags his weapon around, à la Pyramid Head.

You spend a decent portion of the game roaming around corridors and shooting these things whenever they clamber out of oil slicks on the ground. The combat segments serve to break up the investigation portions, which actually are the best parts of Deadly Premonition. Investigation involves traveling around town to interview suspects and searching crime scenes for clues. Meeting the denizens of Greenvale is always a rewarding task since every suspect is crazier than the last, and nearly all their dialogue is so terribly written and delivered that it had me chuckling throughout, with the occasional incredulous guffaw. Take, for example, Harry Stewart, an absolute freak of a dude, who rides around in a wheelchair and wears a gas mask all the time. He whispers his dialogue to his assistant, Michael, who then delivers the messages in rhyming couplets. I’m not even kidding, and that’s only scratching the surface. 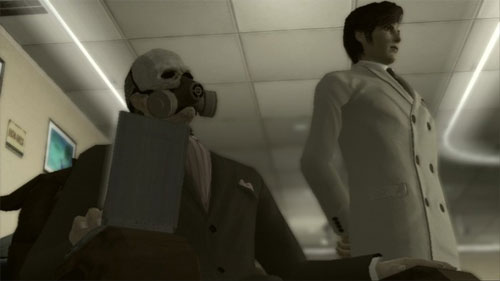 The crime scene investigations give you a number of clues you’ll need to find before progressing to the next area. Clues are generally easy to find, as they’ll be highlighted with red sparkles. You’ll just have to walk over to them and hit a button in order to add them to your casefile. Once you’ve assembled the broken stiletto heel (which you happened to find in a bird’s nest), the bent blade of grass, and all the rest of your seemingly random junk, Morgan will manage to assemble the entire sequence of events that occurred in what amounts to a psychic vision. It looks a little like Frank Black’s intuitive flashes on Millennium, only with way bigger leaps in logic and detection.

So that’s how you progress through the investigation, rambling from crime scene and zombie bog to crime scene and zombie hospital via interminably long car driving sequences. It takes forever to drive from one side of town to the other, and it seems like you’re traversing nearly all of Greenvale every time you have to go to a new scene. There are a lot of time eaters in this game, from the driving to the game-pausing screens that pop up whenever you pick up anything to the slow door-opening animations whenever you enter a new room. That last one feels a lot like the first Resident Evil‘s door sequences, and I’m not entirely convinced this one’s not a subtle homage. If it’s not, it should be. The menu system is a crazy mess that eats time as well. When you enter the menus, you’re greeted with a strange ramshackle room in the midst of a woodland scene, complete with a moving deer head mounted on a broken down wall. Navigating the menus is a multilayered and confusing task that you have to deal with any time you want to use a health pack or consult your map. 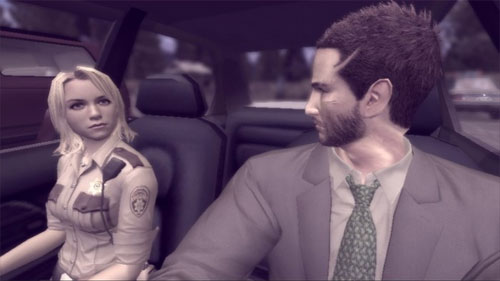 The controls handle decently, and they feel a lot like they do in pretty much any other survival horror you’ll encounter. Something that distinguishes Deadly Premonition from others in the genre is the odd level of detail involved, combined with some random minigames. Morgan’s beard will grow if you don’t make him shave, his suits will get dirty if you don’t clean or change them, and you can occasionally take him fishing or for a rousing drag race. And speaking of driving again, your car actually requires and uses gas. You’ll have to stop periodically to fill up the tank at the gas station.

As previously mentioned, the graphics are unquestionably dated. They honestly make the game look like it’s an early Playstation 2 release, but I think that makes the parody work extremely well. When Morgan is waving his jaggedly polygonal hands around, you’ll swear you’re playing a game from seven or eight years ago, exactly the horror gaming era Deadly Premonition spoofs. More obnoxious (and endearing) than the graphics is the insane music. There are maybe four songs that play throughout the game, and there’s no rhyme or reason to when or why they will play. In the morgue examining a corpse? What a perfect time for jaunty guitar folk music! Discussing the grisly details of a mutilation with the town sheriff? Perfect for some Skinemax saxophone jazz. The game’s score is outstandingly wrong and all the more perfect for its wrongness. 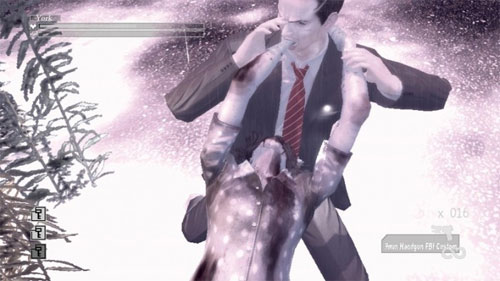 I could go on and on about the crazy red tentacles that pop up to block doors, the fact that a blow from a lead pipe does more damage than five shots from your FBI pistol, or the loony gas station attendant who spits on your car, but these and all the rest of the game’s gems really deserve being discovered on their own. If you’re looking for a hardcore and suspenseful murder mystery, look elsewhere (might I suggest Heavy Rain?). If you’re a longtime fan of the survival horror genre, however, and are ready for the mother of all “so bad it’s good” games, you owe it to yourself to check Deadly Premonition out. It’s priced to move at $19.99 and offers at least 20 hours of hilarious insanity with Agent Morgan and his invisible friend.