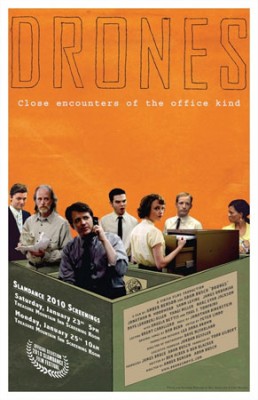 Back in August of last year, Buffy the Vampire Slayer alums and creative couple in their own right Amber Benson and Adam Busch joined us on the Fandomania Podcast to talk about what they currently were up to. Chief among their projects was an indie movie they were directing called Drones. Last weekend Amber and actor Samm Levine brought Drones to the Florida Film Festival, and we finally got to see what they’ve been working on, as well as chat with Amber again.

As a longtime fan of the Joss Whedonverse, I’m used to seeing the same talented folks come together in different configurations throughout Joss’s various works. It’s just as awesome, if not moreso, to see those people growing the connections they made via Buffy and its neighboring productions to make their own projects. Such is the case with Drones, an office comedy directed by Amber Benson (Tara from Buffy) and Adam Busch (Warren from Buffy) and starring Jonathan M. Woodward (various characters on Buffy, Angel, and Firefly). Lest you think the whole movie is scavenged from Joss Whedon’s coffers, we also get to see Angela Bettis (May; Girl, Interrupted) go comedic, Samm Levine (Inglourious Basterds; Freaks and Geeks) as a good-natured interloper, and James Urbaniak (The Venture Brothers) as the boss of the whole thing. (Urbaniak also told us a bit about Drones when Paige MacGregor interviewed him for Fandomania back in November.) 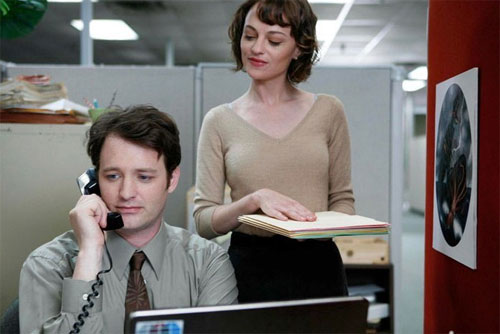 Part romantic comedy, part science fiction, Drones follows OmniLink office employee Brian Dilks (Woodward) through the most bizarre week of his life after he discovers that at least one of his office mates might be an extraterrestrial. Jonathan Woodward’s performance is reminiscent of vintage Bill Murray, and that alone makes this a movie worth seeing. That’s not to take away from the rest of the cast, though, as every other performance comes together beautifully. There really is a huge amount of comedy talent here, especially given the independent nature of the film and the speed with which it all came together.

After the screening, Amber Benson described the production process as a very quick turnaround. An office became available for shooting, and the writing team of Ben Acker and Ben Blacker (of The Thrilling Adventure and Supernatural Suspense Hour) turned out the script in just a few days. The movie began shooting very shortly thereafter, and Angela Bettis had only one day between being cast and showing up on the set. The end result is a crazy, funny, and even poignant look at working in the fishbowl of an office and finding one’s place in the galaxy. 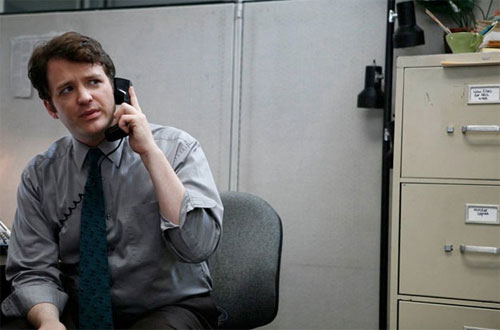 According to Amber, she and co-director Adam Busch have considered going for a wide Internet audience via web distribution similar to that of Dr. Horrible’s Sing-Along Blog, but they currently are fielding at least a couple of more traditional distribution offers. However Drones ends up being made available, this is one indie movie you really need to see. All the folks involved with the production are passionate about their art and the movie, and I’m personally hoping this little film grows its fanbase as word of mouth increases. As Amber told us, they made this not for the money but for the chance to get as many people as possible to see it through any means: “We want to spread the Drones.”

For more information about Drones and where you can see it, check out the official website: DronesMovie.com