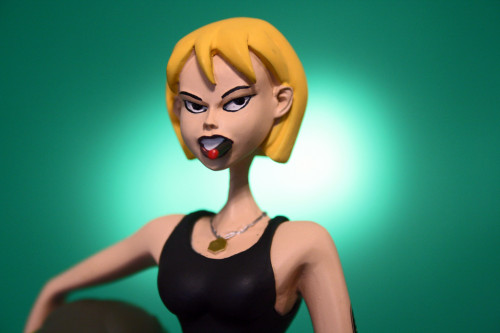 Quantum Mechanix has been making a name for themselves as a relatively new collectibles manufacturer that’s been hitting a lot of sci-fi fans where it counts with releases from the likes of Stargate, Battlestar Galactica, and Firefly. One of their best known lines is the Little Damn Heroes series of mini-maquettes featuring the characters from Firefly and Serenity. I previously reviewed their Kaylee and Jayne figurines, and now I’m taking a look at their newest live action to animated style translation, the Starbuck statue from their brand new Battlestar Galactica line.

QmX is releasing their Battlestar Galactica animated statues under a couple of different banners: Little Frakkin’ Colonials (featuring the humans from the series) and Little Frakkin’ Toasters (featuring the Cylons). Kara “Starbuck” Thrace is the first Colonial in the line, an appropriate pick as one of the most popular characters on the TV show. The pose and figure design are suitably Starbuck, from the cigar chomped in her mouth to the VIPER helmet under her right arm to the gun in her left hand. There are some very nice details included, such as Kara’s hexagonal dogtags and her Caprican “wing” tattoo on her left arm. 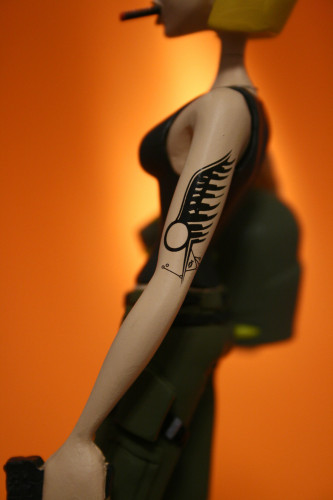 The figurine and base come as two separate pieces, and they’re easy to connect via pegs and holes. The base is a plain black circular one with a mirrored top. It looks nice on display, but I was hoping for a more Battlestar-themed base after seeing the awesome Stargate base that was included with Quantum Mechanix’s recent Teal’c statue. 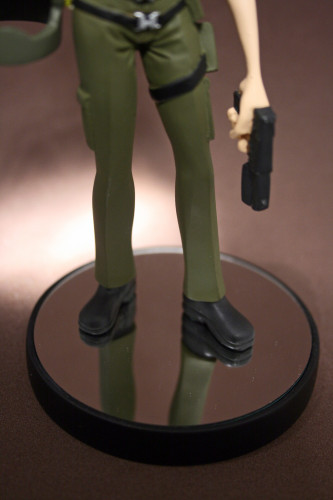 As cool as the design and concept of the figurine are (not to mention the fact that there’s an animated style line of Battlestar Galactica collectibles to begin with), this figurine takes some big hits in the production department. Some of the edges in the molded figure are bumpy, there’s an overall uneven feel to the sculpt’s texture, and upon close inspection it just sort of looks cheap. Not to mention that my statue arrived with a crack in the neck. This Starbuck’s noggin sits atop a very spindly neck, so I anticipate lots of broken off heads in these. If you can get past the quality of molding, the paints leave something to be desired as well. Some areas, such as the tattoo, look awesome and really are tight and accurate. Others, such as, sadly, Starbuck’s head and face, suffer from areas of imprecise painting, overpainting (“painting outside the lines”), and general unevenness. 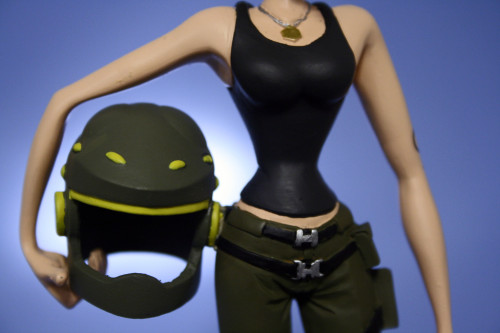 It really is a shame that production values would bring down what otherwise would have been a really fantastic collectible. I’m used to seeing high-quality pieces from the likes of Sideshow Collectibles, Bowen Designs, and DC Direct, and this Starbuck pales in comparison. I know some will say that I shouldn’t be comparing relative newcomer QmX to these big daddy companies, but I think it’s a perfectly valid comparison. Sideshow is even distributing this very statue, so I think it’s not unreasonable to expect the production values to measure up. It’s doubly frustrating, because I know QmX can and does make awesome pieces, like the aforementioned Little Damn Heroes and the Teal’c animated statue. 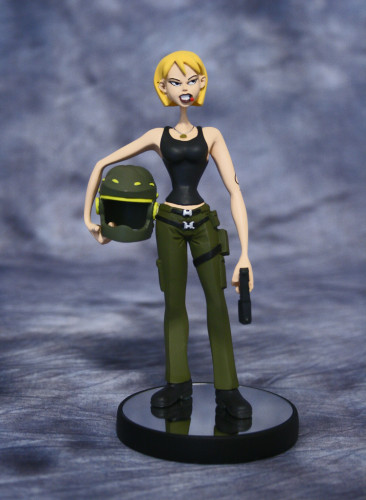 Poor production aside, the Starbuck statue still has a very cool style and design and will look just fine on your shelf, as long as you don’t put her under too much scrutiny (and as long as her head doesn’t fall off). She stands around 6″ tall on her base and is limited to 1000 pieces.