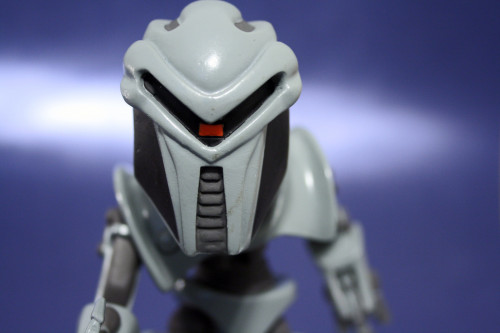 A couple of days ago I reviewed the Little Frakkin’ Colonials Starbuck maquette from Quantum Mechanix’s new Battlestar Galactica line. Today I’m taking a look at the first bad guy in the series, the Little Frakkin’ Toasters Cylon Centurion, and seeing whether he overcomes some of the problems the Starbuck figurine has.

I’ll keep the suspense short on this one… The Cylon Centurion is a great little animated style statue, and it’s far better produced than the Starbuck piece. The lumpy molding, hairline cracks, and sloppy paints that plague Starbuck aren’t present in this one, thankfully. There still are some inconsistent spots and areas that aren’t as refined as I’d like, but the overall collectible looks like a professionally produced statue, and it definitely meets my expectations. 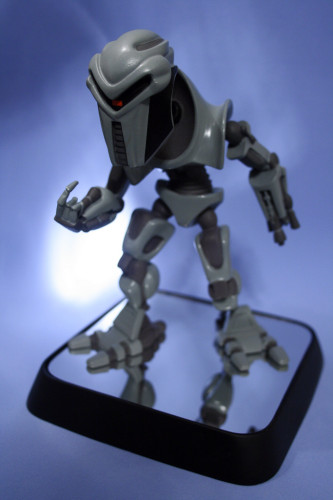 The Centurion stands in a challenging pose, its left arm in gun mode and its right hand beckoning “come hither” to some unlucky Colonial meatbag who’s undoubtedly about to see his or her own insides. On the TV show, the Centurions are tall, thin, and fast chrome killing machines. The animated style treatment has squashed the design down into a more compact and stubbier representation. I think the robot loses a little of its essence in this pudgification, but it retains the basic design elements and still looks capable of producing some cartoon carnage. 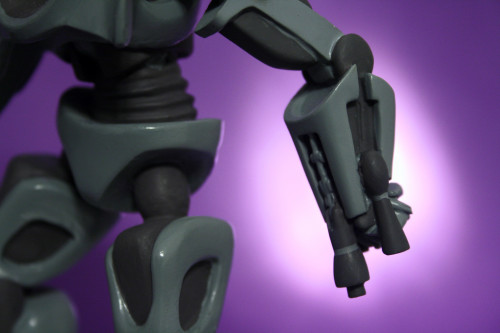 The Starbuck maquette came with a black circular base with a mirrored surface. The Cylon’s base matches hers with the mirrored top, but it’s a square base instead of a round one. As with the Starbuck statue, I really wish QmX had gone with a more Battlestar Galactica-specific design for the bases on these. Having the Galactica seal would have been a perfect choice. The mirrored bases to look nice on display, but they just lack the character that they could have with a little more design. 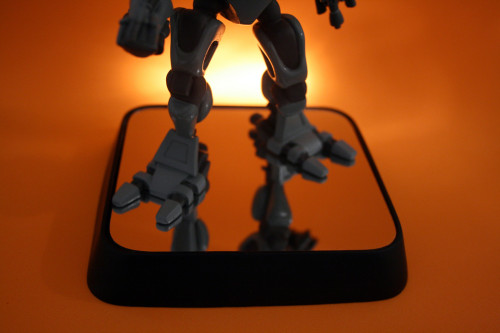 The Cylon Centurion stands slightly taller than Starbuck, at around 6″, and he’s limited to 1000 pieces. If you’re only getting one of these two new Galactica collectibles, the Cylon is the one to grab. He’s a cute little techno-terrorist and is just the right size to guard your office desk without making you into “that guy.”