Serenity: Leaves on the Wind #4 Recap 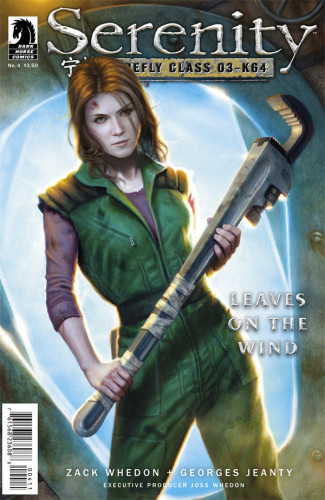 We’re back with the fourth issue of Serenity: Leaves on the Wind. The third issue kind of ended on a surprise for some and a nod at continuity for others. It will be interesting to see how this affects the crew’s galaxy-wide fame. It will probably just make the Alliance come after them more than ever.

The issue picks up a little bit after where the third issue left off, with the Operative joining the crew of Serenity to break into the Academy/lab where River was kept. No one particularly likes the Operative being on board — Jayne even asks to kill him later, since he tried to kill them all. However, there’s no other choice. After literally dumping Jubal Early, which I’m sure he survived, the crew gets down to business. 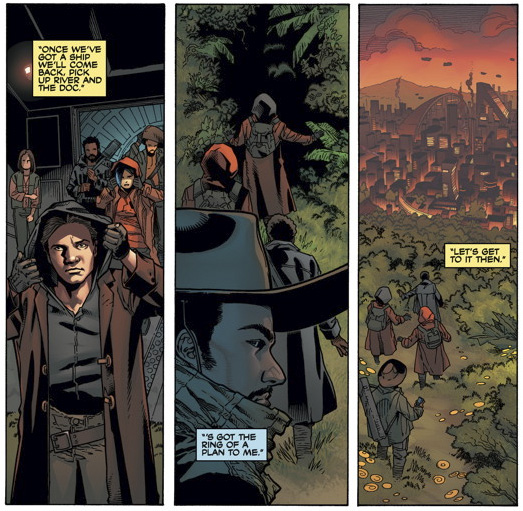 The Operative says that it will be even harder to break into the Academy since the security was upgraded after Simon broke River out. He says they need a ship, and that’s when Bea says she can help. The New Resistance will gladly give the hero Malcolm Reynolds any kind of ship he needs. Once they get their ship, it’s off to the Academy, where things do not go as planned.

The Operative stays behind while Mal, Jayne, Bea, and River move deeper inside the Academy. Once in the main lab area, they meet a creepy doctor who experimented on River and fawns over her. Then they see a row of girls, who are just like River. However the doctor says that these girls are complete and that River is not.

I liked that this issue took us into the Academy, where River was tortured. It helps give a little more insight on her past and just how horrible the Alliance is, or parts of it. It was nice to see the Operative again, especially now that’s he shifted his allegiance. I can’t wait to see what will happen with Zoe on her prison planet and how the crew will get out of the Academy.