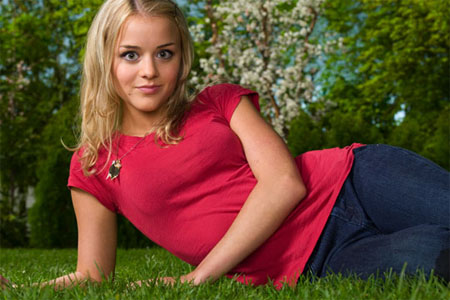 , which is returning to SciFi for its third season this summer. I recently had the opportunity to talk with her about her work and her interests in this exclusive Fandomania interview.

Fandomania: The third season of Eureka is scheduled to air on SciFi this summer. How far along in its production are you now?

Jordan Hinson: I know we’re going back to shoot in a month. As far as production goes, I’m really not in the loop. The new scripts will be a surprise to me, as well. I’m not positive about everything, but from what I do know, there will be a lot of twists coming in Season 3.

Fandomania: I know that some shows are very tightly structured and written, while others allow the actors to have some influence on how the stories unfold. How much say do you get in that area on Eureka?

Jordan Hinson: When it comes to the writing, I haven’t had any problems or changes I’d want to make. But when there is something we don’t quite like, the writers and producers are very accommodating.

Fandomania: You and Colin Ferguson have such great chemistry together on Eureka. What’s it like working with him, as well as off-screen?

Jordan Hinson: Colin is like a second dad to me. Every time I know I’m going to do a scene with him, life is basically complete. He makes work worth while, for everyone, I think. We hang out all the time in the off season.

Fandomania: Do you have any funny or cool behind the scenes stories from Eureka that you could share?

Jordan Hinson: Haha, everyone asks about practical jokes and things like that on set. But the part a lot of people don’t know is that our filming is nonstop. Nobody really has time to pull anything. Colin literally LOSES WEIGHT when we start shooting from running back and forth so much, having no time to eat.

Fandomania: In addition to being on Eureka, you also recently appeared on Dirt. What other projects do you have going on now or in the future?

Jordan Hinson: I just shot an episode of CSI: Miami which was incredibly fun to do. Getting to see how crews and sets for other TV shows work is so interesting. As for filming anything else before Eureka, it’s very difficult. We start shooting very soon, so it’s practically impossible to fit anything else in.

Fandomania: I’ve heard you’re a big Ghost Hunters fan. Is there a story behind that?

Jordan Hinson: To be honest, I hadn’t watched much of Ghost Hunters before I actually met Grant and Jason. After seeing what wonderful guys they both are, I figured I’d watch and see how it was. Ever since, I’ve pretty much watched every episode that’s been on.

Fandomania: Aside from Ghost Hunters, what else are you into? Fandomania covers all sorts of fandoms for TV shows, movies, comics, and so forth, so it would be fun to hear about anything you’re personally a fan of.

Jordan Hinson: My absolute favorite show is Dexter. I love that show. I also am a big fan of 24, The Office, Dirt, and Curb Your Enthusiasm. I’m a huge movie person, so that would be impossible to name all of them, but some of my favorites are American Beauty, No Country For Old Men, Children of Men, Unforgiven, Trainspotting, Kill Bill II, The Big Lebowski, Boogie Nights, Pan’s Labyrinth…etc. I really could go on forever.

Fandomania: I first met you at the FX show in Orlando, FL. What do you think about going to the conventions, and do you have some more appearances lined up now?

Jordan Hinson: I love doing conventions. It’s so much fun to meet the very people who keep your show going. As of now, I don’t know of any more conventions I’m doing, but I know I’ll do more.

Fandomania: Somewhat related to that, do you have any funny or interesting stories about meeting fans?

Jordan Hinson: The fan base is so interesting. It used to be only kids because I did a movie for Disney Channel, which was great. Kids are awesome fans. Now, the fan base is actually adults whom I can converse with and talk to about the show. I love that.

Fandomania: I’ve heard something about your being a writer in addition to acting and that you have written a script. Can you tell me a little about that?

Jordan Hinson: I really consider my first script a practice script. I still hold it in very high regards, but I know it’s too edgy for mainstream, and too mainstream for indie. But I have many other scripts I’m working on right now.

Fandomania: What are three things you would love to do or accomplish?

Jordan Hinson: I would love to be able to not only have a movie I’ve written be made, but also to produce it is my ultimate goal.

Also, I’m going to go with the typical answer. I really would love to win an Oscar at some point in my life. Whether it be for my acting or writing. I would just really hold that as one of my highest goals.

Fandomania: Thanks for taking the time to talk with me, Jordan.