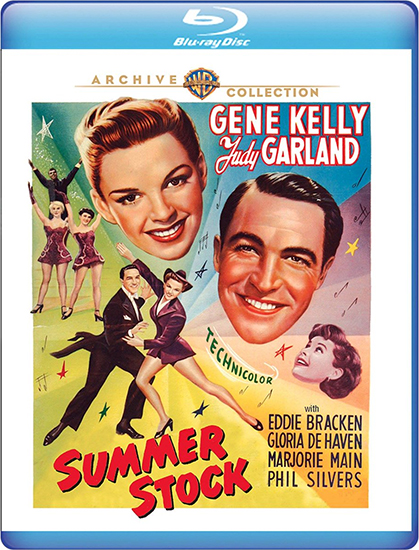 The “let’s put on a show” sub-genre of MGM musical magic gets a mature revisit in this frothy romp co-starring two of the greatest toe-tapping talents of American musical comedy – Judy Garland and Gene Kelly. In her final MGM musical, Garland plays Jane Falbury, a farm owner more than a bit riled up when her aspiring-actress sister (Gloria De Haven) appears with a theatrical troupe that wants to stage a musical in the family’s barn. But Jane goes from cornpone to cosmopolitan by the show’s climax, making cinema history with the show-stopping closer, “Get Happy.” Meticulously remastered, this Joe Pasternak production’s colors pop and shine with a hue unseen since its original release on this visual and aural feast of a Blu-ray Disc.

Summer Stock is now available from the Warner Archive, and we have one copy of the Blu-ray to give away to a lucky winner! You have from now through midnight Eastern time on the night of Friday, May 10, 2019, to get your entries in. Take a look at the form below to see all the ways you can enter.