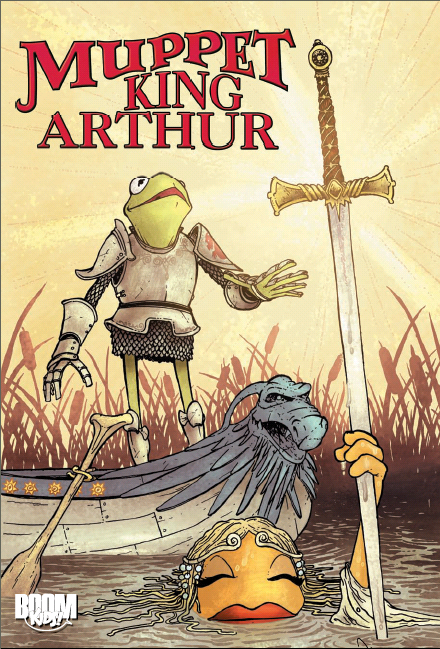 Muppet King Arthur was… interesting. When I see Muppets, especially Kermit and Miss Piggy, I think kids, but I’m not so sure the writers would agree. Sure, it has all your favorite Muppets playing characters from the classic King Arthur tale, but it also has a lot of jokes that I’m pretty sure a lot of kids just wouldn’t get. It felt like it was written more with adults in mind.

Alright, let me explain that a little. See, when I watch Shrek or any other well made children’s movie, there are always little jokes that I imagine were put there so that the parents being forced to watch it have something that makes them smile a bit too. It’s usually a little thing and it ends with my daughter looking at me with that “what’s so funny” expression on her face. In Muppet King Arthur, however, the more grown-up jokes were pretty much all there was! I know that if my daughter were to read this comic she’d be bored just a few pages in because she simply wouldn’t get it, which is a pity because otherwise it is a fun retelling of King Arthur. 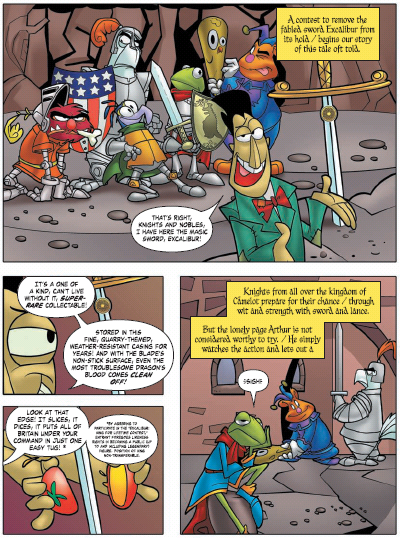 It starts like an infomercial, with the slick salesman pitching Excalibur. Arthur, a lowly page, is sent to get a new sword for Sir Sam of Eagle when his goes dull rather than just getting it sharpened. This is punctuated with a little joke about how buying a new one instead of fixing the old one will stimulate the economy.

The Lady of the Lake encourages Arthur to pull the sword from the stone, which he of course does. Sir Sam of Eagle protests, demanding a recount, to which someone replies, “Great. Nobody tell Florida.” As a reluctant Florida resident, I bow my head in shame for the stupidity of (some of) my fellow Floridians. Will we never be allowed to forget the vote counting debacle? Will it always be material for someone’s jokes?

Now, it’s not all bad. There were a few parts I liked, including the septagonal table which was too cute. The little notes from the editor were amusing. I even liked the Camelot’s Got Talent bit where they attempted to get the kingdom’s bravest knights on Arthur’s side to gain the support of the people, all through having a talent show with judges à la American Idol and the like.

There are some things that simply cannot ever change in a Muppet production and the most important one is that Miss Piggy is obsessed with Kermit and prone to jealousy. They didn’t let me down here. With Kermit as Arthur, Miss Piggy is the sorceress Morgana le Fey, who is very jealous of Lady Guinevere, even though it is obvious that Lancelot (played by Gonzo) is the one in love with her. 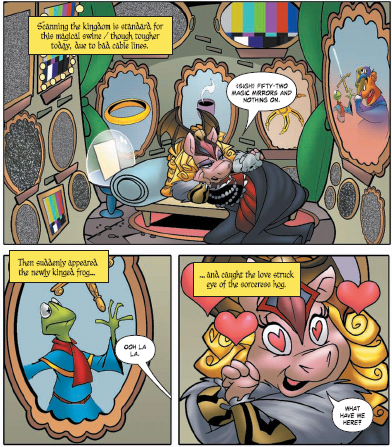 All your favorite Muppet characters, and mine, make an appearance. I was thrilled to see Beaker, who is my all time favorite. The poor guy, he still gets zapped, even during the Dark Ages! 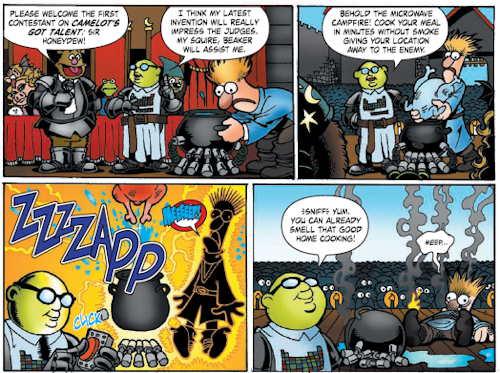 The whole comic was full of puns, so by the time I got to the Pun-Off challenge between Kermit and his nephew Mordred, I was definitely over it. It was actually kind of annoying and I couldn’t wait for it to be over. I could definitely have done without this part of the story.

Once the story ends, there are lots of previews of other Muppet comics. The previews actually make up about a quarter of the pages which I thought was a little much, but hey, advertising is necessary I guess. Just don’t be surprised when you hit the end of the story a lot earlier than you thought you would, page-wise.

Overall, Muppet King Arthur wasn’t all that bad. It wasn’t really all that good either, but to each his own. It could have been worse.