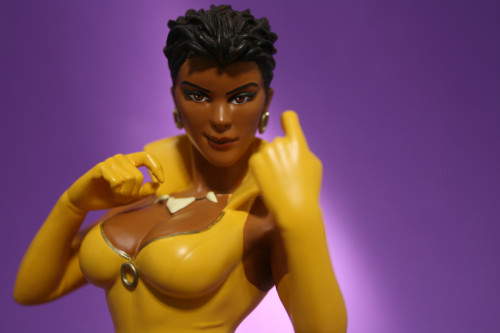 It’s that time again… There’s a new release in DC Direct’s Women of the DC Universe series, and I’m reviewing it! Longtime readers will know that I have a lot of love for this line of mini busts and have been collecting them from the beginning. There have been a few misses along the way, but for the most part each of the girls released has been a big hit for me. The newest character featured is Vixen, a heroine about whom I don’t know as much as I do about Wonder Woman, Supergirl, and the rest of the line. That didn’t stop me from adding her to my collection and snapping off a bunch of photos, though!

Vixen is in scale with the rest of the busts in this series, and she’s a limited edition like the others in the line. With releases like Batgirl and Supergirl having edition runs around the 5,000 to 7,000 range, Vixen’s edition size looks relatively small, at 2,500. That’s probably a good number for her, though, as she’s a newer character (she debuted in 1981 but only returned to prominence over the last few years) and hasn’t had enough time to build a fandom to rival some of the older DC greats. 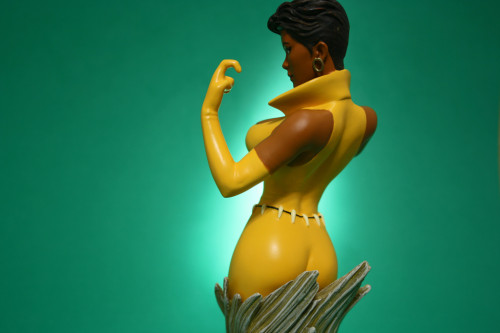 Part of the second series of Women of DC busts, the Vixen bust is designed by Terry Dodson, whose work really shines through here. Standing amid what looks to be a tall patch of savannah grass, which serves as the base, Vixen is posed in a come hither stance. Her left hand beckons, while her right hand looks like it’s lazily curling into a fist to pummel someone. The costume design is bright and appropriately comic book in style. DC Direct has a tendency to use flat paints on their sculptures, and it works here for Vixen’s overall bright yellow outfit. Her skintone has some nice slight variations on her face, and there’s a bit of highlighting in her hair. Those minor paint additions really do complete the bust. 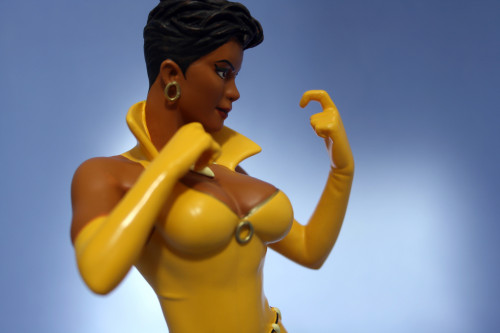 DC Direct has been a little obnoxious with earrings on the Women of DC busts in the past, and I was afraid they’d do something ridiculous with the final production pieces on this one. Thankfully, Vixen’s earrings turned out nicely and look just like they did in the prototype shots. No confetti stars glued onto this girl’s head! 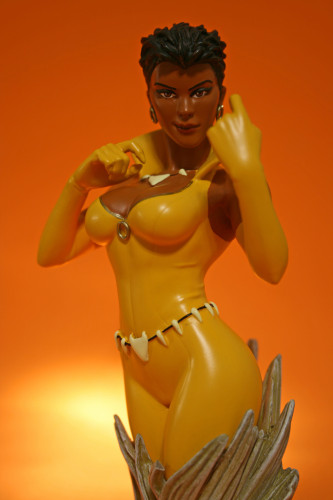 The overall piece looks fantastic, and it gets a definite thumbs up from me. The only thing that might make you hesitate before making a purchase is unfamiliarity with the character. If you are a Vixen fan or a Women of DC completist, however, there’s no reason to pass this one up.