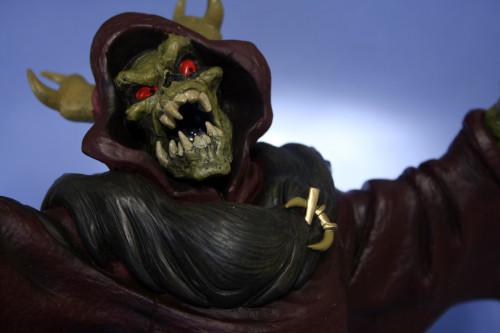 I’m acutely aware that I’m in a vast minority when I say that my all-time favorite Disney movie is The Black Cauldron, but there you go. It’s not a great adaptation of the original novels, but it’s what set me on the fantasy path when I was but a wee Gurgi. I’ve always had a soft spot for the characters and settings, even when the Gummi Bears cartoon stole half the character designs from the movie. It should be no surprise, then, that the Horned King is the first piece I’ve been compelled to pick up from Grand Jester Studios’ growing Disney collection.

All the statues and busts I’ve seen from Grand Jester look fantastic and accurate to the characters and source material they’re adapting. The Horned King is equally great, looking like he’s just snarled his way out of the movie and onto the top of my Ikea Detolf cabinet. The design chosen for the king is an interesting one, using the Black Cauldron itself as the base. The Horned King is suspended over the cauldron by a column of green slime, and he’s posed with his arms outstretched and head thrown back in some foul incantation. 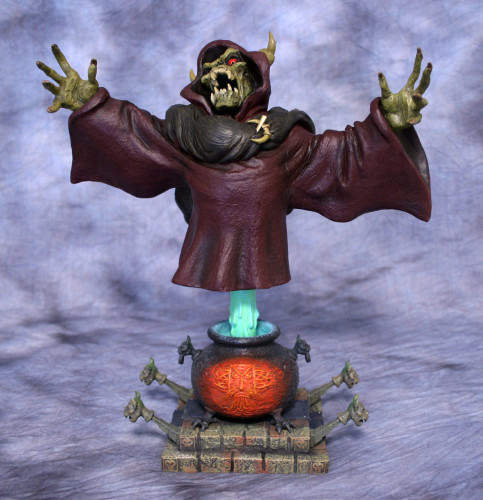 While the design theoretically seems really cool, it comes together a little wonkily. For one thing, the king is greatly out of scale with the cauldron. He’s massive, and it’s pretty tiny, which gives it an little bit of an odd look. My second issue is that the Horned King is portrayed hovering above the cauldron. The way he’s positioned makes the point at which the bust stops at the bottom look sort of awkward, like there’s something unintentionally missing. I think it’s because his relative size to the cauldron, combined with his bulky robes, make it seem like the Horned King should be a lot fuller and more imposing, but that’s sabotaged by the abrupt cutoff where he meets the green column. These abrupt cutoffs on busts always bug me, as with the Ringwraith Legendary Scale Bust (which actually hides the cutoff well from most angles) and Sideshow’s upcoming Rancor vs Luke diorama. The final design element that gets to me is the Horned King’s back-arching pose. It would look really cool on a full size statue, but on a bust it causes his face to point upwards and his horns to point backwards. That hides the most interesting parts of the character when he’s on display on a shelf, as he usually will be. 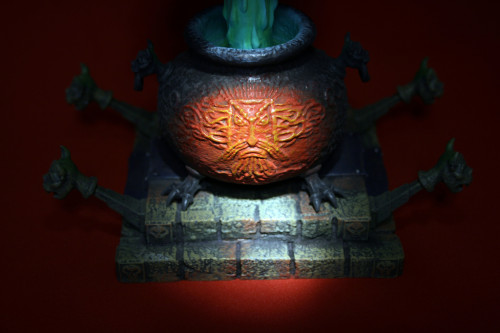 Now that I’ve gone through all those negatives, you probably think I hate this thing. Not so! Design quibbles aside, the Horned King is a really nice collectible with accurate sculpting, tight paints, and a great overall look. I especially like the detailing on the Black Cauldron that matches the coloring and face designs from the movie. The Horned King’s hands are suitably gnarled, and his face is hideously skeletal, all in keeping with the source material. If you’re a fan of the original lore or of the Disney movie, this is a great bust to have in your collection. 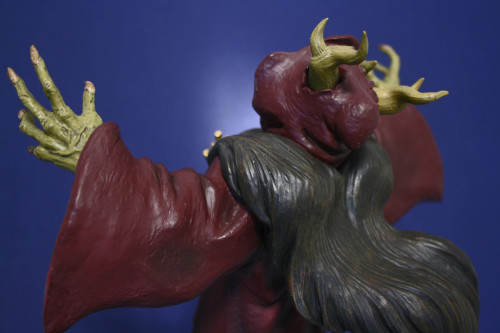 The Horned King bust stands around 10″ tall and is limited to 1000 pieces. I’m super happy to finally have a good Black Cauldron collectible in my house, despite the issues I have with the design. I think this bust would have been better as a full-size statue or even a diorama, but if a bust is the only way I can bring this slightly obscure Disney baddie home, so be it.