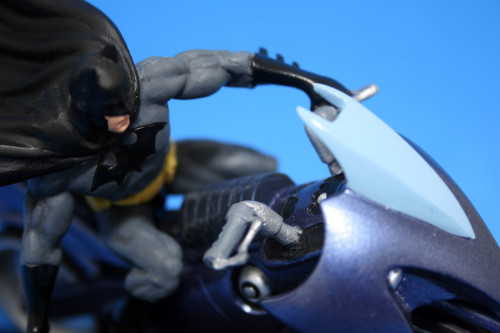 I’ve had a sort of love / hate relationship with Eaglemoss’s lead figurines in the past. On the plus side, they’ve been putting out a metric ton of collectibles based on properties and characters I really love. It’s awesome to see shelves loaded with all the X-Men, Avengers, Gotham villains, and more. On the negative end, however, the craftsmanship has been a little spotted on some of the releases and downright horrible on others. Still, Eaglemoss often delivers really cool pieces, especially given the low price point. Their newest DC Superhero release is a little costlier than their average figures, clocking in at around three times the normal cost. Is the Batcycle worth the increased price and shelf space? You’d better believe it.

As the first oversized vehicle release in the superhero series, the Batcycle breaks some new ground for the line. I really like that they kept the bike in scale with the rest of the figurine releases and also included a unique Batman astride it. Batman looks very spiffy, dragging a batarang at the side of the bike and billowing his trademark cape out behind him. The cycle itself is the real star of this release, though. 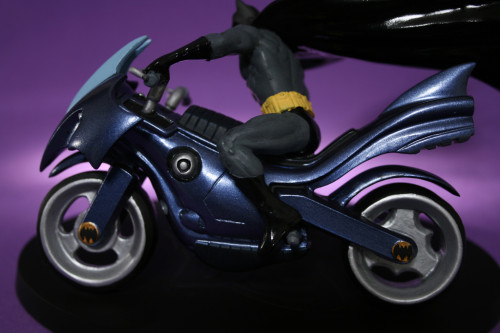 These figurines are pretty small in scale, so the level of detail on the Batcycle is especially impressive. It reminds me of the Iron Man Mark I figurine Eaglemoss previously released in their Marvel line, completely detailed with machinery. The sculpt of the Batcycle is dead-on and looks really impressive on its own or alongside the rest of the DC figures. The paints are equally tight, and I love that the bike’s body has a slight shimmer in its paint scheme. It makes the overall piece look like a small-scale high end collectible. 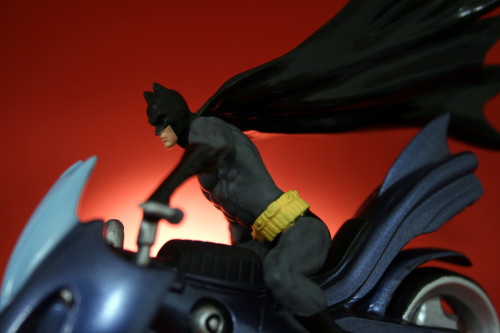 I’ve been collecting the Marvel and DC lines from Eaglemoss, and this newest addition to the collection very possibly could be my favorite of their figurines to date. It has great design, fantastic presence, and comes together with a sculpt, a paint job, and a final production that outshines most of the rest of the series. Thumbs way up on this one.