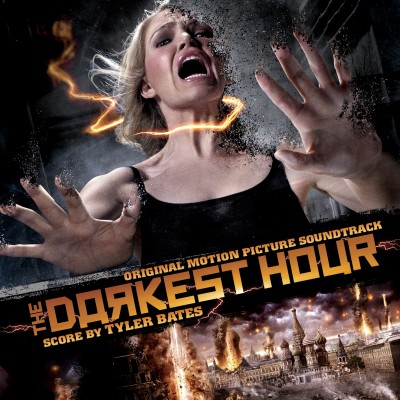 Tyler Bates, the man who brought us the soundtracks for a variety of genre films including 300, Watchmen, and Sucker Punch, is back with the score to The Darkest Hour, which tells the story of five people trying to survive in the alien-ravaged city of Moscow. Director Chris Gorak describes Bates as the “master architect of [the film’s] sonic world” and gushes about Bates’s “heart-pounding and heart-wrenching signature score.” I, however, am not so quick to agree with his accolades for this soundtrack where few tracks stood out and most left me thinking that I had heard it all before.

When I was in grad school for music education, one professor had us do several activities that were based around a scene from the movie Speed and its accompanying musical track: a baby carriage gets away from an older woman and the audience watches helplessly as it rolls down the hill toward an inevitable collision with the speeding bus, not realizing until the collision happens that the woman is a bag lady and the carriage contains her collection of aluminum cans. I was reminded of that soundtrack over and over again as I listened to this one. The synthesized rock percussion and driving bass lines coupled with hugely dramatic crescendos leading to sudden silences could have come from any number of action movie soundtracks from the last twenty years. The other alternative on this album — quiet, non-rhythmic sections full of eerie electronic string tones — is also a fairly common musical device for this type of film.

Although much of the soundtrack runs together and quickly starts to sound the same, there are a few notable tracks. The album begins with two songs, “I Like That” by Richard Vission and “Mockba (Moscow)” by Marselle. As for Bates’s instrumental tracks, “Northern Lights” (track 4) is an interesting mix of modern rock sounds and classical-style synthesized choral voices, while “Say Goodbye” (track 15) features a tender piano melody with just enough atonal electronic strings to subtly remind you that something is not right. Unfortunately, I only found these gems after listening closely a second or third time.

The Darkest Hour is not a bad soundtrack, and I’m sure it is highly effective within the context of the movie. As a musical work by itself, however, it’s not different enough from many of the other action movie soundtracks out there to warrant a closer look.