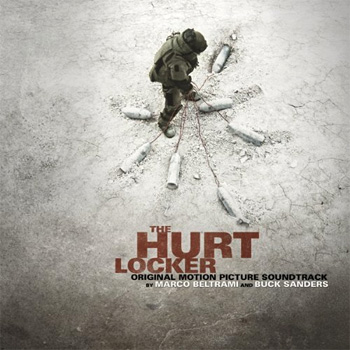 The subtle, poignant sounds of the score composed for Kathryn Bigelow’s Oscar-nominated film The Hurt Locker are the result of a collaboration between seasoned film composers Marco Beltrami (3:10 to Yuma, Live Free or Die Hard, Underworld: Evolution) and Buck Sanders (In the Electric Mist, The Omen). When composing a musical score for a riveting war drama like The Hurt Locker, the challenge lies in creating compositions that are able to compliment both high-powered action scenes as well as the emotional intensity of The Hurt Locker‘s more dramatic scenes. The musical score must be seamlessly integrated with the film’s diegesis without overpowering or disappearing behind it.

Although the rest of the film’s sound team, which includes Paul N.J. Ottosson, Ray Beckett, and Craig Stauffer, deserve credit for their contributions to the sound mixing and sound effects added to The Hurt Locker, Beltrami and Sanders’s compositions are an integral part of the film’s various soundscapes. In the liner notes of The Hurt Locker soundtrack, Beltrami discusses the final product, describing what he and Sanders hoped to achieve:

“Thematically, we decided it should conjure up images of a western since the main character’s attitude is that of an independent cowboy. Then we used various performance techniques to achieve the atmosphere of an unpredictable, alien landscape.”

As anyone who has watched the film will undoubtedly attest, the final track heard in The Hurt Locker, which also landed as the last track on the musical score, stays with viewers for some time after they leave the movie theater or turn off the DVD player. “The Way I Am” pulls the 31-minute soundtrack together perfectly with its “independent cowboy” feel and emotional depth that infuse both the scene and the score with a sense of hope. 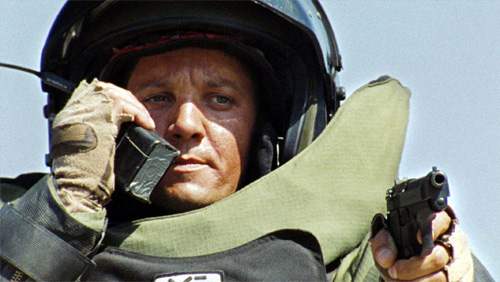 According to Buck Sanders, The Hurt Locker director Kathryn Bigelow wanted the film’s sound to “blur the line between sound effects and score.” For that reason, Sanders and Beltrami “decided to use a small ensemble and some of the film’s production sounds and then fused them together.” By fusing the sound effects and the musical score, Beltrami and Sanders are able to effectively generate feelings of urgency and heighten the emotional intensity displayed on the screen for audiences. When viewers find themselves clenching their hands, curling up into a ball, or drawing in upon themselves in anticipation of the next nerve-wracking event, they not only have the dangerous exploits of Sgt. William James (played by Jeremy Renner) to thank for their emotional empathy and temporary discomfort, but the expertly designed and well-placed compositions of Beltrami and Sanders as well.

Given how successfully Beltrami and Sanders’ score achieves balance between action and emotion, it will come as no surprise that the two have teamed up before on a number of projects that range as far back as 1997 and include the Academy Award-nominated score for James Mangold’s 3:10 to Yuma. It will also come as no surprise that The Hurt Locker soundtrack was nominated for a BAFTA for Best Sound, a Cinema Audio Society Award (C.A.S. Award) for Outstanding Achievement in Sound Mixing for Motion Pictures, and several other awards for similar achievements. “It was evident from the moment I met Marco Beltrami and Buck Sanders that they would provide the perfect sonic tapestry to animate these existential themes of man and death,” Kathryn Bigelow commented recently, and although The Hurt Locker‘s soundtrack did not win any Academy Awards it is very clear that Bigelow’s initial feelings about her composition team were correct. They created one of the best musical scores released over the past several years.