Max Allan Collins has been writing since 1973, starting with the Nolan series. He has written numerous series including the Quarry series and the Nathan Heller series. Collins has also written many movie novelizations, such as Saving Private Ryan, The Mummy, and more. He has written some comic books, which include Dick Tracy and Road to Perdition, which was made into a feature length movie staring Tom Hanks.

When his friend and fellow author Mickey Spillane died in 2006, Collins was given some of Spillane’s incomplete novels to finish, one of which was The Consummata, which I reviewed here. I had the opportunity to have an interview with Max Allan Collins and ask him a few questions.

Do you enjoy writing crime/mystery fiction?

Max Allan Collins: That’s always been my chief interest as a writer, and when I’ve worked in other fields — horror and science-fiction, for example — elements of crime and mystery are always present. Every good story has a conflict, and a crime story is inherently conflict-driven. The tough mystery story…call it noir…has elements of sex and violence, and those are the big themes: life and death in their elemental form.

Do you recommend reading The Delta Factor before reading this book?

MAC: That’s not really necessary. Delta Factor isn’t in print right now, although it was a bestseller so wouldn’t be hard to track down. But I designed the book to be standalone, and worked in plenty of back-story early on to ground the reader in Morgan the Raider’s world.

How much of the book did Mickey Spillane write before giving it to you?

MAC: I worked from about 100 double-spaced pages. The final manuscript was around 300 pages.

Did you try to recreate Mr. Spillane’s style? If yes, was it hard to do?

MAC: I grew up reading Mickey’s work almost obsessively, and his style was an influence on mine, though there were plenty of other influences, like Hammett, Chandler and James M. Cain. What I do in preparation is read novels of Mickey’s that were written about the same time as the manuscript I’m working from, to try to nail his voice during the period he created the partial manuscript. I don’t find it terribly difficult, in part because he’s working in the first person, so it’s more a matter of getting the character down than anything else. 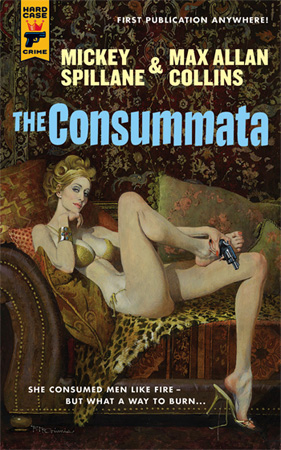 Do you have a favorite part in the book? What is it?

MAC: The final several chapters work very well — Morgan invading an S & M party in a mansion, then fleeing by boat. Some nice surprises, too.

Will Spillane fans enjoy this book?

MAC: I think Spillane fans will have a great time. The support from Mickey’s fans for these posthumous collaborations has been incredible.

Was it difficult to finish a book started by someone else?

MAC: No, not in this case. First of all, I’m used to collaborating — I write thrillers with Matthew Clemens, who co-plotted the CSI novels and did all the research, and my wife Barb and I write a humorous mystery series under the joint byline “Barbara Allan”…latest of those is Antiques Knock-Off. Not Spillane-ish in the least. But as for working on a Spillane manuscript, that’s a privilege and an honor. For as popular as he was, Mickey was not prolific — he completed only 13 Mike Hammer novels in his long career. As a fan, I delight in the idea of adding half a dozen more Hammer novels with genuine Spillane content to the canon. And after all these years, to have a second Morgan the Raider novel — I’m thrilled about that.

Will you be writing more Morgan the Raider novels?

MAC: Doubtful. This one has an open ending that readers can think about and consider in a way that I think is a lot of fun. Still, you never know, and there are a number of unfinished non-Morgan stories in Mickey’s unpublished files that might be converted to a Morgan tale.

Is it your plan to finish any other books started by Mr. Spillane?

MAC: There are two more Mike Hammer novels to complete. After that, I may turn several unproduced screenplays of his into novels, and there are a number of other, shorter manuscripts that could be expanded. Initially, I wanted to focus on books that Mickey had got a real start on — substantial manuscripts of 100 pages or more.