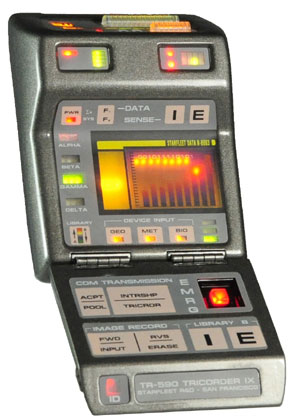 Last year, a then-newcomer company to the collectibles market called eFX Collectibles was awarded the license to make Star Wars replica props and collectibles. They’ve made good use of the license throughout 2008 and 2009, and now they’re expanding into another beloved sci-fi franchise. This week eFX announced that they will be making a line of Star Trek collectibles, beginning later this year.

The first piece in eFX’s Trek line will be a replica of the Mark IX Tricorder, as featured in Star Trek: First Contact. The tricorder will be limited to 1000 pieces, and eFX plans to release it in a signature edition with Data actor Brent Spiner’s autograph.