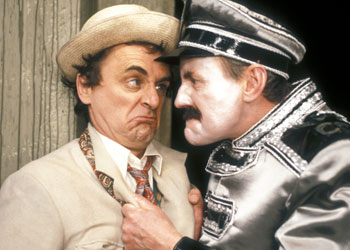 Tom Baker and Sylvester McCoy take center stage this week with BBC’s two newest DVD releases in their classic Doctor Who line. The Fourth and Seventh Doctors are joined by their companions for two more adventures from Doctor Who‘s history, one dating back to the ’70s and the other to the ’80s.

The Fourth Doctor arrives on Pluto with his companion Leela to find that the previously uninhabitable planet has become livable in the far future. Humans have improved the atmosphere and heated the planet’s surface with several miniature suns, allowing for humanity’s further expansion into space. The Company rules the planet and oppresses the general population with bureaucracy and taxation. When Leela is captured and threatened with death, it is up to the Doctor to set things right.

“The Sun Makers” originally aired in November and December of 1977 as a four part serial. All four episodes are collected in the new DVD release, along with an assortment of special features: 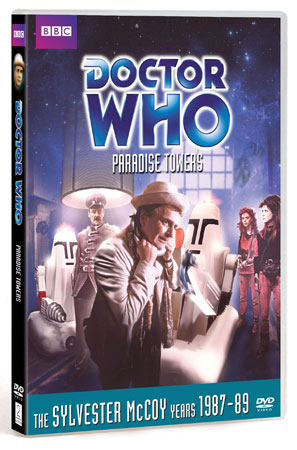 The Seventh Doctor and Mel travel to the 22nd century to Paradise Towers, a luxury high rise advertised as a utopian state of the art living community. Mel is looking for a place to take a swim, but instead the duo find a tower fallen into disrepair and rampaged by roaming gangs and other, worse threats. With the inhabitants in peril, the Doctor ventures through the building to confront the evil lurking within.

“Paradise Towers” originally aired in October of 1987 in four parts, all of which are collected on the DVD. The new release also sports the array of bonus features we’ve come to expect from BBC’s classic Doctor Who collection:

Both “The Sun Makers” and “Paradise Towers” release on DVD this Tuesday, August 9, 2011.