The third season of BBC’s popular Doctor Who spinoff released this month on DVD with The Sarah Jane Adventures: The Complete Third Season. Sarah Jane is back for more sci-fi excitement with these 12 new episodes that never have aired in the US prior to this release.

Sarah Jane Smith is one of the most popular companions to the well traveled Doctor in the long history of Doctor Who. It stands to reason, then, that one of the series’s two spinoff shows would focus on her character and her own adventures. Elisabeth Sladen reprised her role as the ever inquisitive journalist when The Sarah Jane Adventures premiered on BBC in January 2007 and complete this third season in November 2009. TSJA follows the science fiction and alien patterns of Doctor Who while carrying a younger tone and supporting cast to make the show more appealing to younger audiences. 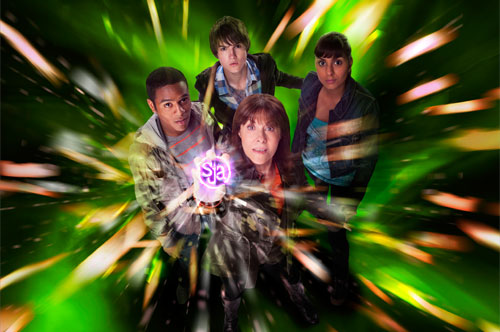 The bulk of the series follows Sarah Jane and her adopted son Luke (Tommy Knight) through all sorts of crazy encounters with interstellar visitors and intelligent machines. Other teenagers play supporting roles throughout, and the Doctor’s tin dog K-9 joins Sarah Jane early in the series, following the return of both characters in the 2006 Doctor Who episode “School Reunion.” The third season has students Clyde (Daniel Anthony) and Rani (Anjli Mohindra) accompanying Sarah Jane and Luke.

The Sarah Jane Adventures presents story arcs as two episode blocks, with some continuity running throughout each season. Season three has twelve episodes, comprising six such arcs. The season begins with “Prisoner of the Judoon,” in which Sarah Jane and her friends encounter the rhino-like aliens that comprise an intergalactic police force, first seen in the Doctor Who episode “Smith and Jones.” The middle of the season presents “The Wedding of Sarah Jane Smith,” in which Sarah Jane announces that she’s seeing a man and then quickly proceeds to the altar. This episode is significant in that it co-stars David Tennant as the Tenth Doctor and, being shot after Doctor Who‘s “The End of Time,” contains the final scenes in which Tennant acts as the Doctor. The season concludes with “The Gift,” featuring the Doctor Who alien villains the Slitheen, as well as the Blathereen, a new and related type of extraterrestrial. 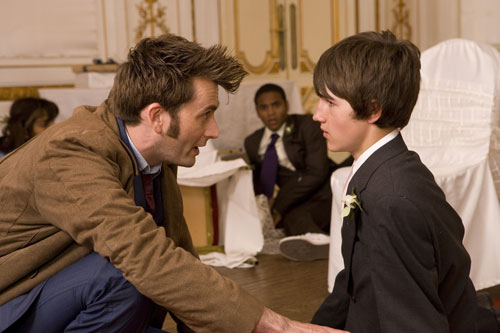 This new DVD release collects all twelve episodes from the third season on two discs. Also included on the second disc is a five minute excerpt from the audio book The Sarah Jane Adventures: The White Wolf, read by Elisabeth Sladen. Given that the audio excerpt really is just an advertisement for the audiobook, there really aren’t any bonus features to be found in this set. That’s a shame, given the wealth of features to be found in the Doctor Who season sets, as well as in the classic Doctor Who DVD releases, not to mention on the previous TSJA DVDs. Even without any significant special features to peruse, the third season set of The Sarah Jane Adventures is a great collection for fans of the series of all ages. Additionally, David Tennant’s appearance in the middle of the season makes these DVDs must-haves even for Doctor Who fans who otherwise haven’t been keeping up with Sarah Jane.