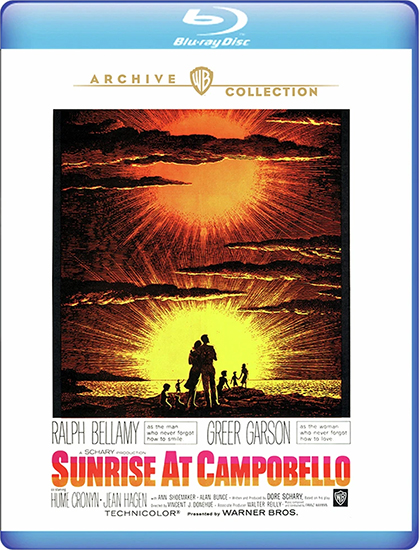 He led America’s battles against the Depression and the Axis powers – and won. But first Franklin Delano Roosevelt fought a personal battle against polio that would either destroy him – or arm him for greatness. This powerful film of Dore Schary’s long-running play is an intimate, admiring profile in courage. Ralph Bellamy reprises his dynamic Tony®-winning stage portrayal of the future President, and Greer Garson is his devoted, warbly-voiced wife, Eleanor. Both were uncannily true in their roles, and acclaim followed: Garson earned Golden Globe® and National Board of Review Best Actress awards, as well as one of the movie’s four Oscar® nominations. With exteriors filmed at Campobello and Hyde Park and interiors staged on uncanny duplications of the real-life Roosevelt homes, Sunrise at Campobello shines eloquently and movingly.

Sunrise at Campobello is now available on Blu-ray, and we have one copy of the Blu-ray pack to give away to a lucky winner! You have from now through midnight Eastern time on the night of Wednesday, November 25, 2020, to get your entries in. Take a look at the form below to see all the ways you can enter.