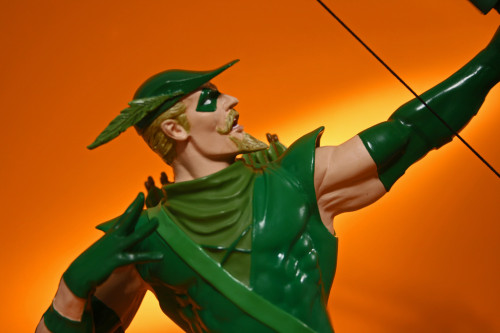 The last character featured in DC Direct’s Heroes of the DC Universe collectible bust series was Aquaman, with a surprisingly outstanding addition to the line. Oliver Queen, the Green Arrow, is the newest release, and here’s a look at how he stacks up to his predecessors.

Traditionally, DC Direct’s line of female characters (Women of the DC Universe) has produced collectibles that are superior to the male lines (Heroes and Villains of the DC Universe). The females tend to be more detailed, have better paint applications, and generally look like higher quality pieces than the males do. Aquaman changed that trend by outshining all the previous male busts and even rivaling and surpassing many of the female ones. By releasing a fantastic Aquaman, DC Direct set the bar a bit higher for the Heroes series. Does Green Arrow meet the new expectations? Well, not really. 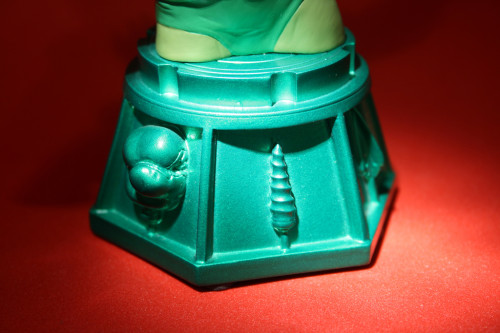 Make no mistake, this is an absolutely faithful and good Green Arrow collectible, and fans of the character and collectors of this series will want it in their collections without reservation. The pose is dynamic, showing Ollie in action, having just loosed one of his arrows and with his bow still held aloft. The sculpt is accurate, and the overall design is good, from the details in the quiver down to the base that features a different trick arrow head on each of its six angled sides. 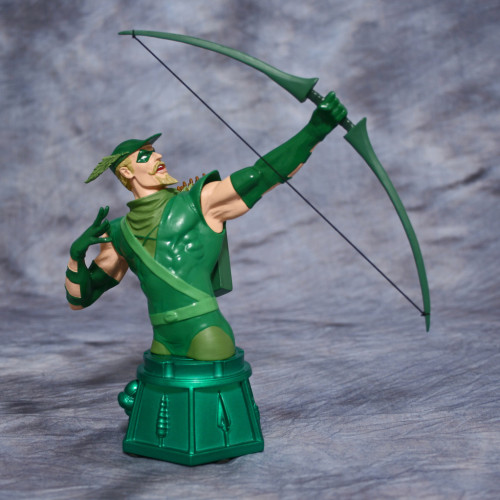 Where the bust fails to hold up is in the paint job. There’s a little bit of shading variance in Green Arrow’s hair and beard, but otherwise all the paints on this bust are flat, just like they’ve been in the past on many releases in this series. There’s nothing patently bad about the paint, but neither is it in any way great. It’s just a competent and mechanical layering of greens and fleshtone. It’s all neat and within the lines, but there’s no expression or real artistry to the paintjob. That’s a shame, because the merely competent paint job is the only thing that brings down the quality of this otherwise great bust. 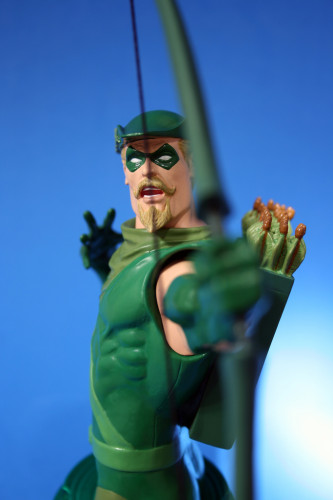 The Green Arrow bust fails to meet the expectations set by Aquaman, but it definitely isn’t as bad as the previously released Superman bust. Green Arrow floats somewhere in the middle and, aside from bland paints, is a fantastic representation of the character.