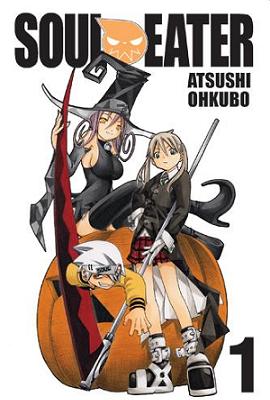 In Death City there is a school, and the purpose of this school is to train weapon meisters and their anthropomorphic weapons. Once the meister learns his or her weapon (or weapons), it must kill and then eat the souls of 99 evil people and one witch in order for the weapon to be used by Death himself. (In the case of two weapons, each weapon must eat the 99 + 1 soul.) The first issue of Soul Eater introduces us to the three main protagonists of the series and their weapons. 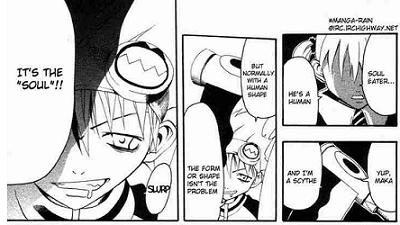 The first characters we meet are Maka, a weapon meister, and her scythe, Soul Eater. The pair are finishing off Jack the Ripper’s soul when they are first introduced, which just happens to be their 99th human soul. The only thing left is to find a witch, defeat her and eat her soul. We also get to see Death, who goes by the name Shinigami and who is a bit silly sounding, and Death’s weapon Death Scythe, who also happens to be Maka’s womanizing father.

I really liked the dynamic of the carefree Soul Eater and the slightly insecure-girl-on-her-own Maka, and I see potential for them both to grow as characters. Maka has family issues to deal with, and that gives her something readers can relate to when they are reading. However, in this first prologue I did find myself wincing a little at some of the absurd and pointless silliness juxtaposed with the ultra sexiness of Blair, a cat with magical powers. One of my big pet peeves with anime and manga is the gratuitous T&A, but then again I’m likely not the target audience — I would have to guess young boys of all ages are the intended readers.

The next section introduces Black Star and his weapon Tsubaki, who is a chain scythe. He is a pompous attention-seeker who, rather than collecting souls, is collecting dramatic entrances. He and Tsubaki have yet to eat one soul, although Black Star takes things seriously (because he feels someone else is trying to take the spotlight from him… which leaves me wondering, besides talking to himself… what spotlight?). His weapon is definitely the brains of the operation, as well as seeming to be the more responsible one. I do like that when he does get a little serious, you get the hint that he really wants to “do right by her” and get the souls; he just has shiny object syndrome. 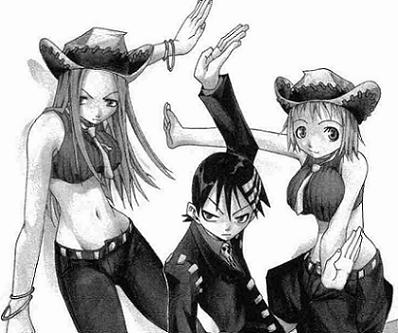 The last set of what looks to be the main characters in the series is Death the Kid, son of Shinigami, and his dual weapons Liz and Patty, who are guns. Death the Kid, usually just called Kid, is obsessed with symmetry, which he is almost OCD about. He ducks out of a mission to collect souls, leaving Liz and Patty to fend for themselves while he makes sure a picture is exactly centered on his wall at home. He becomes upset with himself when things aren’t even, and constantly wonders why Liz and Patty, who are twins (although fraternal twins) have different-sized boobs.

Here again I get annoyed about by the T&A — he could have just commented that they were fraternal twins or that they had different sizes and shapes (and, it seems, intellect) but instead it goes straight for the comparative boob grab. This again proves that this is not marketed to me. It is definitely Shōnen, no doubt. The Kid seems like he will probably be my least favorite at this point, but I have to wait until I learn more about him. Being the son of Death, he doesn’t have to collect souls, but he chooses to, though this decision isn’t really discussed. 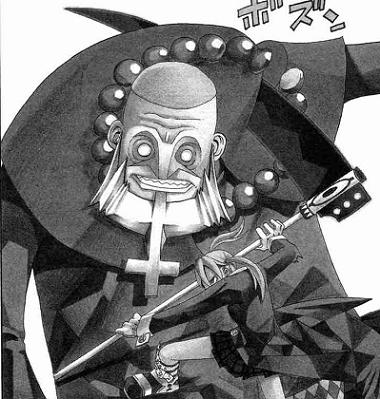 After the three prologues to introduce the characters, chapter one finally begins. Maka with Soul and Black Star with Tsubaki discover that, for differing reasons, they have to take remedial lessons, and we get a chance to see how the series will likely start getting in on the real action. I don’t want to give too much away, but I will say that up until this point I was really skeptical about the story; it seemed a little too silly and aimed at young boys for my personal taste with little enough story. The thing is, I just hadn’t gotten to the story yet.

What I will say is that it is a fun read — nothing too serious, but will be a perfect Halloween splurge. I will be giving the next book a chance; I only hope for all the fluff there’s a story that goes along with the concept. I don’t know if it was necessary to introduce the characters up front like that rather than introduce them through the course of the narrative, but now at least the “getting to know you” stage is over and we can hopefully get into the nitty gritty. I would give this a three out of five stars, with high hopes that the story will be what really hooks me in book two.