For this week’s Fandom Deathmatch, we’re taking two wicked, leather-jacket-wearing vampires and pitting them against one another to determine who holds the crown for for best bleach-blond vampire of them all! 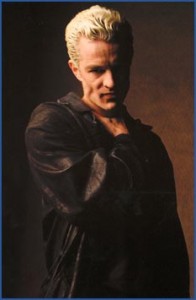 History: Born under the name William in London, England, Spike was raised by his mother as a common gentleman. In 1880, he took up a love of poetry, which did not interest the fairer sex. Eventually, he caught the eye of Drusilla, who turned William into one later known as William the Bloody, or Spike (a nickname based on his use of railroad spikes as instruments of torture). Over the course of 120 years, Spike would kill two Slayers, fight against Nazis, slaughter innocents, and even battle Dracula himself.

Strengths: Over 100 years of combat knowledge. Strategist, analytic in fighting styles, and good at improvisation. 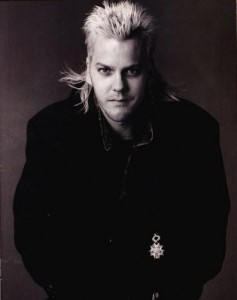 History: Very little is known about David, aside from his status as the leader of his small tribe of vampire thugs. They roam the seafaring town of Santa Carla, CA, killing practically every night, giving the town the distinction of “the murder capital of the world.” It isn’t known how old he is, only that he takes orders from their head vampire… who is believed to be old enough to remain undetected and unchallenged by the tribe.

It’s easy to say that a battle between these two would begin with words, quickly evolving into fists and then fangs. Spike would quip against David, who would likely roll his eyes at any attempt at insult. We can assume the banter would remain one-sided, unless drugs or motorcycles are involved, in which case David would have the upper hand. 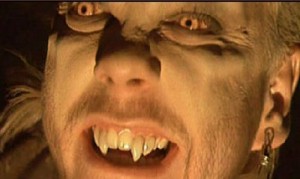 Both of these vampires are vicious in their own rights, taking out groups at a time and enjoying every blood moment of it. Sometimes a kill wouldn’t even be for blood, but just to hear the victim scream. If a battle between these two weren’t the subject of our discussion, you could easily imagine them hanging out after a nice massacre (though I doubt David would have the stamina to put up with Drusilla [or Harmony, for that matter] for as long as Spike, so points go to Spike for patience).

One major advantage David would have over Spike is flight. Spike may be able to jump high, but fly he cannot. It would not be out of character for Spike to scream “cheater!” if David were to take flight and attack Spike from above. It’s his main advantage, and he’ll exploit it! 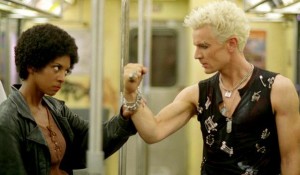 While Spike is, technically, a half-demon, it is not known specifically what type of vampire David is. While he has the same ridged face and fangs as Spike, he is far weaker in body. It is more difficult to kill a vampire of Spike’s nature, and if done, he would turn to dust. David, however, would simply be a dead body (or explode into goo… depending on the situation). Based on their respective vampiric natures, Spike would have the upper hand. 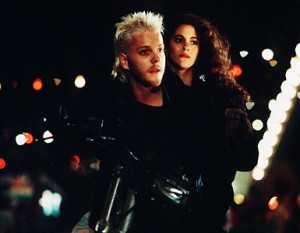 While David’s age is left in question, there is no doubt that Spike has an intense knowledge of fighting styles. Not only has he lived over a hundred years (and spent most of that time fighting), but he has killed two Slayers, a feat normally unheard of in vampire circles. It is doubtful David ever faced a Slayer, or anyone of her nature — especially considering most of his tribe was killed by pre-teens.

A special point must be made in acknowledgment of Spike’s later history, in which he regained his soul and began to fight for the “good guys.” During much of this time he was only able to cause harm to non-humans. Thus, Spike would still be fully able to give David a good beating… and very likely he would, out of spite of another vampire having a similar “look.”

Though both vampires are excellent examples of the modern bad boy, it is pretty clear who would win if pitting them fang against fang. The winner is… 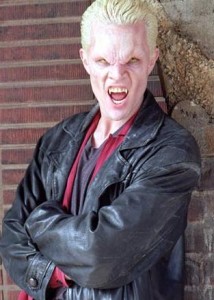