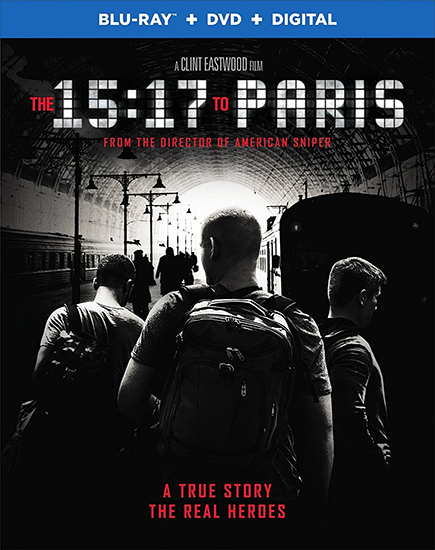 Our friends at Warner Bros Home Entertainment provided the Blu-ray prizing for this giveaway.

In the early evening of August 21, 2015, the world watched in stunned silence as the media reported a thwarted terrorist attack on Thalys train #9364 bound for Paris—an attempt prevented by three courageous young Americans traveling through Europe. The film follows the course of the friends’ lives, from the struggles of childhood through finding their footing in life, to the series of unlikely events leading up to the attack. Throughout the harrowing ordeal, their friendship never wavers, making it their greatest weapon and allowing them to save the lives of the more than 500 passengers on board.

The 15:17 to Paris releases on Blu-ray and DVD on May 22, and we have one copy of the Blu-ray combo pack to give away to a lucky winner! You have from now through midnight Eastern time on the night of Monday, May 28, 2018, to get your entries in. Take a look at the form below to see all the ways you can enter.