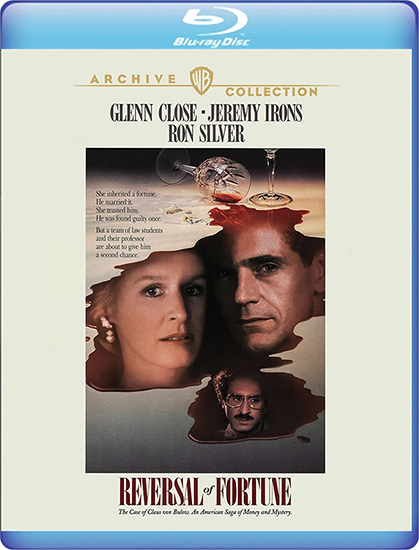 Did European aristocrat Claus von Bulow (Jeremy Irons) try to murder his wife, Sunny (Glenn Close), at their luxurious Newport mansion in 1980? Tabloids of the day had their opinions. “You have one thing in your favor,” defense attorney Alan Dershowitz (Ron Silver) told von Bulow. “Everybody hates you.” Written for the screen by Nicholas Kazan (Fallen, At Close Range), directed by Barbet Schroeder (Single White Female) and based on Dershowitz’s book, Reversal of Fortune is the acclaimed filmization of events that had all of America talking. For his precise portrait of icy brittleness, Irons won the Best Actor Academy Award®* as well as the Los Angeles and National Society of Film Critics Awards. Think you know the truth? Until you watch…you have no idea.

Reversal of Fortune is now available from the Warner Archive, and we have one copy of the Blu-ray to give away to a lucky winner! You have from now through midnight Eastern time on the night of Monday, January 18, 2021, to get your entries in. Take a look at the form below to see all the ways you can enter.