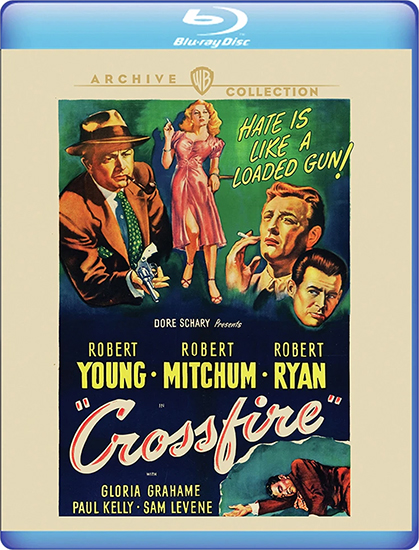 Years of police work have taught Detective Finlay that where there’s crime, there’s motive. But he finds no usual motive when investigating a man’s death by beating. The man was killed because he was a Jew. “Hate,” Finlay says, “is like a gun.” Robert Young portrays Finlay, Robert Mitchum is a laconic army sergeant assisting in the investigation of G.I. suspects, and Robert Ryan plays a vicious bigot in a landmark film noir nominated for five Academy Awards®, including Best Picture. Edward Dmytryk (Murder, My Sweet) directs, draping the genre’s stylistic backdrops and flourishes around a topic rarely before explored in films: anti-Semitism in the U.S. Here, Hollywood takes aim at injustice…and catches bigotry in a Crossfire.

Crossfire is now available from the Warner Archive, and we have one copy of the Blu-ray to give away to a lucky winner! You have from now through midnight Eastern time on the night of Monday, April 12, 2021, to get your entries in. Take a look at the form below to see all the ways you can enter.