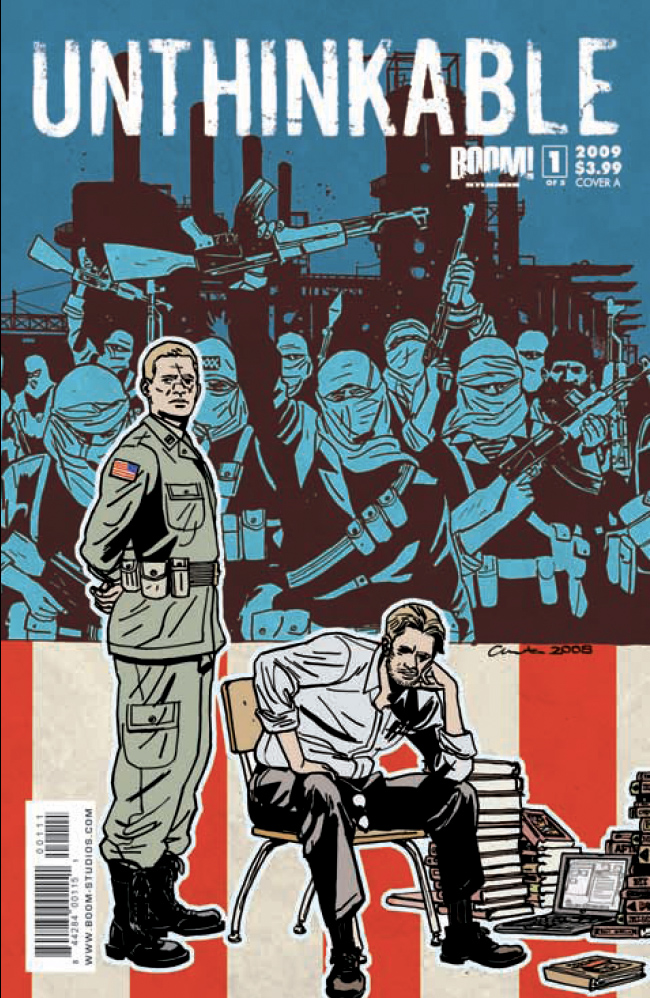 After the events of 9/11, a bunch of nutters are gathered together in a government Think Tank to think up the most outrageous and crazy terrorist scenarios. They are told they’re doing this so the government can be prepared to protect out country against future attacks. Eight years after the Think Tank is suddenly shut down, all the unthinkable events they thought up start happening. 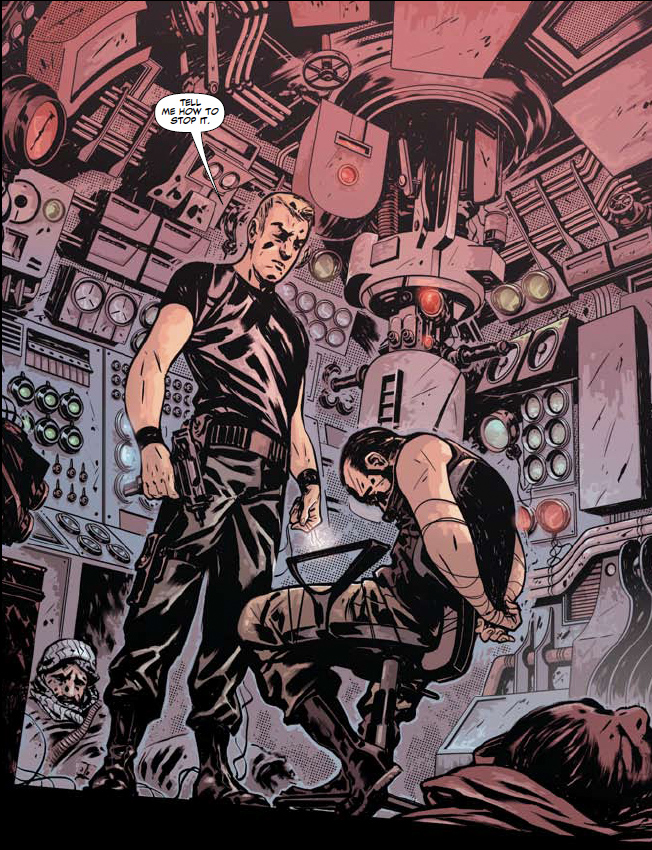 I’m going to start with what I usually end with, the art. I am absolutely in love with the art in this issue. Julian Totino Tedesco is fabulous and I’m feeling like an idiot for never having heard of him before. Dude is outstanding, with a style that is perfect for this “Trust No One” (especially your government) type of story. Look at that panel! Practically the entire thing is filled in with fantastic artistry. I think I just became a Tedesco fangirl. 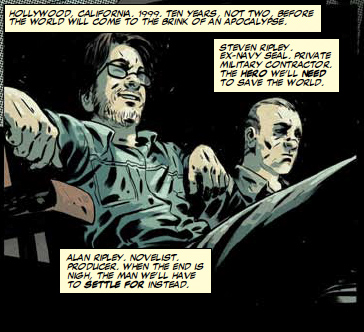 The story starts in 1999 where we meet Alan Ripley (awesome last name), a typical Hollywood type who just puts his work out there without ever really thinking about the effects it may have beyond entertainment.  We also meet his older brother Steven, who is thinking about the future and how messed up it’s going to get if things keep going the way they are.  Despite both brothers being on the cover of this floppy, Steven dies before the halfway mark of the issue.  I’m inclined to think he may show up at a later date (because that’s how these things usually work in the funny pages), but if he doesn’t, I’m confused why he was important enough for cover space. Moving on. 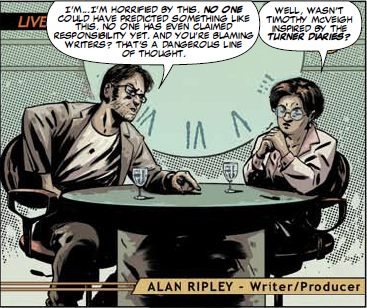 There are two elements going on in this story that I picked up on – not trusting governments and the responsibility of putting an idea out there for anyone to read/listen to/see. I’m curious to see if these are elements that are important to the overall story of Unthinkable or if it’s just something I’m interested in. During the first meeting of the Think Tank, Alan meets Sarah, a microbiologist. The conversation quickly evolves into theorizing how a terrorist could use a form of Botox injections as a weapon, leading to people with a face full of Joker Smile. By the end of the issue, something similar happens: putting crazy ideas out there for anyone to hear, and Big Brother has just a big enough set of ears to pick up what you’re laying down. This comic was made for paranoid conspiracy nuts like me. 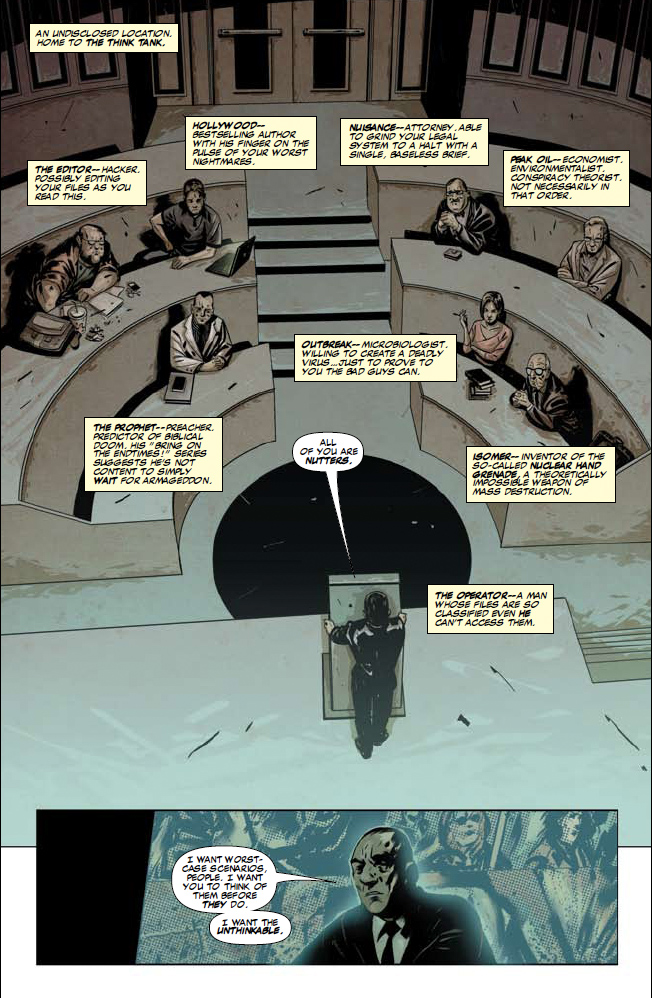 There are time jumps in this story, so we get exposition without it taking up the entire first issue. They don’t feel gimmicky, and it might be because the jumps go from something important to another something that’s important. The whole issue also has a nice building up to something nasty feel to it, like when a movie uses Hall of the Mountain King during a scene. Some pretty heavy stuff happens, but you just get the feeling you haven’t seen how bad it can all really get. And it feels real. Obviously, the use of real life events helps set that feeling up, but the way Sable handles the material plants the “Holy macaroni, this could totally be happening right now” seeds in your grey matter. I feel Unthinkable will be a shining example of why “smaller” publishers should be getting more recognition and press than they are. 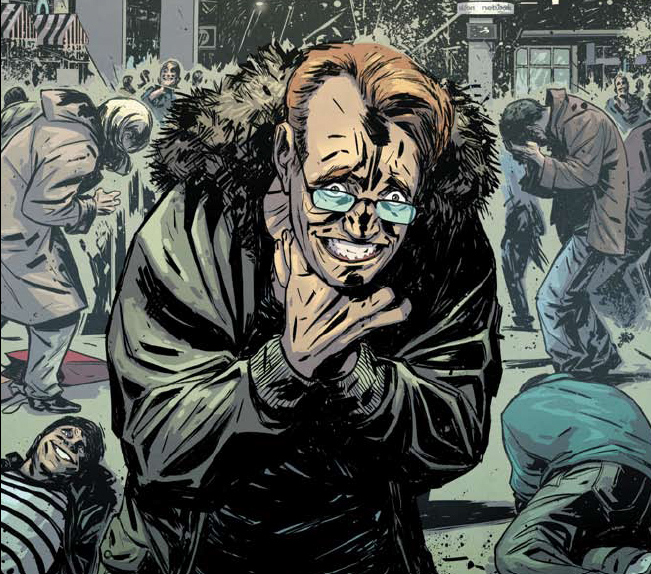