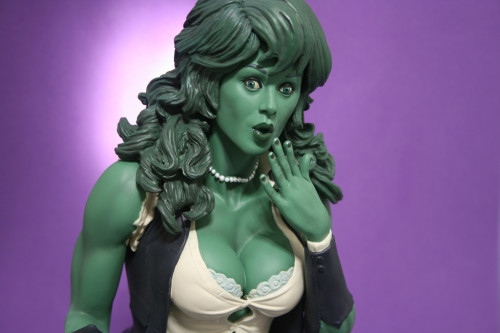 With the end of the year approaching, all the big collectible companies have been rolling out tons of awesome releases. The latest piece from Sideshow Collectibles’ comiquettes line is She-Hulk, and here’s a look at her in all her 16″ tall, limited edition glory.

She-Hulk is designed by Adam Hughes, an artist whose name has become as synonymous with collectibles as it has with comics. He’s the creative brain behind a number of current and past statue and bust series, including the first wave of Women of the DC Universe busts from DC Direct, DC Direct’s current Cover Girls of the DC Universe statue series, and Sideshow’s current line of Marvel statues. I previously reviewed Rogue and Jean Grey as the Black Queen, both from the Marvel comiquette line, and now it’s She-Hulk’s turn. 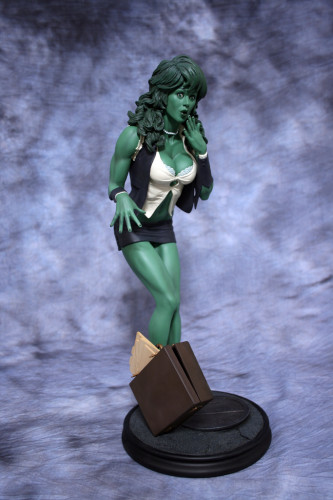 She-Hulk stands a full 16″ tall and comes in three pieces in the box: the base, a briefcase, and She-Hulk herself. The briefcase and figure both fit into the base easily via pegs. The whole thing holds up well, but I really hope the peg in She-Hulk’s foot is a stable and strong one, as the figurine seems extremely top heavy and likely to topple backwards without adequate support. The support does seem adequate, though, and I just chalk this up to another of Sideshow’s feats of engineering. Like all of Sideshow’s productions, this one is a limited edition, with 1250 pieces manufactured. There’s also an exclusive edition of the statue that’s limited to 750 pieces and that comes with a print of Adam Hughes’ control art for the piece. 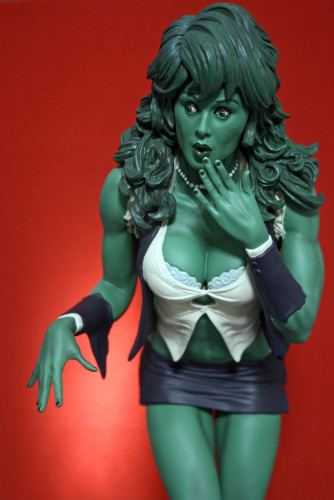 The first thing that struck me about this statue is that, unlike the vast majority of similar collectibles, this one tells a story. Most statues I collect are simple museum-style poses of pop culture characters, and it’s a rare thing to find a sculpture that actually has any sort of obvious narrative attached to it. With this She-Hulk statue, we’re seeing lawyer Jennifer Walters seconds after she accidentally Hulked out into her tall, green alter ego. She-Hulk has just dropped her briefcase, is in the process of bursting through her business suit, and has a shocked expression that creates the most Adam Hughes-esque face of any statue that’s been made from his art. 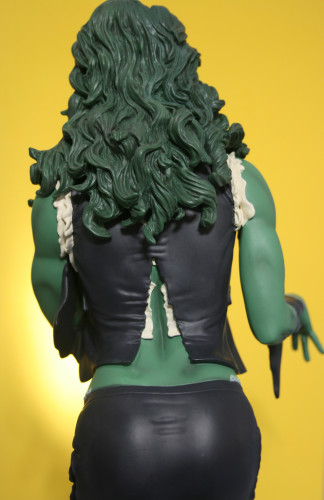 The second thing that I noticed is the design that went into She-Hulk’s outfit-burst. Sure, it makes for some funny and revealing cheesecake, but the rips and tears and stretches in the business suit look genuine and are pretty brilliant. The clothes aren’t simply shredded or exploded off her, Gen13 style. Rather, they’ve torn apart at seams and separations that convince me that a lot of thought actually went into drawing this thing up. Even Jennifer’s shoes are burst apart on the ground, the heels crushed beneath She-Hulk’s massive weight. It looks amusing and cute, but it also boasts a lot of impressive design considerations. 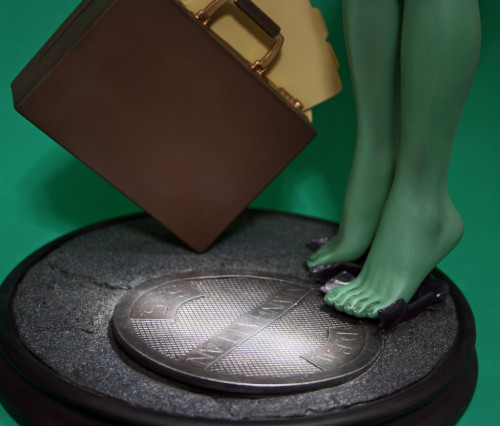 Also on the base, we have a Manhattan manhole cover, as well as Jennifer’s briefcase, which is just hitting the ground and bursting open. Several manila file folders are flying out of the opening case, and the minute detailing on all of these, down to the folder tabs, really is fantastic. The flying folders convey a “frozen moment” feel that the rest of the statue does a great job of completing. 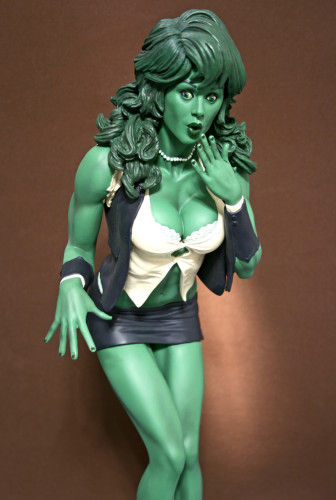 At this point, it almost goes without saying that the sculpting and paints are top notch. Sideshow produces some of the highest quality work in the collectibles market, and She-Hulk is no exception. The only aspect of the statue I’m not crazy about is that She-Hulk is sporting her big hair from the ’80s rather than her more modern look from the current comics. That’s just a personal quibble and doesn’t detract from the greatness of this piece. If you’re a She-Hulk fan, you absolutely need one of these in your collection.