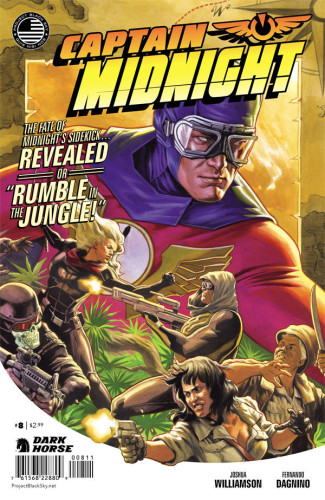 The eighth issue of Captain Midnight is about what could have happened to Midnight’s old sidekick, Chuck. In the last issue, Midnight had a scuffle with someone name Helios, who somehow had a piece of equipment Midnight made back in the 1940s. Midnight figured Chuck gave it to Helios, but Helios wasn’t answering any questions. So, Midnight has turned to Joyce, an old girlfriend.

Joyce’s granddaughter, Charlotte, is now working with Midnight. Charlotte brings Joyce to see Midnight and catch up on old times. Midnight waits before asking about Chuck. Joyce almost seems reluctant in taking about Chuck, but she does. In a flashback to 1986, Joyce is in Mexico looking for someone named Fury Shark, a female Nazi time traveller. It’s there she meets Chuck. 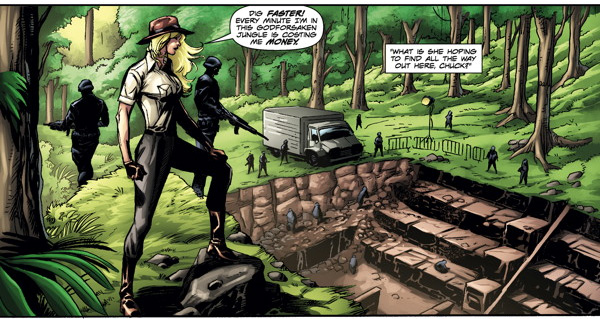 Chuck is also looking for Fury and running Albright Industries, which was the company that Midnight founded and ran in the ’40s. With him is Helios, from the last issue. Helios is a mercenary and a very dangerous one. It seems that perhaps Chuck did not give Helios any of Midnight’s designs because Joyce mentions the goggles Helios wears and how they were designed by Midnight. This only adds more mystery to Helios.

The trio finds Fury, who is digging something up. However, they are spotted and a fight breaks out. Helios uses his teleporter to destroy a lot of Fury’s minions, but it takes a toll on him. Joyce manages to kill a few more, but they are cut off before they can get to the Jeep. Fury taunts Joyce about her daughter and unborn granddaughter. At this point, Chuck steps up. 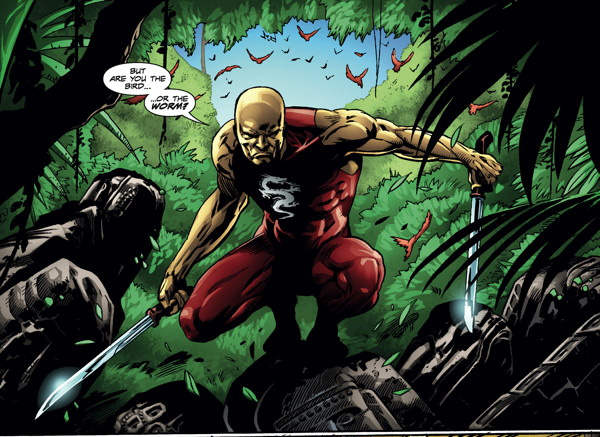 He says he knows what Fury really wants and can give it to her. Chuck goes with Fury, Helios teleports Joyce home, apparently going with Chuck. Chuck is never seen again. Midnight refuses to believe that Chuck willingly had anything to do with Fury and takes off to find him and confront Fury.

I liked this issue a lot. The flashback was fun and exciting. I liked learning more about the “old” sidekicks to Captain Midnight. Helios is a lot of fun as well. I hope we learn more about him soon. I’m still not sure if I like Midnight himself. He seems like kind of a jerk. He cut Rick, his new sidekick, off, saying that they’d go over old stories with Joyce later. He also doesn’t seem to think of the consequences of his actions and is kind of selfish. I suppose you could say that about other comic book characters, but it just rubs me the wrong way here. Perhaps as time goes on, I’ll like Midnight more.