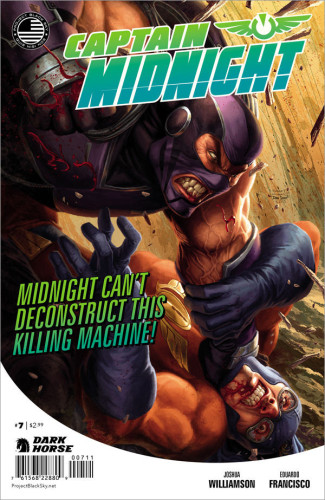 Issue seven begins with Agent Jones, still under the hypnosis or something, being brought in front of someone. That someone turns out to be President Obama.

The President explains to Jones what exactly was going on with Project Black Sky. An unknown technology landed around Lake Michigan. No one knew what it was, only that it wasn’t American. FDR commissioned the project, which led to Jim Albright being brought on to help. He used the unknown technology to become Captain Midnight. Then in the ’80s the project leaders decided they didn’t need to be governed anymore and went rogue. The President believes that Project Black Sky woke up Captain Midnight, for whatever reason. Jones is then allowed to have access to all records about the project. 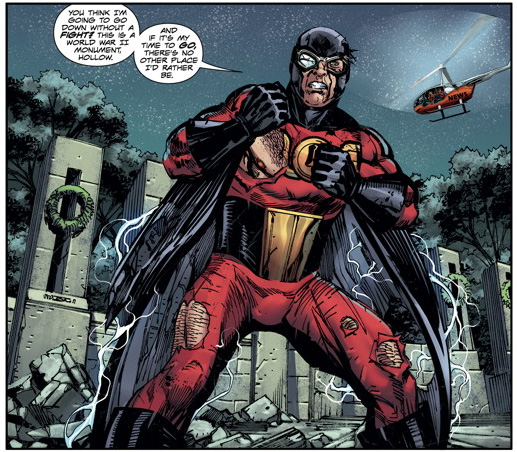 Meanwhile, Captain Midnight is getting beaten very badly by Hollow, but he still refuses to give up the fight. When some police approach, Hollow goes to kill them, but Captain Midnight gets back and stops him. They are destroying a World War II Memorial, which has brought in news crews and of course the military to try to stop it. We are also introduced to a new, mysterious character, Helios. He seems to be a sniper and is watching from a distance. Midnight gets inspiration from the Battle of Midway memorial and unleashes on Hollow. However, this isn’t enough to bring the villain down. Helios then arrives to help, but is swatted aside. Midnight does eventually defeat Hollow, but he’s more interested in Helios, who is using teleporter technology that Midnight himself came up with.

Jones shows up with an armed guard. Jones has been “promoted” from Agent to Mister, saying that he and Midnight answer to someone else now. The issue ends with two shadowy figures talking about Jones, Midnight, and Hollow. They seem to realize that Midnight is a threat to them and they never want him to learn what Black Sky was up to while he was gone.

I found the issue to be very good. I’m especially intrigued by Helios and whoever he answers to, since they seem to have gotten hold of Midnight’s technology and could be related to his companion in the 1940s. Learning more about Black Sky was done perfectly — readers know enough to whet our appetites, but not everything, leaving plenty to learn in later issues.