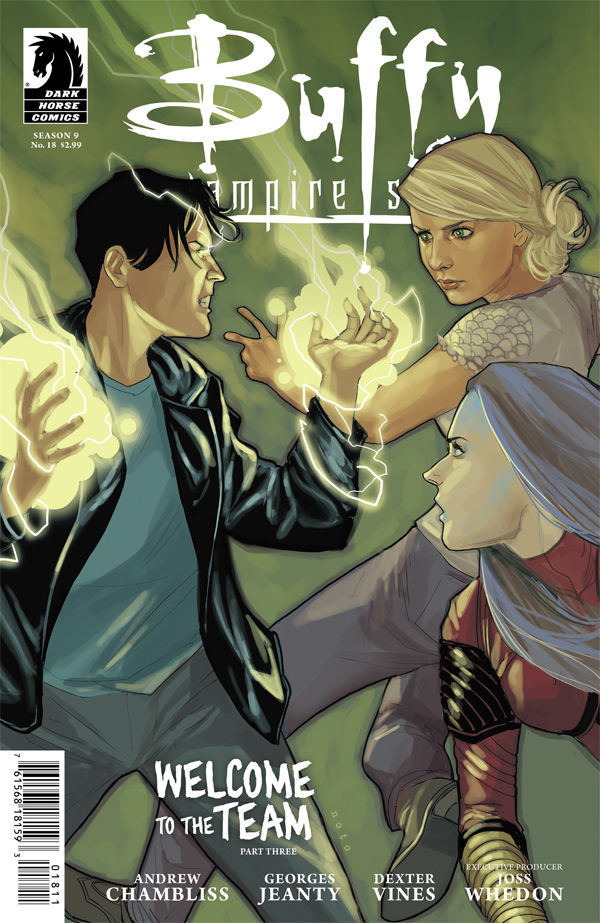 Plans gone wrong, unexplained illnesses, and a Slayer with self-doubt — it’s a full catalog of problems featured in this month’s issue of the Buffy comic. We got a bit more understanding of Sev’s motivations, but not much in way of answers for Dawn’s storyline. Hopefully all the pieces will come together soon.

There were three different storylines going on in this issue. First up, we had Sev and his ongoing mission to get all the power. Facing off against Buffy, Koh, and Illyria, he’s not about to be taken down so easily. Instead, he casts them aside and zeroes in on the one whose power he craves the most — Illyria. She’s got a few tricks up her sleeve, though, and manages to disappear before he can succeed in draining her. Thankfully she also spirits away Koh and Buffy from the scene before Sev can do any permanent damage to either of them as well. 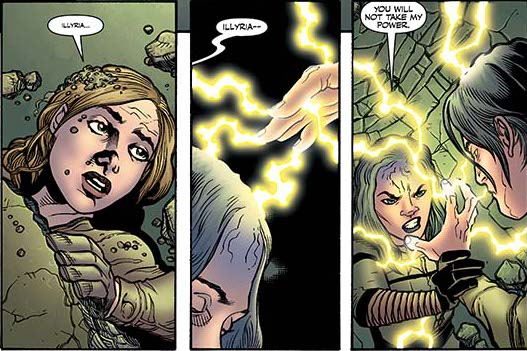 Once back at the Council, Buffy reveals that she thinks she knows Sev’s endgame. He already admitted that he’s doing all this to save his girlfriend, the one that died at his hands, so by gaining Illyria’s powers he hopes to control space and time. If he can go back and save his girlfriend, the future would turn out differently for him and all the others. While motivated by love, Sev’s plan cannot succeed and the Council has to make sure of that. Illyria’s solution is to use herself as bait and then, right before Sev attacks, Buffy and Koh will be zapped in to slay him. Good plan, but these things never work out the way you want them to. Buffy and Koh are transported elsewhere and Sev starts draining Illyria. Will she make it out of there alive? We won’t know until next month.

Meanwhile, Billy’s been trying to find the missing Slayer. He keeps running into dead ends, though, and his self-doubt is beginning to creep in. Anaheed wants to join him, to become a Slayer as well, but he is not so supportive of her career choice. He knows the trouble it takes to live up to the Slayer image when you weren’t born for it and he doesn’t want to see yet another person be brought down by the weight of the title. I’m always sad to see Billy doubting himself, especially since he has quickly become a favorite character of mine, but I understand where he’s coming from. He’s just a normal kid who is trying to do extraordinary things. It’s going to be hard and he’s going to have to push himself just to keep up, but I believe he can do it. As we saw in this issue, maybe he thinks he can do it, too.

The third storyline revolved around Dawn and her mysterious illness. The doctors are all baffled, as they tell Xander, because they can’t find anything wrong with her, yet Dawn’s body is shutting down. Xander cannot handle this, and it’s sad to see him fight against something he has no clue how to defeat. Is Dawn’s illness related to her magical creation? Or is someone gunning for her because of her sister? Why can’t she and Xander have a normal life? Xander even goes so far as to call Andrew to the hospital, in hopes he can figure out what’s wrong, but he’s just as clueless as the doctors. Instead, his solution is to put Dawn’s brain in a robot body, just as he did with Buffy. At least Dawn’s essence could be preserved. While it looks like Xander agrees with this plan, I’m not sure it’s going to work out. Yet again, plans have a way of going wrong. We’ll see what becomes of Xander and Dawn next issue. I’m hoping she doesn’t die, since Xander doesn’t look like he can handle one more loss at the moment. Normality was never in the cards for them.