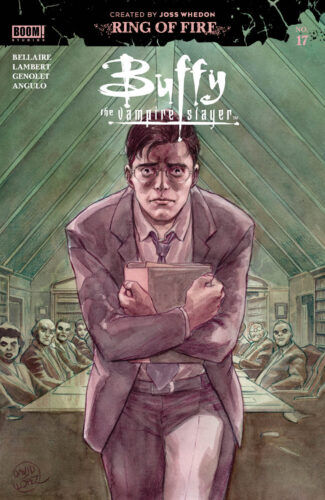 With a Wesley-focused issue, the characters of the Buffy universe are coming together and setting us up for some very interesting storylines to come. I look forward to seeing how the Watchers and Slayers interact. Drama seems a likely outcome.

We start off immersed in, what we later learn, is a fictional world of Wesley’s own making. He is casting himself as the hero in a fantasy-world story, set to overcome the monsters and dangers that oppose him. I find it interesting that his character, Weslarion, looks like a LOTR elf with all the finesse and coolness factor to boot. 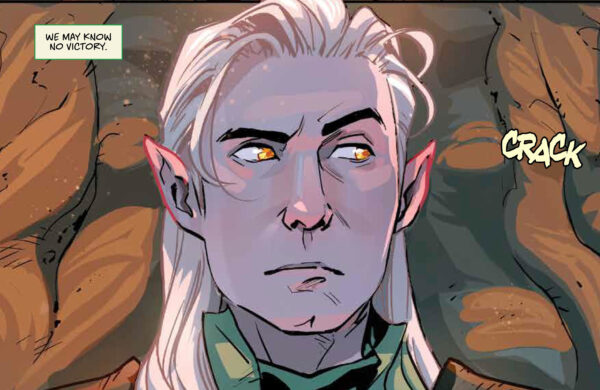 He is rudely brought out of his fictional downtime by Ghost!Ethan. While I am completely in love with the backstory of Ethan and Giles, and want to delve into that more during this timeline, I’m fond of the attachment Ethan has to Wesley. He aggravates the young Watcher, but he also tries to push him along to be all that he can be. Wesley has potential and Ethan sees that.

Ethan’s presence at this point is to send Wesley to the Council’s emergency meeting, which was moved up an hour and makes Wesley already late. The Watchers have a lot to deal with. They’ve got two Slayers activated, Buffy and Kendra, and Robin Wood is not available as an asset in the form of a Watcher, but instead Buffy’s boyfriend. And while Slayers are seen as expendable, Watchers are starting to die as well. Stephen Reilly, the last Watcher to an active Slayer prior to Giles, was killed the night before. That’s the third Watcher murder of the year. Something must be done. 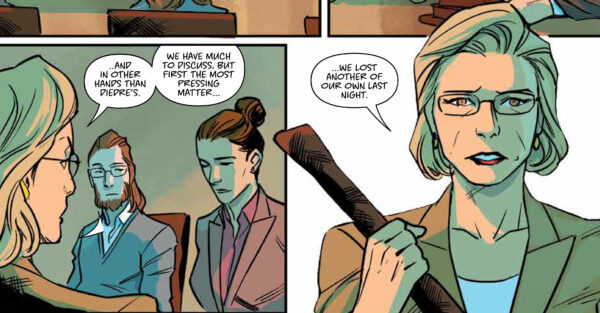 The Watchers assigned to work on the case don’t make as much progress as Wesley does on his own. He figured out that Stephen traveled to Bowie to visit his old girlfriend, a Revenge Demon named Raquel, after his Slayer Morgan’s death. So, someone killed Morgan and Watcher Charles Burke in Cleveland, followed Stephen to Bowie and killed Raquel Bennett, then killed Stephen back in Cleveland a year later. And the librarian admits that, among Stephen’s documented items to be sent back, his computer and encrypted files aren’t among them, so something is definitely up. The connections are there in terms of the murders, but who is behind it?

Wesley won’t be able to find out the answer, since he’s being reassigned. This one is a lifetime opportunity that he can’t turn down. When Kendra entered the Hellmouth, another Slayer had to be activated. That means there’s three active Slayers in play and Wesley’s been tasked to become the new Slayer’s Watcher. He’s given Bartholomea’s stake from the archives and sent on his way to meet up with his elusive Slayer. I look forward to seeing the introduction he has with her and his ability to try to keep her in line. There are surely exciting times ahead!