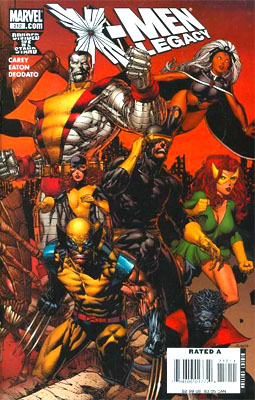 In the continuing adventures of Chucky Xavier Got Shot In The Head, Professor X goes on a desert road trip with Gambit. Spoilers after the jump!

What’s Going On:
After being shot in the head by Bishop at the end of Messiah Complex and then being saved and rebuilt by Exodus, Xavier has some funky amnesia playing with his mind. He’s now on a quest to rebuild his memories, and along the way he’s been getting into all manner of hijinx involving his past. Most recently he was attacked by bounty hunters and subsequently rescued by Gambit, now de-Apocalypsified.

Prompted by a hit list Gambit procured from the New Orleans Assassins’ Guild that lists Xavier’s name alongside Sebastian Shaw, the Juggernaut, and Carter Ryking, Xavier and Gambit set off to the place where all their fathers worked-a nuclear facility in Alamogordo. Along the way, Xavier takes some brain mush induced trips down memory lane.

How It Ends:
The bounty hunters jump Gambit and Xavier while they have stopped off for coffee and a campfire in the middle of the desert. As Gambit is getting the snot beaten out of him, Xavier wallows in the dirt and has another flashback, this time a recollection of Sinister standing over kid-Xavier and holding a scalpel while saying, “Good boy. We’re almost done.”

Thoughts:
Every couple of years there’s some event that comes along to make the X-Men hate Xavier. And on the off years from those events, there are events where Xavier regains the use of his legs, dies, or both. We’re currently in a leg usage, post-death phase, and I’m finding myself disappointed with the direction the main X-Men title has taken. Sure, Professor X is an integral character, but all this memory recovery stuff is making for dry storytelling. I’m not fully on board with the Legacy concept, and I really don’t like that it’s heading into retcon territory with this newest Sinister thing. The implication so far is that Sinister ran the facility where the parents of Xavier, Shaw, and the Juggernaut worked, and he might in fact have used his genetic engineering to “create” their powers. This closing shot of Xavier matches my frustration pretty closely. 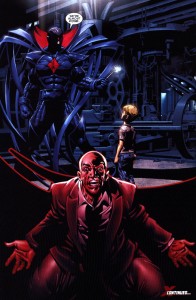