The Mythbusters are well-known for taking common idioms and adages and putting them to the test. Who can forget how Kari, Grant, and Tory completely busted the “bull in a china shop” idiom as they watched several bulls move carefully around shelf after shelf of breakable things without the slightest crack? Or the time that Adam and Jamie made a lead balloon that actually floated, proving that you can’t refer to something that didn’t go well as “going over like a lead balloon?”

In this episode, they’ve chosen two more sayings to investigate. When they’re finished, will we still say that we have cold feet when we are afraid to do something? Will we still talk about the poop hitting the fan to describe catastrophic results that affect everyone in the area? Keep reading to find out (or come back later after you’ve watched the episode if you don’t want to be spoiled).

Myth #1: When “the poop hits the fan,” everyone surrounding it will end up covered in excrement.

Procedure 1: In order to test this myth, Jamie and Adam started by examining the properties of poop — dog poop, in this case, since it’s easy to come by and is similar in consistency to human poop. Adam introduced us to the term “Excrement Metrics” as he explained the different properties of the dog poop that they measured in order to make faux poop — weight and density, compressibility, and stickiness. Knowing these figures, Jamie mixed up a batch of faux poop, complete with blue food coloring for effect. The test area consisted of an oscillating table fan in the middle of a white surround so that Adam and Jamie could clearly see where they blue poo landed. 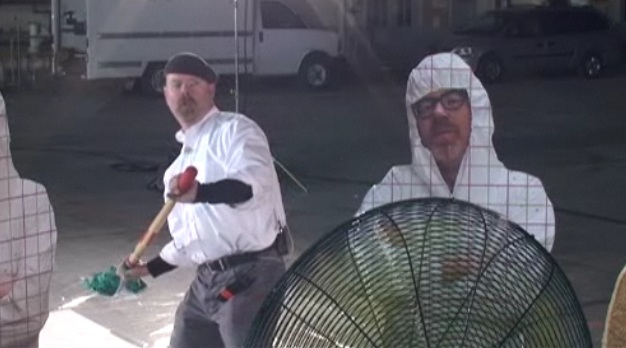 Procedure 2: The Mythbusters decided next to take out one variable — Adam’s poo-throwing — and test several others. Adam, after much trial and error as only Adam can try and err, ended up with a slingshot-type device that flung the poop at a consistent speed and was able to hit its target consistently. Using this rig and the previous fan set-up with the addition of quadrants marked onto the surround, the Mythbusters tested several variables — fan speed, direction of poop in relation to the fan, and the consistency of the poop being thrown.

Results: We were only shown a collection of poo-flinging shots, and no run-down of specific testing parameters was given for this segment of the show. We were told, however, that the best poop coverage resulted from soft poop being thrown straight at the front of the fan, although even then, there was no “universal coverage” of the surrounding area with the poop. No mention was made of the fan speed at which this best-case coverage occurred.

Conclusion: Under regular circumstances (i.e., poop being thrown at a regular fan straight on), when the poop hits the fan, it does not result in the coverage of everyone surrounding it with poop.

Procedure 3: Everyone knows that Adam and Jamie never stop with the initial result — if the myth is busted, then they figure out what it would actually take to make that myth true. They upsized this myth by taking their soft faux poop, an industrial-strength standing fan with big metal blades, and an army of plywood cutouts with Adam’s picture on them to an abandoned hangar. Adam and his cutout clones stood in a circle surrounding the fan while Jamie flung poop by the shovelful at the fan. At the end, for even more fun, they repeated the procedure with a giant industrial-sized box fan and flung the poop at it from in front and from above.

Results: In the first test, Real Adam, all of the Plywood Adams, Jamie, and the cameraman all ended up with poop on them. There were even nice blue flecks of faux poop in Jamie’s mustache. In the second test, coming at the very end of the episode, the results were of course spectacularly messy, and again everyone in the vicinity was covered.

Myth #2 — The temperature of your feet actually drops when you are faced with a situation or task you are afraid of.

Procedure: The Mythbusters subjected each other to situations in which the subject would be afraid or extremely uncomfortable. Before and during the test the temperature of the subject’s feet was measured two ways: using temperature sensors taped to one foot and data from a thermal imaging camera pointed at the other foot.

Control: All three Mythbusters had their foot temperature measured while calm and relaxed. Tory has a fear of heights, so Kari and Grant arranged for a stunt pilot to take him for a ride. Before the flight, the pilot explained the maneuvers he would be doing, the dangers involved in doing them, and emergency procedures. He then went up for a solo demonstration so Tory could see what he was in for. Tory got to experience such tricks as an inverted flat spin, loops, and an inverted flyover of the runway. Grant despises spiders and other creepy-crawlies. Kari and Tory, therefore, went shopping for bugs, and bought a box full of tarantulas that they then proceeded to drop into an acrylic box that they had first placed over Grant’s head. Kari is grossed out by disgusting things, and those things related to animals that can be eaten make her vegetarian self especially squeamish. Chefs Tory and Grant prepared a smorgasbord of various disgusting and slimy edibles, including chicken feet and abalone, complemented by a selection of live insects. She had to choose two things to eat, so she went for the bugs, sampling a meal worm and a cricket.

Results: The temperature sensors on Tory’s feet registered a slight drop in temperature before and during his flight. There was no way to secure the thermal imaging camera in the cockpit of the airplane, so no measurements were taken that way. Both Grant and Kari were able to remain barefooted during their tests, and both the temperature sensors and the thermal imaging camera recorded a drop in foot temperature over the duration of the test of fifteen or more degrees. All three subjects experienced a rise in heart rate during the test as well, indicating their fear or nervousness.

Conclusion: The temperature of a person’s feet does decrease when faced with a scary or uncomfortable situation. Myth: Plausible.

I enjoyed this episode more than the previous two, and I have very little argument with the results or the methods. Much of the fan testing was not shown, so I can’t say much about it one way or the other, but I’m sure we got the benefit of the most interesting parts of that myth. I especially enjoyed the secondary team’s myth — seeing Tory turn green, Grant try not to squeal like a little girl, and Kari try to hold down her lunch has a pretty high entertainment value.

There were also several great quotes in this episode that are prime candidates for commercials and show intros in the future, from Jamie, no less, delivered with his usual seriousness: when he came up with the perfect mixture for the faux poop, he observed that “my *bleep* don’t stink” and his hypothesis for the fan test on the extreme scale was that “there should be blue poo on all of these dummies — including Adam.” If you enjoyed previous episodes of idiom-busting, then this episode is definitely for you. As always, for behind-the-scenes information and poo flung at a fan from all imaginable angles, check out the video playlist for this episode at Discovery.com.