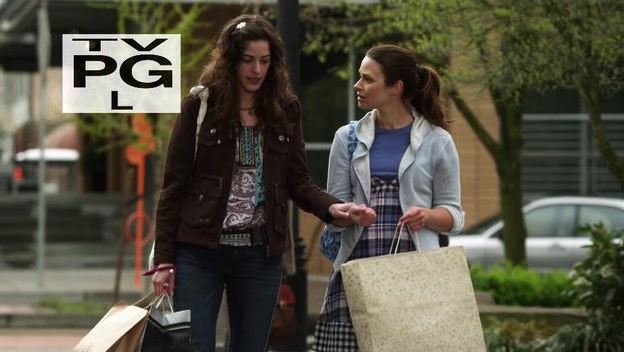 Ashley Moore’s sister, Lisa, dies while participating in a clinical drug trial for HT1. Her family tries unsuccessfully to sue JRP Pharmaceuticals, but Ashley doesn’t give up. She finds a Dr. Roberts, with whom she sets up an appointment. He gives her a napkin with a list of names, but then disappears. A couple of goons start chasing her, and she literally runs into Hardison, who realizes the goons aren’t FBI, and they spill coffee on Eliot… 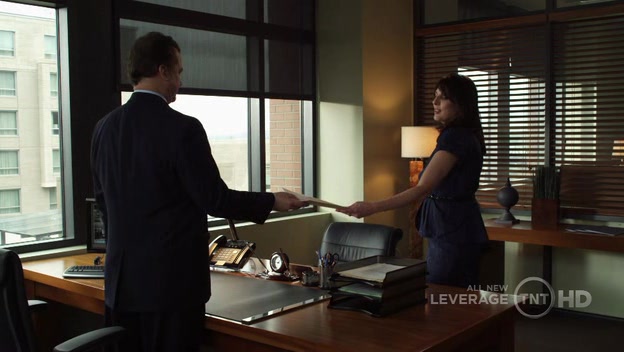 Hardison discovers that Hoffman, the CEO of the company that bought JRP, has rebranded HT1 as Vioplex and is about to get it approved by the FDA. And he’s had Dr. Roberts killed (the names on his list are others who died in the trials). So Nate and Sophie decide to run the “double blind” con (after rejecting the Swedish rail and the Cairo flyer). Sophie will get Hoffman’s confidence by posing as the FDA representative while Nate pushes Hoffman into leading him to the remaining samples of HT1 by pretending to be someone who knew Dr. Roberts. Upon finding the samples’ location, Parker swoops in to steal them, but she sets off the motion detector, leading Hoffman to retrieve the container. 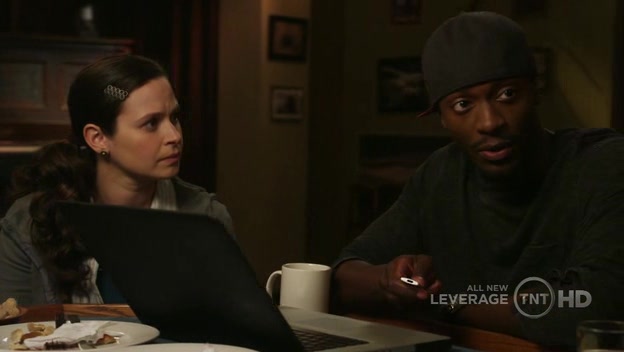 Ashley and Hardison prepare Parker for her role

Since it seems Parker was caught before she could take the container, Hoffman thinks he has discovered Nate’s plan to steal it, but Parker had actually switched the container for one with a false bottom. Nate tells Hoffman he’s poisoned his champagne with the HT1, and Hoffman discovers an empty container. While Hoffman, afraid for his life, tries to stop everyone at a company party from drinking the “poisoned” champagne, Hardison displays the files linking HT1 and Vioplex on the company video screens.

The real FDA rep sees this, Hoffman is arrested, and yet another corrupt CEO (and Hoffman was pretty bad, too — he as much as admitted to Sophie, who he thought was with the FDA, that he’s okay with paying lawsuits for wrongful deaths if it means more money for his company) working within the letter of the law (though certainly not the spirit) is brought down by a group of thieves who break the law in order to bring justice. Ashley even gets a whistleblower award from the FDA that Hardison suggests she share with the other families affected by the HT1. 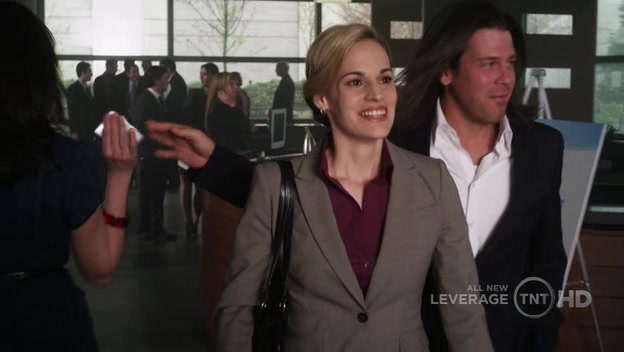 There were a couple of interesting sub-plots about relationships in this one. Eliot has to distract the real FDA rep so he takes her out for the day. It wears him out, having to go to all the stupid touristy places. The next day, she tells him she’s been on several of these “dates” with company guys, and what she really wants is someone who doesn’t just sit behind a desk all day. She wants someone adventurous who takes risks. If Eliot wasn’t already upset with the situation (and he was), her remarks certainly didn’t help. If only she knew! 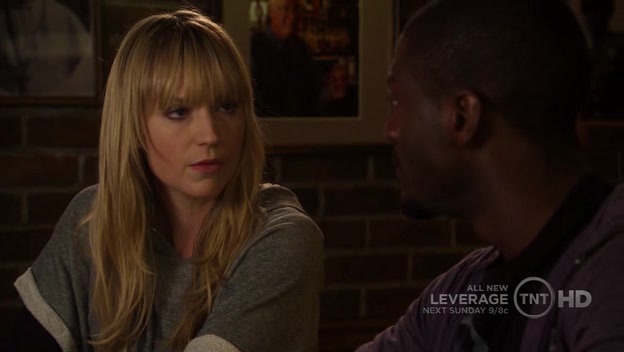 Parker tells Hardison she has "weird feelings" for... pretzels...

And then there was my favorite relationship: Parker and Hardison. The client takes an immediate liking to Hardison, and Parker doesn’t appreciate the interest. In the initial meeting with Nate, Parker has to sit in because she thinks Ashley looks like a terrorist. Or so she claims. Then in the end when Ashley says goodbye to Hardison, Parker and Sophie are sitting at the bar, drinking. Parker crushes her beer bottle (yes, bottle), all the while claiming not to be jealous. Sophie suggests that Parker should tell Hardison how she feels (pot, kettle, black, Sophie? I don’t see you talking to Nate…), and Parker almost does.

“The thing is, I think that, I might be having feelings. Like weird, weird feelings for…” she almost says “you,” but finishes with “pretzels” instead. Hardison’s response makes it clear he knows what she means, however: “Pretzels? Okay. Well, they’re right here,” he says, pushing a bowl of pretzels towards her, “when you want them.” I know it’s doomed, but I still love it!