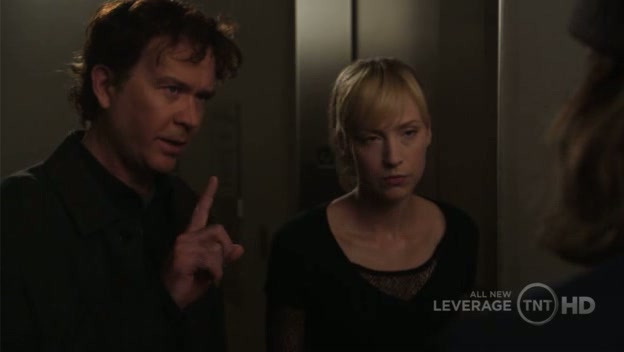 In this episode, the Leverage team is hired by a couple seeking to prove that Genogrow knowingly allowed unsafe fertilizer to be dumped in the water, leading to their daughter’s death. They have been fighting it for some time, but Genogrow’s lawyers are stonewalling, refusing to allow their data out because they are “trade secrets.” The couple’s lawyers have tried everything, but the couple is running out of time and money. Nate and company are up for the job.

Nate, Parker, and Eliot break in to the head of Genogrow’s (Haldeman) office. For some reason Hardison isn’t with them — and Nate doesn’t want his name mentioned. I was confused at first, and I actually had to double check that I didn’t miss an episode. I hadn’t; it just takes some time to reveal what’s going on. I’m not sure I liked that, but it was certainly an interesting idea. Hardison does come through just in the nick of time, right before they nearly get caught by Haldeman. We find out later that he was up all night playing the new expansion for World of Warcraft (“For the Horde!”). The team also overhears Haldeman’s plans to hide the proof of the unsafe fertilizer as well as get rid of or hide some asset that seems to be money.

Haldeman has put the asset on a plane, so Hardison books the rest of the team on the same flight. Nate (“Tom Baker,” according to his passport — his other passports are also actors who have played The Doctor. Nice touch since Hardison set them up) and Sophie (“Sarah Jane Baker,” sort of continuing the Doctor Who theme) play a couple so Sophie steals some luggage to make it look real (“Cuffs are his, whip’s mine,” she explains to security. The Doctor and Sarah Jane are into S&M — who knew?). 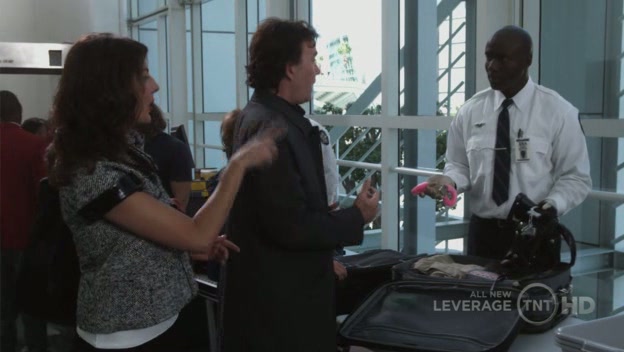 Eliot plays an Air Marshal since he already has the badge. And Parker is a substitute flight attendant. Her safety speech reminds me of a twisted version of Southwest’s — “Place the mask over your mouth and nose, and breathe normally… In the event of a water landing, your seat cushion can be used as a flotation device. But let’s face it, if this thing goes down in the water, more than likely the impact will kill you. Please take a moment to locate the nearest emergency exit… because if this plane’s on fire, you’re gonna wanna get out quick. Jet fuel burns at over 1000 degrees. That’s hot, folks.” The passengers are not reassured.

As it turns out, the asset that Haldeman put on the plane isn’t money. It’s people. One is an employee, Marissa, who discovered some discrepancies in the accounts that Nate realizes are actually bribes — the “smoking gun” they’ve been looking for. The other is the head of security for Genogrow. Haldeman plans to take them both out by taking out the plane. He nearly succeeds, too, but Hardison saves the day from 3000 miles away (“Man, I love it when a plan comes together!”), and the plane ends up landing on Seven Mile Bridge in the Florida Keys. 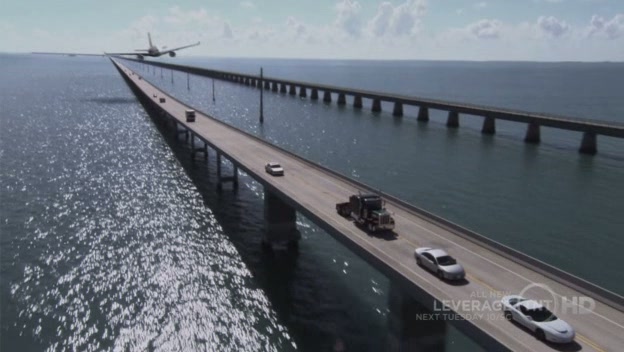 Sophie and Nate playing a married couple is like a dream come true for Sophie. But maybe not so much for Nate. She wants to create a back story for them based on their actual history, but he can’t seem to manage to get the details right for anything. First he’s off by two years for when they met, then he manages to confuse Tuscany for Paris (on this Sophie has a point — they’re certainly difficult to confuse!). “It’s a thing now, isn’t it?” he asks, realizing that he can’t possibly win, even when he’s right. Whoever wrote this episode pretty definitely knows something about married couples. 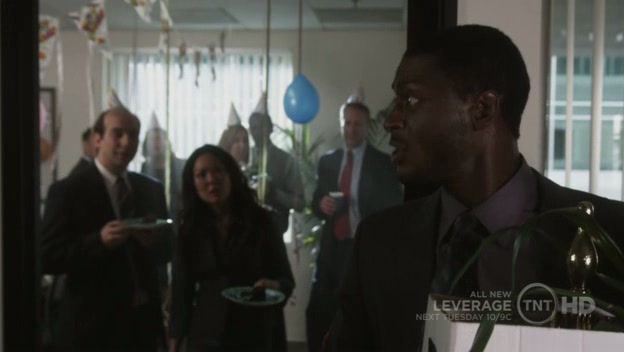 Despite his tardiness to the plan, Hardison really shines in this episode. He’s the one who stays behind and has to get the data from Genogrow that the rest of the team didn’t get before. To do this, he poses as an employee of the company. During the course of his time there, he manages to make a friend (a woman who also plays WoW) and an enemy (a guy who swears he saw Hardison as a janitor on the elevator before he saw him in a suit. He did — that’s how Hardison got by security — but Hardison loudly implies that the guy is a racist — “If I have to go to one more of those damn sensitivity seminars, I know who I’m blaming. You, I’m blaming you!”). He also begins a presentation about a new direction for the company, proving you don’t have to know what you’re talking about to sound like you do. He even sets up a birthday party for himself and gets himself fired (“And on my birthday!”). And, of course, he manages to recover the data from Haldeman’s office, using his party as a distraction. Not bad for someone who was up all night playing WoW.