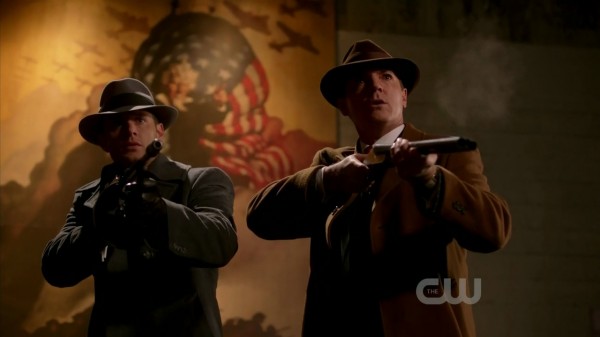 Gangsters on Supernatural? Dean must be time-traveling again. And indeed he was. This go-around it was courtesy of the God of Time, Chronos, and he ended up back in 1944 without a clue how to get back. But, like with all of their cases, where there’s a will, there’s a Winchester way. But in the meantime, Dean got to live out yet another fanboy fantasy.

I’ve been awaiting this episode ever since Nick Lea was announced as coming on board for a guest appearance. Krycek on Supernatural! It seemed only fair since they’ve basically gone through the X-Files cast over the past seven years to pull guest stars. My excitement heightened when I learned Lea would be playing Eliot Ness. Yes, that Eliot Ness. And then my excitement grew to extraordinary levels when I saw the promotional pictures of Dean Winchester dressed as a G-man. Yeah, this week had a lot to live up to. Good thing it did. 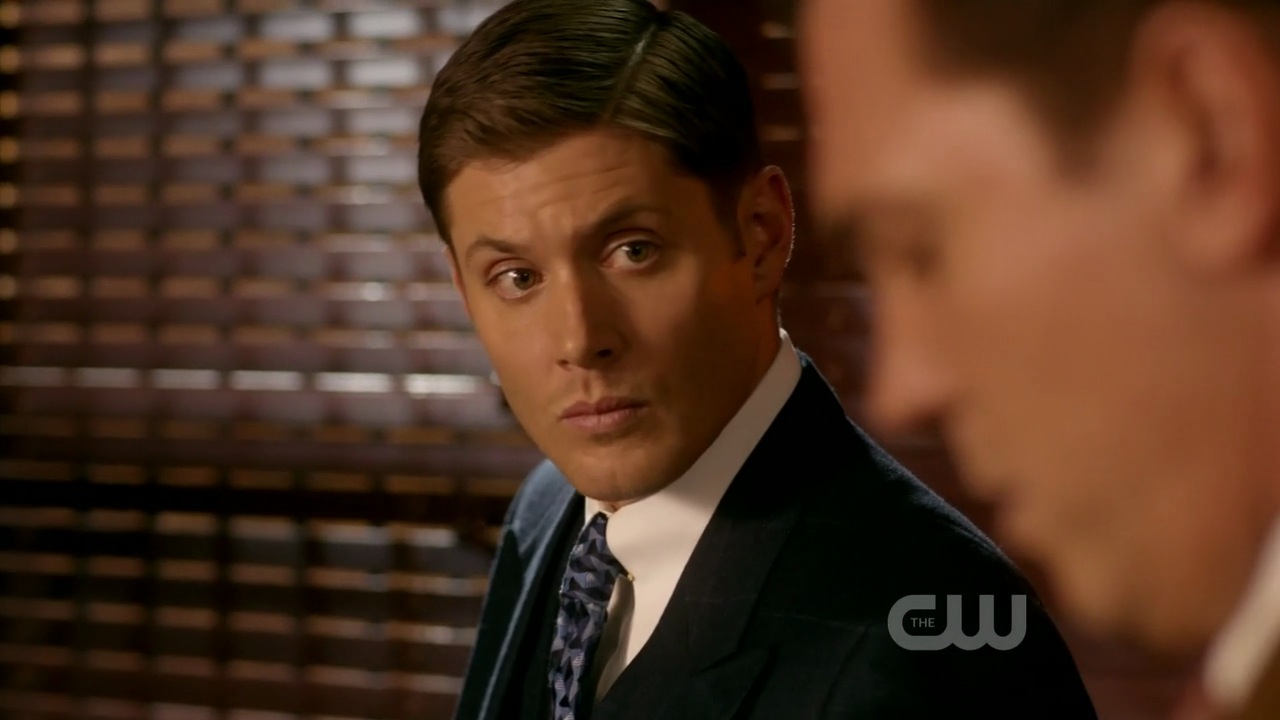 “I learned it from watching you.”

I feel like someone should sit Dean down and given him advice, number one being “don’t jump into glowing red cracks when you don’t know the outcome of such a move.” Sometimes you end up in an alternate reality, sometimes you end up in another dimension, and sometimes you end up in 1944. However, I adored Dean’s fanboy reaction to being in the presence of Eliot Ness and getting to dress up so he’d look like he belonged there. He thinks reality is like the movies every time he gets sent through time, yet it never is. And it was a nice twist to have Eliot Ness be not only be a famed agent, but also a hunter. A hunter who didn’t get into the life because someone he loved died, but rather because vampires were killing people and he had to stop them.

The storyline duality was set up well. Ness was hunting the same bad guy in 1944 that the Winchesters were hunting in 2012. And now Dean gets to help out Ness while Sam tries to figure out how to get his brother back home. If he fails, Dean will either be stuck in 1944 permanently or he’ll die at the hands of Chronos. Neither of those is an option, so Sam’s got to put his research skills to good use and find a solution. Too bad Dean hadn’t had time to teach his brother some of the skills he learned from Frank. I love it when Dean pulls out the smart card and surprises his brother with his intelligence. 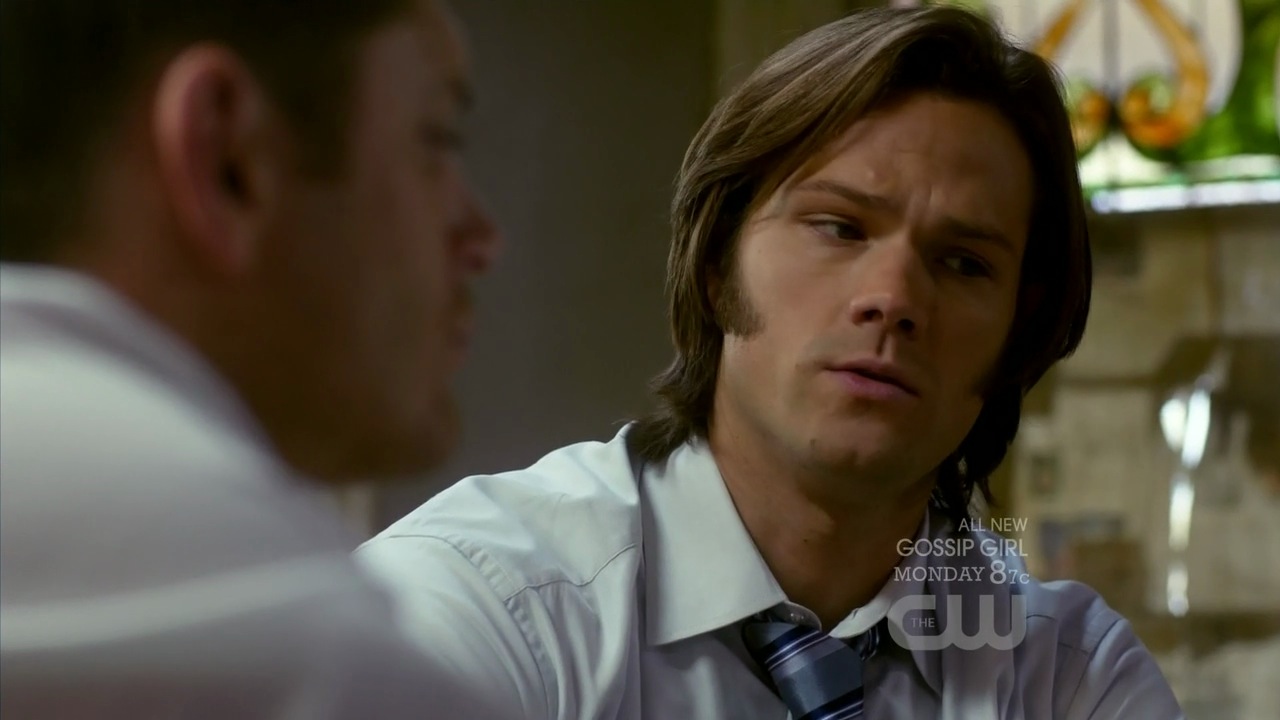 “You need to teach me that trick.”

But Sam isn’t alone in his researching. Sheriff Mills is back! She gave them the case originally and then, when she found out about Dean’s plight, she cleared out Bobby’s storage locker and brought everything to Sam in order to help him out. It’s evident that Jody misses Bobby very much and she had great bonding moments with Sam over their shared losses. It was nice to remember Bobby, and by extension Rufus, because they were two big losses in their lives and ours.

And as much as I and Sam kid about Dean’s entertainment choices, including his love for anime porn, it’s a good thing he does rely on some movie lessons in times of need. That old Back to the Future trick was genius. We saw the same thing back in the “Frontierland” episode, with sending a letter from the past to the present. At first I couldn’t figure out what Dean was doing, rifling through a boarding house bedroom and taking a pillow to the floor, but then it became clear. That was where Sam would bed down in 2012 and Dean had to get something in his brother’s eye-line to catch Sam’s attention. Carving Sam’s name on the board was a great tactic, as was leaving a dated letter with all Dean’s details. 11:34PM on November 5, 1944. Commit that to memory. 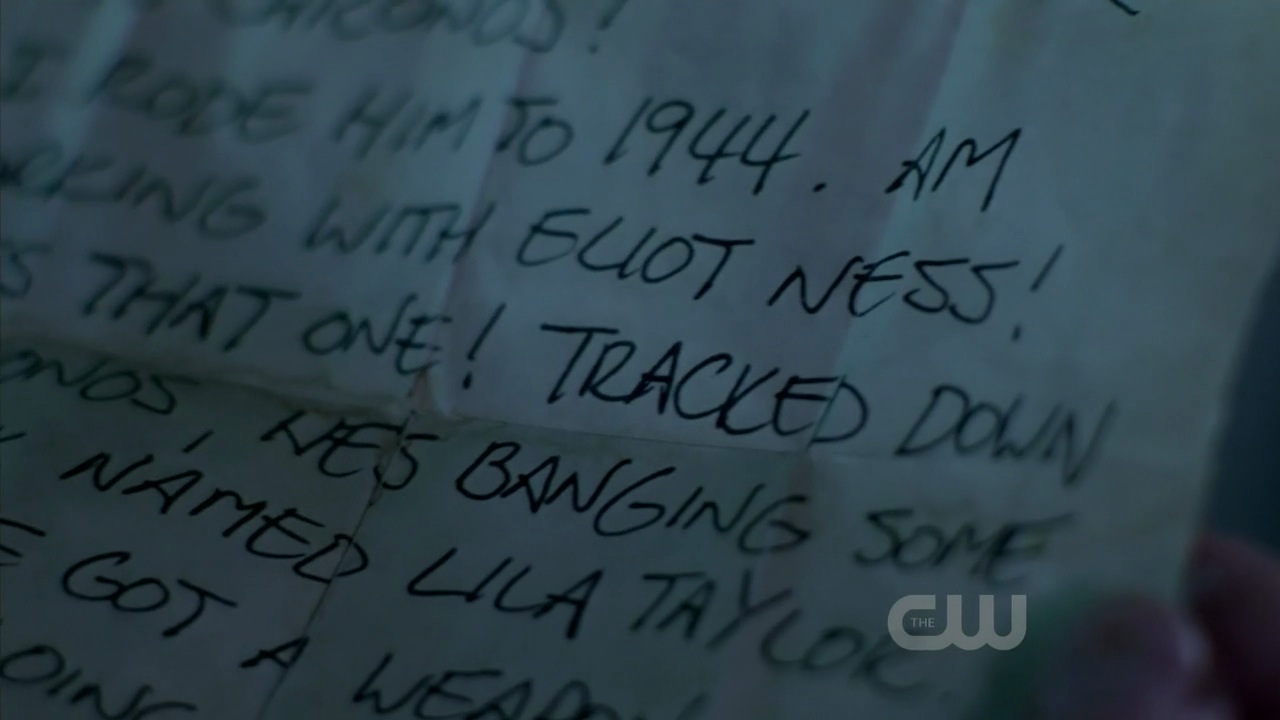 When Dean had his heart-to-heart with Ness, it was yet another person telling him to suck it up and stop feeling sorry for himself. This man is trying to emote and nobody will let him! Also, there was a subtle yet telling hint that all was not right with Dean Winchester. When he and Sam were playing Rock-Paper-Scissors to decide who would bunk where, he didn’t throw scissors. Sam threw paper and Dean threw rock. Had he played his usual game, Dean would have won. Sam was trying to let him win! He keeps trying to take care of his brother, while dealing with his own issues, but Dean is just too messed up to fix right now. It’ll take time for them both to get back on solid ground, but it may not be time they have. The Leviathans are coming and their future is filled with darkness. They’ve got to keep carrying on or else they’ll lose before they even have a chance to fight.