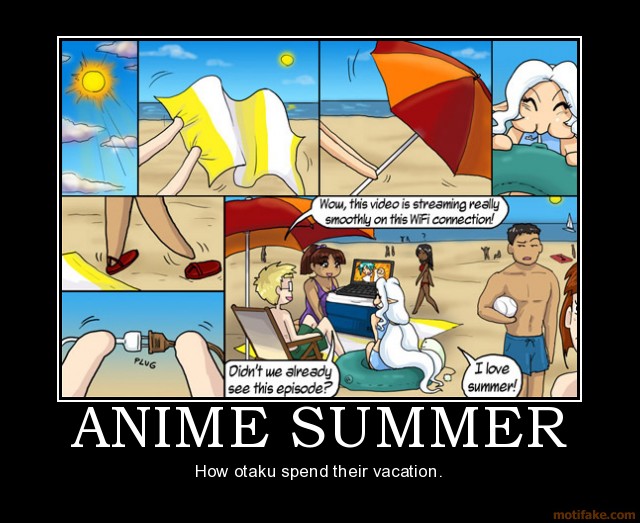 The best summer ever, or the BEST SUMMER EVAR?!

Hey, there fans! This week’s Happy Fun Thursday will deal not so much with Japan as it does with the anime coming out the land of the rising sun. This summer, while not constantly wasting my youth and humanity working inside an office (kidding, kidding) or doing silly and potentially hazardous things with my friends, I’ve been doing my best to start watching a few new shows that have been coming out recently. Sure, it’s all well and good to stick with the classics and fan-favorites all the time, like Rurouni Kenshin (aka Samurai X) or Fullmetal Alchemist, but sometimes taking a chance with an anime that’s literally fresh out of the studio (and airing at similar times in Japan) is a worthwhile endeavor, leading to a few diamonds in the rough.

"When I was a brand-new college freshman, I saw before me an infinite number of doors leading to that legendary treasure, the 'rosy campus life...'"

Adapted by the anime studio MADHOUSE from a light-novel by Morimi Tomihiko, The Tatami Galaxy is an anime about the life of a college freshman, seeking the cushy life of a college kid, namely one that will allow him to have many friends and a raven-haired maiden to call his own. However, his plans are usually foiled by his only actually friend, a demonic-looking fellow by the name of Ozu. All the while, he meets other characters, each stranger than the last, and tries his best to reach his goal. The main twist of this particular anime is that each episode is a retelling of the same tale, with slight differences to who the college kid meets and which club he joins to fulfill his goal of the “rosy campus life” he’s trying for, à la Groundhog Day.

Upon entering this particular anime, I quickly observed a couple of stylistic differences between this and others that I’ve seen. While some anime can be (loosely) compared to their animated American counterparts, this series seemed to resonate more with the more European and, dare I say it, artsy animated features out there. It seemed a little more… flat than some anime I’ve been seeing before. Story-wise, it’s really interesting in concept, with each episode revealing more and more of the problems the college kid, who’s unnamed as the anime uses the first person perspective to view this wildly animated and strange world, and why he just can’t seem to get the life he wanted in the beginning. I watched it on Hulu (where I first heard of it) and decided that it was interesting enough to watch until its odd, yet satisfying, conclusion. 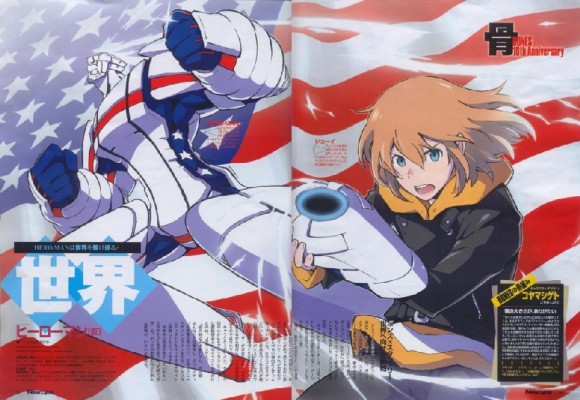 Joey Jones is an average American school kid who has a part time job in a café, gets bullied by kids at school, and lives with his grandma in Center City, California. When he chances upon a toy neglected by the bullies at school, he tries to repair it, christening it “Heroman.” However, thanks to a sudden flash of lightning (and a window that happened to be open at the time), the little toy becomes a full-fledged robot that only he can control! Then aliens attack the Earth right where Joey lives! Using his newly found power, he must fight back this alien menace and save the world, for Truth, Justice, and the American Way! *trumpet fanfare*

If this sounds like either (a) a Saturday morning cartoon in the nineties, or (b) something a comic book writer would have come up with, then your guess isn’t too far a cry away from the truth! The original manga the anime is adapted from is an original creation by none other than Stan Lee himself. It seemed that he wanted to create an American superhero, so American that the stars and stripes are literally painted on the side of the eponymous character, in the Japanese format, perhaps to introduce the pop culture of one side of the world to the other. Both the manga and the anime are produced by the same studio, Bones, so it’s no wonder that the show stuck so closely to the source material, as does the style of the entire franchise: it looks, feels, and even has the stereotypes (young orphan hero, cute blonde romantic interest, cool token minority friend, evil aliens) of a comic book superhero story and a Saturday morning cartoon. Which is cool. The series is available on Crunchyroll, unless you live on a tiny Pacific island — then, tough cookies. Annoying as it is, I find it hilarious that the series is so American that it be viewed unless you’re in the country itself. Even so, I watched it before I came to Guam, and, while it drags a bit, the action is pretty cool.

The High School of the Dead (Gakuen Mokushiroku) 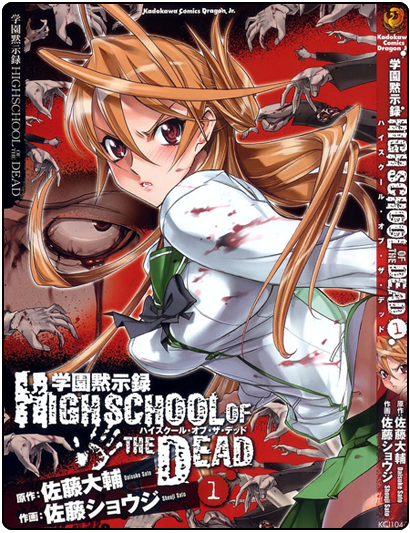 And with those words begins one of the most frighteningly gory and hilariously jiggly series I’ve seen, without having to hide behind a Internet proxy. The formula seems to be as such for this series: high-school setting + zombies + anime stereotypes + blood and gore + Gainaxing + panty shots + MORE ZOMBIES = awesome combination action/horror/ecchi series. It would be interesting to point out that I only tuned into this series because of the hype that surrounded it, and not just for the thrilling combination of bloody ultra-violence and oh-so-much ecchi that was promised by the source material, a manga of the same name. The action is graphic, as are the scenes of *ahem* questionable nature, and the viewer receives larges doses of both in the anime, as well as a few jokes here and there in order to lighten this series’s despairing and serious tone. It really, REALLY isn’t for the faint hearted, this one is.

Here’s the gist of it: A group of high school students are trapped in their high school as the zombie apocalypse ravages Japan, and they basically try their best to survive. They are pitted against the classic lurching zombie, with the exception that these particular ones are blind, relying on their hearing and large numbers to overpower and eat their prey. However, the zombies are up against Rei, a girl from a the Lancing team, Takashi, a boy from the baseball team, Saeko, captain of the kendo club, Kohta, the resident gun-nut, and Shizuka, the school nurse, a formidable team of kids who are quick to become friends in this world that’s gone nuts, for their sake and the rest of the world’s. The anime is available on the Anime Network, although, however fast-paced the heart-thumping, well-animated action is, I would only recommend to adults.

And that’s the newest anime I’ve been watching this summer! Tune in next time, when I reveal what I plan to pick up in the months ahead!